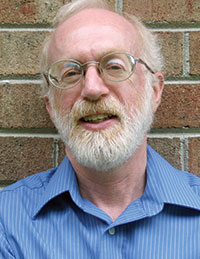 Eric Weil, son of a high school music teacher from New York City and a graphic artist from Boston, grew up near Cleveland, Ohio. He taught handicapped children for two years in Ohio’s Amish country, then moved to North Carolina, where he finished an MFA, and later a Ph.D., at UNC Greensboro. He is an associate professor of English at Elizabeth City State University. He and his wife, Anne, have two grown children.

“All politics is local” is a phrase we often hear, and “Not in my back yard” is another. In Ten Years In Eric Weil manages to “bring the war home” in a textbook example of what T.S. Eliot called “the objective correlative.” Ten years of a nebulous “war on terror,” with its concrete manifestations in Iraq and Afghanistan, is the conceit of this collection, and it worries these intensely realized eastern North Carolina poems like a sore tooth one cannot leave alone. Harking back to the best Vietnam era poems of poets like William Stafford and Robert Bly, Weil thoroughly and artfully inhabits his postage stamp of native soil while fully cognizant of the global geopolitical nexus in which he is enmeshed.

THE DESIRE FOR CHANGE

Ten years into the wars:
No child of ours is fighting,
and we are not asked to give up gas
or meat or metals, not asked
to buy war bonds. While others mourn,
remodel lives with wheelchairs or prostheses,
for us the war is background, 24/7 noise
between commercials’ yammering
about impotence and sleeplessness
and political candidates’ shortcomings.
No drug strengthens the national spine
to either fight all out or get all out.
Meanwhile, the body count rises,
and thunderheads of the heart
brew the desire for change.

We know we’re the aliens here.
Our neighbors warned us
when we started a walkway
through the swamp that there’d be snakes,
and today our first copperhead,
four feet long, tested our presence
with its tongue like some combination
of sentry and scientist. Even
expecting to see one did not stop
the chill, as we always see danger
before beauty, like a checkpoint soldier
looking for hints of an explosive vest
beneath the approaching woman’s burqa.
First to break the trance of stillness,
the snake retreated under ferns
a few feet off the path, and now
we step deliberately, knowing we share
this trail and any journey made on it.

We live in utter flatness.
I notice the cuts, ditches
that drain fields of cotton
and corn stretching sunward
like supplicants. The ditches slice
straight across the soil as if a giant
samurai had studied plane geometry.
Where the road tees to town and away,
three ivy-covered silos stand
like sisters in green summer dresses
waiting for their soldier-boys
to return from overseas.

AT THE BIRD FEEDER

One spring morning we find
the wrought iron stand
bent to the ground like a straw,
cracked corn, sunflower seed
scattered on still-dormant grass.
No raccoon is this powerful.
We stand on the metal elbow,
no effect, draw sharp breath
to say “black bear,” lean
swamp native, starlight
explorer, our boundaries
tested in his back yard