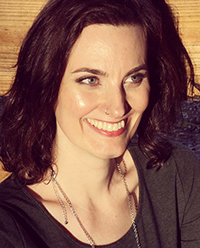 Amber Shockley is a graduate of the Queens University of Charlotte MFA program and has published work in a variety of print and online journals, including Rattle, Gargoyle Magazine and The James Franco Review. She was a featured poet for The Atticus Review, where she now serves as an assistant poetry editor. She has previously worked as a teacher in the public schools of South Carolina and as a burlesque performer in small clubs throughout the South. She lives in Rock Hill, SC.

Rarely are readers so generously gifted by a poet like Amber Shockley, who somehow manages to combine imaginative wit and accessibility with lyrical polish and a deep, resounding sense of humanity. Too often these days, intelligent verse comes across with all the warmth and color of an iceberg; here, though, is a poet who burns through the usual pretension and blandness like an acetylene torch. –Michael Meyerhofer, Ragged Eden

Amber Shockley’s poems are witty and wise, displaying a depth of psychological savvy, luscious images, sensitivity to the pleasures of sound, and surprises in language—all the pleasures we want in poems. Here’s a sample that displays these qualities as well as terrific story-telling: “Sex and suicide pacts seem more superfluous / than serendipitous. They’ve found the flatness / of rock music, of rebellion, of even a lover’s body. / They’ve dissolved the fizz that floats on dream, on word.” –Susan Ludvigson

Amber Shockley’s A Brief Catalog of Common People sings and singes with no apologies. Woven within the wreckage of happiness and hurt are lives that “crash and shatter/ their way through the world.” Shockley lines up these poems like shots and dares the reader to knock them back, one after the other.  Jon Pineda

Charles Fixes Oatmeal for His Wife

Gets to where my bones wake up and ache,
so that’s my alarm now.
I let the puppy out into the yard,
Christopher’s puppy that he named Ranger,
a lab mix that gnaws on wood, on everything,
but my oldest girl folded it up in a blanket
and handed it to me three days after
they put her son next to his daddy
so I keep it. She’s lost her mind, left town.
She says I don’t know and I’m safe
more than anything when she calls
but I don’t believe her on either account.
I tell her we’ll be here when
she gets back but I don’t know about
the furniture and I laugh real careful,
sort of like a chuckle but she doesn’t
laugh, she asks me to take Ranger
with me when I go visit Christopher
and I tell her I will but I won’t
because I haven’t visited in weeks,
not since I saw the plastic flowers
and balloons people were putting on
the graves out there and got disgusted.
People can do better than that, or just
do nothing. But me too, I’m just as sorry
because I heat the oats in the microwave
like the home nurse taught me instead
of on the stove like Patricia always done.
I tell Sheila how I put some sugar
and a little cinnamon in it, about how
her mother likes that, I can tell
because her eyes perk up and she opens
good for a wide bite, and on the other
end of the phone I hear Sheila get that
quiet she gets now, and then she says
the first thing she’s said about her son
since he’s been gone. He liked that, too.

I figure everyone deserves
a pen pal, and that’s how
it got started. The stamp
had a smudge of blood
from where he bit his nail
down to the quick, nothing more.
I thought about how he hashed it
out with his wife, axed
her through the skull, of course
I did, but what damage can a man do,
locked up in bars and a blue jumpsuit?
I’ve never felt safer.
We’ll not ever touch, and that’s fine.
It sparks a man’s imagination,
the out-of-reach, you should see
the things he says! It’s sweet.
If only I could get out of here,
I’d hold you and
Send me your panties.
The warden didn’t appreciate it
when I tried that, I can tell you,
and I was embarrassed, but
isn’t that the best thing about love? –
the shame.

Two words: phantom limb,
so I still feel my toes curl
when I’m coming. Like newlyweds,
my husband hefts my half-body
over the threshold of our door.
He says it doesn’t matter,
the matter I’m missing.
I bulk up my arms, some kid
at the grocery store sees me swing
from my chair to the motorized cart
and quips, Look mama, a gorilla!
Little shit. I haven’t yet gotten
the handle on grace. I’m still high
on the power of discovering
a certain rightness of legs lost –
both the levity and the gravity
of my cunt closer to the earth.