A Generation of Insomniacs

This title was selected for publication after finishing as a finalist to the 2013 MSR Poetry Book Award. 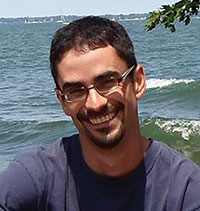 Anthony Frame is an exterminator who lives in Toledo, Ohio with his wife. He is the author of the chapbook, Paper Guilotines (Imaginary Friend Press, 2010) and the editor of the online journal, Glass: A Journal of Poetry. His poems have appeared in Third Coast, Harpur Palate, diode, Versal, Conte Online, Side B Magazine, The Splinter Generation and The Blue Collar Review, among others. This is his first full-length book.

Anthony Frame’s A Generation of Insomniacs is a tough book that earns its toughness only so it can break your heart. Terse, tight, honest, unflinching—these poems search for authenticity in a world filled with dishonesty and hypocrisy, and isn’t this the job of any poet? While this book is generational—the generation of Kurt Cobain and grunge —it explores the complex world of adolescence with compassion and authenticity that cross all boundaries of time and place. Frame is an astute chronicler of his generation, and his place, Toledo, Ohio, with a keen eye for the telling detail—these poems jump off the page, they sizzle and crackle with electric life.

In A Generation of Insomniacs, Anthony Frame’s kinetic and daring debut, poet and reader alike rediscover “an America defined/by our songs instead of these maps.” At times expansive, at others purposefully frayed and raw, these interrogative poems blossom with gritty lyricism and an unmistakably original voice. Indeed, Frame’s voice is an authentic and searching one—a voice that “won’t stop/screaming as long the moon survives.”

How to Write a Poem in Toledo, Ohio

Start with the churches, those brilliant buildings
standing at the center of every neighborhood.
Forget about the priests, except that geezer

who murdered the nun thirty years ago,
his retrials repeating at least once a decade.
Hang out with your union-hating buddies,

get them drunk on Buckeye Beer and spend
three hours calling them fascists. Learn how
to hop fences as a child. As an adult,

learn how to hop curbs in your 4×4.
In high school, excel at earning Cs.
Then get straight As in college before

dropping out like your father (if your father
wears a suit like my father, find another hero
to satisfy your bullshit bohemian worldview).

Eventually, you’ll have to park at the K-Mart
where the toughest kid in school admitted
he was in love with me, a light from the bell tower

of a nearby church shining halos on us,
or so I like to remember it. Tell your teachers
you’re making films about your suicidal friends.

Always use the word film so they can see
the New York skyline in your eyes. When you talk,
talk a lot about Jean-Michel Basquiat,

even though you can’t correctly pronounce his name.
Only shop at local stores that still wear
the Toledo Pride stickers because, here,

pride is a bumper sticker you can brand your car with.
Become addicted to something that reminds you
of sitting on your father’s lap. If you manage

to leave, don’t forget your blue collar genes,
tight as denim, sharp as a vinyl needle.
Here, we fray. Here, we rust. Remember that.

during our last summer before college.
Now, as staticy speakers announce your plane,
I’m tracing constellations across the dimples
on Toledo Express Airport’s ceiling to forget

my best friend is leaving forever. Some ghosts
learn to fly without losing their bodies.
As you cry, I stand and search this secret crowd
for a space to remain a man. Sometimes,

we’re wrong and evolution forgets who is fit,
who has a Jacobsen’s Organ to smell
this country’s contradictions. There’s weakness
in these numbers, in this wingless morning,

in this generation lost beneath a sky filled
with clouds blocking the stars. I want to cry,
to bite off my tongue and spit it in Darwin’s eyes,
but I can barely hold this friend who shivers.

Second straight day of snow to welcome spring
and I’m on the road at four in the morning,

filling my city with pesticides (what
must my university friends think).

the hand tank full of chemical. Even
the library isn’t safe (forgive me,

Rachel Carson). Tomorrow, I’m back
to teaching, one last month of students.

about the weather, prove I can still
deconstruct this storm with Queer Theory

Yesterday, as the snow started, mourning doves
briefly mated in my yard. A slow robin

watched between worms (I was watching, too).
Work is work, blisters or not, so I’m doing

forgotten you). Some silence is still needed
for poetry, philosophy, punk rock

(soon, my students and friends will understand).
Tomorrow, I’ll extend the blackboard,

draw a line all around the room to connect
the dots. My work is from the textbook

to City Hall back to my students’ bedrooms,
to the mourning doves (which dot am I?).

Just like this chemical, this infant morning,
I barricade this library (roach prevention).

The tank is still heavy as I finish this job.
Snow, don’t stop. Cover this green country.