The Advance Sale Discount price expired September 2020. For those who prefer to pay by check, the price is $16/book (which includes shipping and applicable sales tax) and should be sent to: 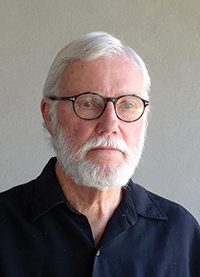 Don Thompson was born in Bakersfield, CA, and has spent most of his life in Kern County. He has been publishing poetry since the early sixties, including a dozen books and chapbooks. Back Roads won the 2008 Sunken Garden Prize. He was the subject of an LA Times profile, “Planted in the San Joaquin.” He and his wife, Chris, live on her family’s farm near Buttonwillow in a house that has been home to four generations. In 2016 he was selected as the first Poet Laureate of Kern County. His website is San Joaquin Ink (www.don-e-thompson.com).

The gratitude I feel towards the poems in A San Joaquin Almanac doesn’t just have to do with Don Thompson’s inventiveness; nor is it merely a matter of the book’s compelling structure: a month by month embrace of the seasons. Perhaps it’s because of how he reveals the capaciousness of his feelings with poems that in some ways are prescient and instructive, in other ways ironic. Thompson’s poems have those kinds of epiphanies. ~Joseph Zaccardi

1.
July’s heat is unrelenting,
harsh as a Calvinist uncle rapping his knuckles
on your skull until it aches.

Lizards want no part of afternoon.
They cringe in scratchy wool shadows.

And thousands of cattle on the hills
have fallen short of the slaughter house,
perished in the swelter,
their carcasses quickly mummified—
desiccated inside and out
before they could begin to rot.

2.
Humankind can do better, somewhat,
especially those who lollygag under the A/C,
sipping iced tea from a thermal cup
guaranteed to keep its chill around the clock;

who drive toward mirage oases,
half-believing in them;
who listen to the susurrus of tires
on soft, sticky asphalt, reminded
of mountain streams visited in childhood;

who never doubt that subterranean breezes
will waft their way forever,
rising from under the dashboard
as if from a bottomless cavern.

But random isolated elderly nonentities
will die like those cattle on the hills
with nothing but a cheap table fan
and tap water the temperature of blood.

3.
Indigents have vanished from the streets
into their burrows.
Some rub their fetor into library lounge chairs,
seeding them with fleas.

Some are deep in the weeds,
insiders, connoisseurs of oblivion
with earned doctorates in wasted life,
who roll their own smokes
with strips torn from their PhDs.

Others are down by the river,
still frigid from melted snow
high in the Sierras.
Hidden in the shadows under a bridge,
they soak their bare feet,
distracted from July for an hour.

1.
No kitsch painter could catch this light.
The air’s suffused with it
below the streetlamps on a vanished corner
in November, 1951.

It hums under the evening’s breath
with a faint rasp of static.
An almost-mist glitters like sparks.

Nor could anyone still have a sample,
a swatch glued into an album.
So it’s up to memory to do what it can,
not just to recall this light
lost among childhood’s unkept keepsakes,
but to re-envision it.

2.
And in this light, so elusive,
that no painter has ever faked onto canvas,
this irrefutable satin gloss
that lit our town on autumn evenings,
newsboys claimed every corner.

With more panache than Shelley,
more insolence than Rimbaud, that punk,
half of them wicked little Villons on the make,
they loved language
more than our gray flannel poets did.

Their brash voices carried in the crisp air,
hollering the local rag’s masthead—
disembodied like ghosts without a grudge
who wailed for the fun of it;
caressed long vowels and extended them,
red-faced, and made sibilants sizzle;
affected Cockney glottal stops,
Dickensian guttersnipes strutting
with their caps on sideways.

3.
All of this as strident as sirens—
loud enough to hear faintly this evening
with inner ears
that miss most of what’s said out loud,
with cold bones in this warmer November,
its light without incandescence,
soulless perhaps: de-illuminated,
a substance to which you just add darkness
that provides a substitute—
Light Lite,
much too weak for worn-out eyes.

1.
Migratory water birds come and go,
autumn and spring—sometimes
dawdling south just ahead of winter
only to return early, in February
while there’s frost
on the dead grass that sustains them.

Usually they pass by without pause,
struggling to keep their V formation together—
shakier than Mom’s handwriting
in her last, half-blind years.
She’d lean down, concentrate,
with her face almost on the paper,
and scratch that illegible v
in love.

Sacerdotal doves in dust-colored habits
pray in Latin
(in Latinate vowels anyhow),
heartfelt, simple supplications
that illiterate medieval peasants
could have understood.
No one even listens anymore.

This month the Wildlife Refuge
resembles a bus terminal—
either deserted except for one bundled old woman
with nowhere else to sleep
or crammed with all sorts of drifters
with their last chance knapsacks,
sipping cold coffee from a paper cup.

Sometimes not even migratory birds
seem to know where to go next,
swimming at random among the Tule reeds.

3.
When we lie in our last illness;
when consciousness, that pebble,
plops into dark water
and the ripples spread out
into nothingness,
mud hens skittering every which way,
will the pebble miraculously
float?

When the crows take care of business
that no longer concerns us;
when thousands of sparrows have fallen
and the bare trees
are nevertheless in leaf with them;
when owls look askance
and no longer see us;
when hummingbirds in the bottlebrush
bounce on the air
and dip their beaks into hidden nectar
without us to taste it with them,
maybe
we won’t be goners after all
but somewhere in transit,
easily holding our place in the V.