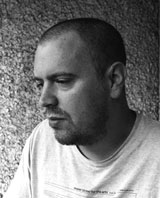 Okla Elliott
Okla Elliott is currently the Illinois Distinguished Fellow at the University of Illinois, where he studies comparative literature and cultural theory. He also holds an MFA from Ohio State University. For the academic year 2008-09, he was a visiting assistant professor at Ohio Wesleyan University. His drama, non-fiction, poetry, short fiction, and translations have appeared or are forthcoming in Another Chicago Magazine, Indiana Review, The Literary Review, Natural Bridge, New Letters, North Dakota Quarterly, A Public Space, and The Southeast Review, among others. He is the author of two poetry chapbooks–The Mutable Wheel and Lucid Bodies and Other Poems–and he co-edited (with Kyle Minor) The Other Chekhov.

The “geography” Okla Elliott offers us in this fine group of poems is anything but vulgar in the ordinary sense. Instead, what we are given is a sophisticated mapping of those little-traveled regions of the psyche where anomie, yearning and regret extend in exquisite juxtaposition, a territory where small causes wait like landmines to have terrible effects. Elliott often will prefer (in Wallace Stevens’ phrase) the beauty of innuendo, and he is expert in the uses of indirection, but what gives this work real strength is the emotional honesty with which the poet explores–in language that is vulgar only in the sense of being simply and commonly shared–the tricky landscape of a human heart.

Three lanterns floated in the dream she told him, but he didn’t want to hear about lanterns. He wanted factories unbuilt, windows smashed open. He wanted libertine wailings. She denied being a builder of factories, but he knew her reputation. A wind blew in from Montreal, or she said it was from Montreal, said she could smell the bars of Rue St Laurent. He was skeptical but didn’t want to argue. What good are arguments on a Saturday night? What good are arguments at all? She told him again about her love of the French language, and he thought maybe they were getting somewhere. The modern sunset outside her window was spilled wine tinged with pollution. They went down the mountain to town, found the trouble she had decided they wanted. She called a homeless man a fallen Chinese god, and they mourned his sad descent, forgetting (almost) their own. That is the power of generosity, one use of our idiot faith in human love.

Why have you raised up my son Gilgamesh and laid on him a
restless heart that will not sleep?
Now you push him to go
on a long journey to the place of Humbaba,
to face battle he cannot understand
and travel a road he cannot know…

Gilgamesh calls out to us
warns of the unknowable he now knows
and of the battle with Humbaba
we are going to lose.

Humbaba’s seven cloaks conceal
his seven attributes.
He takes off one layer and slows,
revealing a further demise.

His face of sickening eels,
his hatred fuller than the ocean.
The blood of his million million victims flows
in his brain as his own.

We will fight Humbaba, like those
before. We will fight, but our hopes
are an empty arsenal.
This is a war we’re meant to lose.

It sets a mood
of clownish tragedy,
of ecstatic failure waiting to happen.

It is not a static blue light
nor the throb of a strobe.

I would use it to look for you
in a cave or catacomb
or an ossuary crowded by the famous dead–
that is, if you were in such a place,
I would use this light to find you.

It is mixed from an overcast morning
and the electric urban dusk.

It is a light I could live in
if I came to terms with certain failings
in my character
and the character of others.

I know you have light where you are,
better light even,
but I wanted you to know
about the light here.