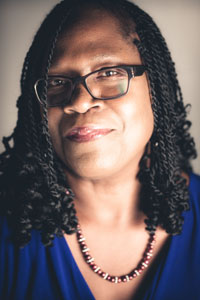 Jacqueline Johnson, is a multi-disciplined artist creating in both writing and fiber arts. She is the author of “A Gathering of Mother Tongues” published by White Pine Press and is the winner of the Third Annual White Pine Press Poetry Award. She is a graduate of New York University and the City University of New York. Her work has appeared in Fifth Wednesday, Callaloo, Renaissance Noir, Tidal Basin Review and The Wide Shore. Ms. Johnson has received fellowships from the New York Foundation of the Arts, the Mid Atlantic Writers Association’s Creative Writing Award in Poetry and McDowell Colony for the Arts. She is a Cave Canem fellow. A native of Philadelphia, PA., she resides in Brooklyn, New York.

“Unapologetically woman and forever an educator, Jacqueline Johnson’s poems span history and define geographic borders. Fierce and independent, the poem celebrates other artists, other poets, the life of people and things that matter, that we should all care about, a wordsmith’s journey in which words are the landscape as well as the road.”

“Five hundred years of black women reside” in A Woman’s Season, following the “Ancient path the goddess travels” and “listening to the /orchestra of all living things.” Here, “beneath [their] masks a monsoon gathers,” here the “yet open fields of our future billow.” Here are poems not in need of a drum for accompaniment, for they are “chant, / sea-island moan, / a priestess prayer song.” Listen.

Tussling seasons trying not to
become the burning in
Buddha’s saffron robe. Mystic
drone of a poly string banzatar bass.

How do women count time?

Breath space, heart, palm.
What is worse than a woman
in the summer of her life
without loves familiar taste
tongue on flesh?

These stripes no cause célèbre
earned them one fickle hair
at a time. Spastic
breathing space between desire and
hunger wide as a canyon.
This one life. This life
yellow flecked orange
strung around blackness.
I am alive. A survivor of
the wars of men.

My familiar is more than a she-cat
her claws rip through lies men whisper,
leaving exposed, gutted underbellies
of all the women before me.

They arrive eyes wide
bewildered
hosts of many hungers,
in groups or alone.
Children,
elders,
teenagers
asking what happened?
Are they dead?

They arrive in a deluge of water;
coffins sitting on front lawns,
crests of spontaneous lakes.
Newly dead bereft of kin and clan.
Bodhisattva and angels alike
hasten to this quickening.

It’s strange
I know exactly what killed Phyllis Hyman
constant yearning for love,
grounded with tenderness,
real is what she craved.

Bound and caught
like a slave
to a manic nightmare,
she learned to sing her way out of
and through blues.