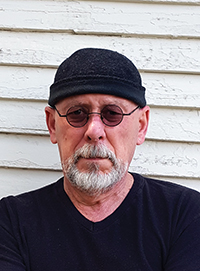 Stefan Lovasik is a U.S. Army combat veteran. During the Vietnam war, he served with Special Operations Forces. His poetry has appeared in American Literary Review, The Main Street Rag, Meat for Tea: the Valley Review and Pedestal among others. His first chapbook, Persona and Shadow (FlutterPress), was published in 2015. He lives in St. Paul, Minnesota.

–In Absolution, Stefan Lovasik speaks in short, often-clipped lines of the disturbed sky of war: …I see through all objects and people/until something dead begins to grow. In these intense and razor-sharp poems, new gods rise up and are destroyed. The god of confessing, the green field of death, the god of whatever remains—as readers, we are complicit in the invocations. In the name of the Allegheny:/river of waste, river of flame: we witness the wars recorded, we breathe the wars of our own undoing. —Jan Beatty, Jackknife: New and Selected Poems, University of Pittsburgh Press, 2017

One is immediately struck by the vivid imagery of the poetry in Stefan Lovasik’s latest book, Absolution. Intrigued in a “can’t look away” way by the raw grit recollection of combat, the first section of the book simply lays the groundwork for more deeply held battles, battles with society, religion, and ultimately battles with his own soul. Each battle, each poem, is a journey shared with the reader; a journey toward absolution. This is a soldier’s tale. This is a true poet’s tale. Absolution is a book that you can’t look away from nor put down—and you won’t want to. –Raymond Hammond, Editor of The New York Quarterly, Author of Poetic Amusement

In his terrific collection Absolution, Stefan Lovasik offers a testament of unflinching immediacy, conflicted sensitivity, and lyric grace—poem after poem wise without presumption, pared down to a breed of silent speech, the stubborn legacy of what must be said and all that never can. Absolution is therefore never absolute. It appears in flashes—a lover’s breath, a dead man’s song, the abject wonder of nature in the gunman’s scope. And no less in the poet’s search for a more redemptive “pantomime,” “exposing the low burn of loss and shame.” A deeply moving and luminous book. —Bruce Bond, author of Blackout Starlight: New & Selected Poems 1997 – 2015

it’s the goddamn noise
that splits you in two

I fight for breath
I fight to recognize myself

as i walked away
i was still singing

It’s sometimes that particular low, gray light of morning
or a brilliant moon that swallows me, lights
the glare of my history; puts it into that dark wish to erase.
Those times when I had one eye on those deaths in
the circle of my scope and one eye on the beautiful green;
the sway of it, the silent track of birds. That fire of days and nights
I had to love to make it through.
So, yes, I want a little shade
to escape into like a cave,
like the dark and opiate jungle rain.

is not a full vein
a clear blood

a few bones
of what possibly was

what was wanted
wished

a catastrophe of fragments
of emotion and image

to remember
our thick pulse

our dense purpose
of how we walk

a murder or magnificence
to happen