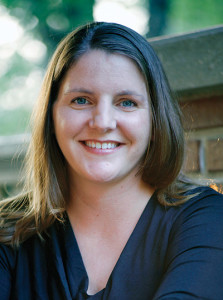 Amy Ash
Amy Ash, a graduate of the MFA program at New Mexico State University, is currently pursuing a PhD in Creative Writing at the University of Kansas, where she teaches poetry and co-edits Beecher’s Magazine. Her poems have been published in various journals, including Lake Effect, Cimarron Review, and Mid-American Review. She is a Pushcart nominee, winner of the 2012 Langston Hughes award for poetry, and a recipient of an Academy of American Poets prize. She lives in Lawrence, KS with her husband, Daniel, and their baby daughter, Ryan.

The Acme Book of Love is not a how-to manual, though there is much one can learn from in here, but more of an atlas. Amy Ash maps our awkward intimacies. Chronicling our daily loves (and hates), Ash’s speaker journeys over that rugged landscape, occasionally stopping for directions and those voices—bartenders, condom instructions, husbands—are sometimes wrong and still, always right. Deceptively plain spoken, these poems acknowledge just how difficult our commitments can be. An excellent introduction to a new and compelling writer.

–Connie Voisine, author of  Rare High Meadow of Which I Might Dream (2008), a Los Angeles Times Book Award finalist.

Despite its title, Amy Ash’s Acme Book of Love is much more a gritty travelogue through love’s landscape than a how-to manual, though readers will find her original wisdom in every gorgeously crafted poem. Her speakers traverse spare and bountiful country in love and out, and sensory detail pulls us along as the moon lights the way, as a “thick tortilla,” a gas station sign, or a sliver of nail. In Ash’s world, love’s country is tactile, sprinkled with beautiful flowers and prickly cacti. Here and there we drop into bars, overhear intimate conversations, share the speakers’ declarations as she calls on an old love to help fill a blank space: “It is the hollowness of the flute / that allows the music to move through…” or swears to another she’ll “always be the one / with duffle bag and callused thumb / hitching along (his) highways.” Amy Ash’s poems are as visually striking as they are touch-able and musical—road-tested and shining. These are the poems I have been longing to read for quite some time.

–Pamela Gemin, author of Another Creature

Advice for the Broken

The wound in the wall is large enough
to stick a hand in. We do not need
to feel the scar to believe

it is there. It smiles at us sideways.
The sole of your sneaker slaps the floor softly
like a timid tap shoe. Startling

requires tip toe. Our world is falling apart,
and it begins with the snag in the armpit
of a shirt. Thin thread unwinds to reveal

a squinted eye in the fabric. We feel ragged
and torn by what we cannot hold together.
We tremble in the wake of everything

slipping away from us at once.
With hooked finger, you call out
to an old lover, bait him

to return to you, but he just swims off
murmuring want. He will not bend
into your embrace like a man

being baptized. Let the water lap against your skin.
For now, at least, our hollowness helps us to float.
It is the hollowness of the flute

that allows the music to move through it.
Those untidy emotions will undoubtedly spill out,
but your sharp cry will be music.

After all, the holes are the most useful parts
of the body. And the most loved.

From Las Cruces to Abilene,
only stucco and yucca,
a crumpled, paper bag landscape.

A sharp cobweb of glass fractures
the clouds. Such a sad, splintered scene.

to his slump-block efficiency apartment,
count the cracks in the concrete for hours

before ringing the bell. Efficiency,
I would tell him, is a combination
of accuracy and timeliness, and he’d

show me the shared pool, the patch of sand
for volleyball. It would be months
before I’d complain

that his mother still hasn’t given me
her recipe for potato salad. Months

before we’d begin to ignore each other
over the Desert Weekly, the phrase

Please pass the butter, having lost
all of its powers of seduction.

The road splits in two like a wishbone
and he turns off to the weigh station,

the thought of him sharp in my throat.

He said come-on,
and we jumped
into his Toyota Tacoma
pick-up that Sunday morning
after all the bars in town closed down. Hunger,
he said, the truck pulling center so that it looked
as if we were unzipping the highway as we drove,
some song of sex and sadness on the radio,
It’s the only thing that keeps us moving.
That was the summer I first moved to Las Cruces,
city of sand and Spanish slang. It was the year
I tried, despite my Ohioness, to make enchiladas
and failed miserably. It was the year I forgot
to watch the meteor shower, and my best friend Jim tried,
three times, to kill himself, before moving away.
It was three a.m. and we drove through Texas Texas Texas
through tumbleweed, through dust storms, rainstorms
we could see coming miles away and towns
I don’t even know the names of. If we keep going, he said,
we could make it all the way to Alabama or Arkansas,
to the beginning of the alphabet where they love
the language so much they hold the words in their mouths
a little longer before letting them go. I wanted so much
to be the word underneath his tongue. I turned
to the map of his bloodshot eyes, but could not
figure out where we were headed from there.
We looked to the thick, tortilla moon folded
above us. We howled, hungered for beauty,
sand stuck in our teeth. And the old Chevy,
which we were following too closely,
with its broken tail-light. The left blinker pulsing
like a heartbeat, cracked and hanging,
barely holding on.