Winner of the 2002 Main Street Rag Poetry Award as chosen by Yusef Komunyakaa.

In his words, “Across the Dark draws the reader into a light that reflects family and the larger world. These imaginative poems resonate with experiment: a gutsy presence that illuminates the modern psyche: “…he paints The Last Supper/ on the shell of an almond–/ each disciple’s body a betrayal.” The betrayals in this voice are believable and curative, and backlit with human warmth.” 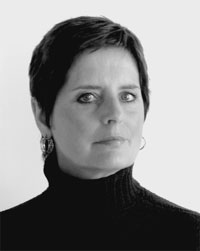 ACROSS THE DARK draws the reader into a light that reflects family and the larger world. These imaginative poems resonate with experiment: a gutsy presence that illuminates the modern psyche: “…he paints The Last Supper/ on the shell of an almond—/ each disciple’s body a betrayal. The betrayals in this voice are believable and curative, and backlit with human warmth. ~Yusef Komunyakaa

Alternating between the lyric compression of a Louise Gluck (“making a likeness of particulars”), and the street-smart iambic narratives of a Philip Levine, with her senses open and her voice alternately open and defended, Pam Bernard’s emotionally controlled yet open poems are edgy and authentic. In her quest for origins, she looks unflinchingly at absent mothering, immersing herself in memory with both compassion and a hunger to move beyond the past. This journey survives “the kingdom of ice,” moving through difficulty to a generous and tough-minded love of that sensuous sliver of the world she’s been given and in turn gives us. I found ACROSS THE DARK a very moving book.” ~Ira Sadoff

This collection is full of threat, calamity, and grace. These poems, short and clean, employ plain diction—no minced words, no inaccessible passages, no hiding behind the spectacular. No linguistic gymnastics here. These are quiet poems often about disastrous events— “No intervals no let up—” (note, not even a comma there to give us a second of reprieve at the end of SILK). They are poems where even hopelessness is rendered delicately—”Wake into your life, where you’ll float/ on your ankle plumes, and dance/with the trickster king, where/ you’ll get to keep nothing—/ not even the shoes on your feet.” —About as dark as you can get, yes, but keep reading, read to the very last word of this book. But try, please, to read this book as it is presented to you, in order, let the poems accumulate one after the other as the poet intended. Give, please, this book that respect, and give yourself, reader, that kind of time with this remarkable collection. ~Martha Rhodes

THE ONE SURE THING

Mother prepared them every night,
mashed or boiled; they were
the quiet one on the plate,
the one sure thing.
Before supper, as she stood
at the sink to scrub and peel,
to watch wind sweep
the back meadow into cowlicks,
she filled our poor, lopsided
kitchen with something
urgent: the fragrance
of that small death in her hands.
I forgave her everything–
the broad column of her body
turned inward, toward
her task–as I leaned hungrily
against her leg, and she passed
down to me, a wedge, raw
and beaded with milk.

UTILITY, A STATE OF GRACE

On the disposable, the forsaken, Jerome
paints with nail polish and white-out,
tapping the excess from his brush

like monks once tapped their quills
on the lip of the ink horn;
Portrait of Charles

on a crushed bottle cap, mortared
with his own clipped toenails
and a dead lover’s ashes.

The body offers its currency–
(He was once a boy hiding
in the laundry basket,

wearing his mother’s slip, curled
as a filigreed illumination, waiting
for his path to be translated–)

The great paw of the virus blinding him,
he fashions a spin board game
with objects of his passion:

mirror, eyeliner, rouge–and names it
what a woman no longer needs.
Queen of the drag queens, Jerome

puts all things to use–utility is a state if grace–
rendering in miniature a cult of relics.
And when his gallery advises him

to work larger, he paints The Last Supper
on the shell of an almond–
each disciple’s body a betrayal.

Sandpipers skitter on their slender reeded legs
along the unstable shoreline; snow
has settled in for the lone haul.
The crossover to the beach road is hard going;
in the wind sweeping across the bay from town
black-winged gulls swoop and dive in decisive arcs.
On a thicket of bayberry, a tatter of kite, its tail
still attached, fitful in the sun’s brief sting–
a child’s small loss. And beyond the thicket,
farther down this barrier island: the trees–
so close now everything falls from them, the world
this side or that of their mottled trunks; above,
a cowl of naked branches, the sky a silver
medallion tossed into the shivering air.

Putting down root here has not been easy.
With the look of not giving up, the scrub pines
take whatever comes. When the sea breaches
the beach road, they spiral out of the reckless waves,
smoothed by the wind’s relentless tongue.
They’ve no work but survival, the fierce
loneliness of sunset’s theater drawn clean and hot
along the edge. If at times I am a useless mark-
a stone stung blind in its frozen socket of sand-
I am today where I ought to be,
or the whole would be diminished–;
and never wanting to lose this place
of mind will not bring it back once it has gone
to wherever these certainties go.