Adapting to the Tides

Until I began editing for her, I had spent only a few minutes with Helen Masson Copeland, at a writer’s event a number of years ago. But I never forgot her, because after discovering that I had young children, she handed me a copy of her book This Snake Is Good to take home to share with them. My children enjoyed her story about a clever twelve-year-old who opposes bias against snakes (and a bully to boot), and I appreciated her generosity toward creatures, children, and writers.

It was a privilege to edit this collection of her stories, rife with fascinating characters. It was an even bigger privilege to come to know Helen through the process. And just how, I wondered, did she become a writer in the first place? “When I was about twelve I learned to type,” she told me. “With my mother’s little typewriter and a proper-fingering chart propped in front of me, I typed letters to friends I met at summer camp and thank you notes to relatives who sent me presents for my birthday and Christmas.”

After four years at Wheaton College, in Norton, Massachusetts, with a major in Zoology and “an interest in writing more than letters to friends,” Helen married a man named Herb Copeland and moved to Charlotte, North Carolina. They had four children who, she says, turned into great grownups. When Helen was thirty, she met Charleen Whisnant, a “remarkably inspiring” teacher of creative writing at Queens Evening College.

“Charlotte’s advice to new writers was: write what you know best and write it truly,” Helen said. She did, and her first publishing success was an article in the July 1961 issue of Redbook entitled “How to Raise Children and Other Odd, Delightful Creatures.” It begins, “If he’s scarcely two and he brings you a bug with a look of purest joy on his face, you have a naturalist in the family. And you have a choice. You can wheel him around by the wrist and have him drop it out the back door or you can stare at it in wonder and find a jar to put it in.”

It was clear to me, from having read This Snake Is Good, what choice Helen made. As I came to know her and her writing, I discovered that she is someone who stares at much more than bugs and snakes in wonder. She’s interested in the full range of human-and animal-experience, and her poems and stories are the jars into which she puts what she has noticed.

She says it took her “many years of struggle” to become an experienced, well published writer, and that along the way, as she wrote and submitted many short stories, she received many rejection slips. “It is persistence we have to develop,” she tells people when they ask her what it takes to be a writer. Helen has been persistent and she may have struggled, but I’m certain that she enjoyed almost every minute of the process. “Revision is fun for me,” she told me. “I love to write.”

That passion for writing and pleasure in revision shows in the short stories in this collection, whose characters, settings, and plots Helen gathered from her life experiences the way she and her children used to gather eggs from ponds and rivers. What followed, as described in “How to Raise Children and Other Odd, Delightful Creatures,” is similar to the experience of many writers: “After we have gathered the eggs we bring them home… There follows a delightful period of suspense-it is always a mystery what will hatch out of the eggs.”

There are mysteries both solved and unsolved in these stories that span from Prague to New Orleans, doctoring to play acting, heroism to scandal. I hope you enjoy reading each of them as much as I have. 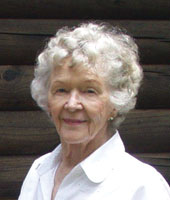 Helen Masson Copeland
These stories were all inspired by the author’s memories. Helen Masson Copeland was born in Rochester, Minnesota, where the Mayo Clinic began. She grew up writing letters for fun and enjoying the freedom of exploring on her bicycle the territory in and around Rochester with friends.

After Wheaton College and jobs at Brown University and the National Institute of Health in the excitement of wartime Washington, D.C., she met Herb Copeland, a handsome fighter pilot, and married him, surrounded by her Rochester family and friends. Together, they had four lovely children, Howard, Marion, Bill, and James. They grew up and the future called. Helen’s love of writing became a career. Some of these stories go back many years, written between the writing of articles, juvenile novels, poems and a nonfiction memoir, Pill Hill, about growing up with the Mayo Clinic. A collection of her poetry, Encounters Along the Trail, was published in 2008.