All That Wasted Fruit / Arminé Iknadossian 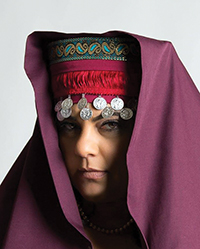 Born in Beirut, Lebanon, Arminé Iknadossian immigrated to the United States in 1978 to escape the civil war. She earned an MFA from Antioch University where she was selected for a fellowship from Summer Poetry in Idyllwild. After teaching English for 20 years, Iknadossian wrote United States of Love & Other Poems (2015). During her tenure as a teacher, The Los Angeles Writing Project awarded Iknadossian a fellowship for their summer residency. In 2017, Red Hen Press selected her to be Writer in the Schools. Iknadossian currently lives close to the sea with Henry the Cat.

Arminé Iknadossian writes as someone who has dipped into the mysteries, the sacred and the profane, and returned with a language charged with blood, wine and fire, flower and flesh. Her connection to ancient mythologies, early knowledge, runs deep and wild through her writings, and this she leverages against the ordinariness of the contemporary world. It makes for an uncommonly striking first book from a gifted poet of our region. ~Suzanne Lummis

When entering Arminé Iknadossian’s poems we hear “warring syllables.” There is hardship and the “fruit” of Iknadossian’s labor resides in liberation “like a woman climbing out of ash and bone.” A voice to be reckoned with, we’re told “Limit me, and all is not well.” This wonderful debut gives us “words to risk everything.” Iknadossian has “learned to pass a song back and forth,” and how fortunate we are to receive each and every one. ~Lory Bedikian, author of The Book of Lamenting, winner of the 2010 Philip Levine Prize for Poetry

Between the idea
And the reality
Between the motion
And the act
Falls the Shadow (T.S. Eliot, The Hollow Men)

A.
We are the hallow women.
We are the stuff men leave behind.
Laden with ill-begotten parcels,
our voices crack the firmament
like spider webs. Mysterious,
we digress from the conversation,
return to the table, eat off a hand-held mirror.

Sit with us, and you will see our shaded
landscape of tapestries and fruit trees.

Our silence has returned as lies,
but our debt is not what we cling to.
Dismember us; we will not tell.
Night is lost, but only as the hallow women.
The stuff men leave behind.

B.
As if I had a seat
in their free kingdom,
in their civil potential.
There, sons and daughters
climb into their fathers’ lap.
There, bees get stuck in sonnets,
and women are busy
winding grandfather clocks.
Near misses, near so many
thinly-veiled discretions.

Limit me, and tear
the kingdom limb from limb.
Limit me, and all is not well.
In between beheaded and dead
No tears –
No tears in their free kingdom.

C.
This is Dad’s land,
badlands cut like diamonds
free from tongues and teeth,
free from the suck of implication,
from the fatherly burden of proof.

I sit like this
in the free kingdom.
I sometimes walk alone at night,
arm in arm with a ghost,
bumping hips with foreign
patterns and mortal coils.

D.
We women.
We see under fear.
I bequeath this ball and chain
to their kingdom
where we grew together
on beaches void of tombs.
A multitude of lonely men
in shirtsleeves.
Trite anomalies.

E.
We will not sing for you.
We will not sing in the morning,
in the evening or in the afternoons.
You ask, “For whom is the kingdom?”
But we ask, “For whom is the conception?”
You have so many in-betweens,
as if we fall for falling’s sake.
But life is not as long as you think,
and this world will not end
in the sense you think it will,
like a starved dog or a mewling infant.
It will end when we say.

The sun has an orgasm across the valley
as Pasadena opens up in front of me,
the Suicide Bridge pushing an arm out
of green sleeves, orange blossoms keening
after a mid-spring heatwave,
the Rose Bowl yawning in a ravine.

It is not enough to love the one you love,
to drive towards the ocean just to fall
into bed with him, then return home
alone, drowsy from sex and no sleep.
You want to keep driving East towards
black rocks and tarantulas of Nevada

or South towards the unilateral mirage of water
where the Salton Sea groans in her deadwood hammock.
On a map, California looks like she’s hugging Nevada,
leaning in for a deep kiss.
She is tentative, he is a sharp-tongued,
diamond-studded menace, kissing her
and at the same time, pushing her into the ocean.

If Joan of Arc Were Still Alive

She would be sitting by the Mediterranean
at sundown, the sky as red as Campari,
singing, or maybe sharpening her cutlery
on a large stone. She would eat black olives
as she watched the burning sea, its lashes
opening and closing at her feet, its stories rising
into evening before pulling away its long skirt.
A hurricane lamp would cast shadows
on the sand with its bright flame. Some nights
she would talk to the flame, ask it probing
questions as if all flames were related.
Other days she would just laugh, shake her head,
whisper the names of her enemies
while collecting bits of sea glass to rub
between her thumb and forefinger, one for each
word God spoke to her. Green for “daughter”,
brown for “pity”, white for “Orleans”.
But most often, she would talk to the sea,
its curling fingers of foam, its fists of water
like a woman climbing out of ash and bone.