All the Heat We Could Carry 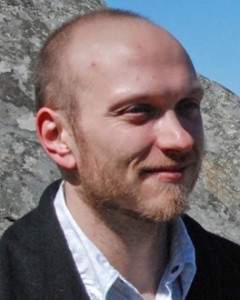 Charlie Bondhus’s previous books include How the Boy Might See It (Pecan Grove Press, 2010), which was a finalist for the 2007 Blue Light Press First Book Award, and two chapbooks, What We Have Learned to Love—which won Brickhouse Books’s 2008-2009 Stonewall Award—and Monsters and Victims (Gothic Press, 2010). His poetry appears in numerous journals, including The Hawai’i Review, The Wisconsin Review, The Alabama Literary Review, The Sierra Nevada Review, Cold Mountain Review, Assaracus, and The Baltimore Review, among others. He holds an MFA in creative writing from Goddard College and a Ph.D. in literature from the University of Massachusetts, Amherst. He teaches at Raritan Valley Community College in New Jersey.

This collection, at turns intimate, at turns troubled by all that war is, gives us what we admire most in the poems that call to us again and again: a complicated look at what we’ve been trained to look away from. These poems enlarge what the reader will understand masculinity can embody, and tell a tale of the way we all resist ruin and come to be shaped by it in inexplicable ways.

Charlie Bondhus gives us a revelation of war’s cost through a series of personae: Soldier, lover, friend, battle-buddy, even mortician. The cost each bears cannot be shown in a body count or Op-Ed. Rather, Bondhus’ poems read like war photographs, snapshots of singular sets of eyes peering off the edge of the page – sometimes at horror, sometimes at the connections that make them human and not instruments of policy. This collection provides an empathetic look at Soldiers and those around them, and never flinches.

Cancellation of the Armed Services’ “Don’t ask, don’t tell” policy allowed gay soldiers to come forward and give an account of their experience. Charlie Bondhus has drawn on available information in order to write revealing and even searing interior monologues from the point of view of gay soldiers as well as their partners. Because of his imaginative sympathies and diligent research, he has managed to produce poems that are fully credible and moving. This collection is likely to change our perspective on the war in Afghanistan just as it gives us a truer sense of the life of American gay men in our time.

The screen door squeaks
and here you are, in shorts and tank,
bearing iced tea, two glasses,
the books we’ve been reading.

No one else on their porch;
it’s hot, and everything sticks
to everything. Still, we resist
spending this golden day—
the clearest of the year—
behind curtains.

On the sidewalk a dog tugs
the woman after him,
while the mop-headed hydrangea
pulls itself out of the soil,
rising like a rebellious slave
beneath the lashing heat.

The neighbors got used to us
a long time ago, but sometimes kids,
the more observant ones, stare.

The hottest on record since 1895,
say the weather people. A sign
of God’s displeasure,
say the evangelicals.

We stay out of matters
pertaining to history and divine discontent,
reading on the porch and pressing glasses
of iced tea to our foreheads.

Handle each piece like a young boy
unpacking a box of seashells, striped rocks, pine cones;
marvel at how something this metal
could be so breakable.
Think about the body.

A kind of archaeology;
the exterior components, when stripped
from the barrel, are delicate
as the dinosaur bones
the boy imagines
from a collection of twigs.

Soak the bolt and its sub parts.
While that’s soaking, run
dry patches through the bore.

The parts lie there,
leaving black stains
on white cloth, the bullet’s
messy signature. The boy’s
fingers are sticky with sap.

Flush the gas tube and blow it out
with compressed air.

He blows sand off a seashell;
the valve catches the air and emits
a low, sorrowful sound,
similar to the whistle of lead.

If the Fire Control Group is excessively dirty,
flush with solvent and blow dry.
Apply lubrication to the hammer, trigger,
and disconnector.

Reassemble and store the weapon.
Think about the box and what it contained.
Remember who you are
and forgive yourself.

Boys will be boys,
I imagine my mother saying
when I was thirteen,
as she washed the sheets
I had dirtied
with the indescribable
wow.

I thought it was something
I’d never get tired of.

But in war it’s as routine
as brushing your teeth,
just a thing we did, once the Surge
left us patrolling empty ridges, and manning
checkpoints no one passed.

Like everyone else I did it
military-style, mental pictures of my lover
or the lance corporal,
an efficient set of strokes,
a pleasant discharge, a few swipes
with a damp cloth, and then
back to work, till one night,

Why did it take eight years
and a war to bring me back
to that perfect satisfaction?

Because sometimes the body matters
more than duty and demerits,
I laid aside my rifle
and leaned back,
thinking of nothing
but myself
and the purple expanse
of desert night.