All This Happened Long Ago – It Happens Now / Iris Tillman 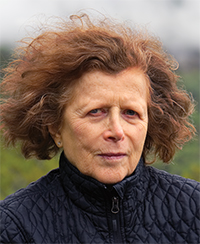 Iris Tillman grew up in Brooklyn, New York and published poems, many years ago, in The Grecourt Review when she was an undergraduate at Smith College. After working as editor-in-chief at university presses in Texas, Georgia, and North Carolina, she became the founding director of Duke’s Center for Documentary Studies. In recent years she returned to writing poetry. Her poems have appeared in Tar River Poetry; The Comstock Review; Women’s Studies: An Interdisciplinary Journal; and Love (Jacar Press); Generations: A Journal of Ideas and Images; drafthorse: a lit journal of work and no work (online); the 2012 Nazim Hikmet Poetry Festival’s Chapbook; and others.

In Iris Tillman’s poems, history is pondered and brought to life against the light of love and death. Readers of All This Happened Long Ago – It Happens Now will succumb to the unsentimental, deeply loving cadences of witness, remembrance, and sense-making. Every stanza is a tribute to and an example of how what’s courageous and good in people lives on, especially in the face of evil. Tillman writes, “There is that problem with history, it is past/and always present, filled with secrets and distortions,” and yet with her tender authority of voice, intelligence, and presence, these poems show us how to conjure opportunities out of such problems, flowers out of arrows, strength out of loss. –Thorpe Moeckel

Iris Tillman concedes her family history will be filled with “secrets and distortions.” Undaunted, she interrogates childhood memories, mines tangible documents for snippets and “truths” that her fearless poetic mind can reinvent: family names in census reports, her grandfather-to-be’s cavalry papers, testimony in Adolf Eichmann’s trial. She travels to towns from which her grandparents fled pogroms and poverty in the early 1900s, hoping to find ways to understand her parents, her own fears as an American Jewish child during World War II, and the silence around her family’s past. The story she constructs is wrenching and provisional. Past and present blur, and “words slip.” Maps tear when she touches them, “their borders mangled limbs.” Her “Heritage Tour” takes her to Treblinka, where she peers into a sprawling pit “excavated by starved fingers / holding spoons.” Surrounded by the horrors of extermination, Tillman listens for “muffled voices,” mourns those who stayed behind, buried in mass graves. –Janice Moore Fuller

Iris Tillman’s All This Happened Long Ago – It Happens Now is a moving meditation over “acres of history,” both personal and public. In poem after gorgeous poem, Tillman skillfully documents tragedy, tradition and the nature of those who suffer to survive against all odds. This is a book about immigrants, the Holocaust and family, rendered in exquisite verse by a writer with enormous skill. “[T]he problem with history,” Tillman writes, is “it is past and always present.” Thanks to Tillman, her history (and ours) doesn’t remain in the “river of forgetfulness.” For all of us, she is brave enough, compassionate enough to look, to remember. –Aaron Smith

What is lost may not be forgotten.
Listen, whispers rise like rumors
from sealed mouths.
Maps of bulldozed lands tear at touch,
their borders mangled limbs.

(Some dug their own graves. Others stood at the edge
and fell.)

The brain lights up, old tales glow like fire.
Watch out, they will sear your skin. More light, a voice cries.

This piece of skull marks an ancestor who walked
not where you walk now, over roots near a park stream.
Life’s easy on this side of family history.

Think of a hand offered.
Think of a boy so badly scalded that he must die
where he played close by a hearth
because an iron pot tumbled its devastation on him
while outside the small house, a hundred yards off,

his mother, Rose, negotiates
with a Gentile officer who has reached for her hand.
She’s brazen, refuses to touch him, tucks hers
into apron pockets and waits.

The miracle is his turning away
from her wide, pretty face and lush braids.

A rough chimney smokes up the sky.
Clouds stiffen into peaks in the cold.
At the door she hesitates as though she knows
she will find her three-year-old, silent and bruised.
The floor steams around him,
boiling water his glistening shroud.

Too imprecise: Say the house was dirty and grew
like a diseased tree in the vicinity of Kamenets Podolski,
a region and town, a name with many variants.

Or it was a village of even more slippery nomenclature
like Novayya Ushitsa. Another prospect, far different
but also nearby, is Minkovitz, possibly mistaken
in passage for Mischowitz – all out of tune, these shtetls,
chords of dissonance on displaced tongues.

Or you may remember the loss without having known
the presence like a story not handed down,
like grandfather Smiel, who became
Sam and disappeared into a single image–
a man with squinting eyes almost
washed out in the sunlight circling his head
like a halo where he sits and smokes
on a wooden chair in a white shirt
and you watch the curves of his eyelids
change into slants so delicate and strong
that their shadows deepen and tell
of horses and Mongols galloping across Russia
leaving their marks in the bodies of women.

The brick fortress of my childhood
still stands, a square white canopy jutting out
over its front doors, flanked by glass
blocks. From inside I watch shadows
striding along the sidewalk, the players
on a stage backlit and broken by time.

Flatbush Avenue, and I am running to keep up
with my mother on her way to the butcher.
Hurry up, she says.
Men pass by silently in fedoras.
Grit rubs against my scuffed shoes.
In time, heavy clouds will let down snow.
I wear a grey coat with a lamb’s fur
collar and a woolen hat with cat’s ears.
Mother knits and sews at night.

Inside our building’s stone corridors
children scramble up and down steep stairs
going nowhere on echoing floors.
An incinerator door opens – a smell,
a song, the worms crawl in
the worms crawl out.
I live somewhere between the top
and bottom and learn to tap dance from Al.
He’s the janitor, who sleeps in the basement,
black as the coal he feeds the furnace –
and the German superintendant, he rules
over the halls of our misbehavior,
shouting, shaking his fist like Hitler.

Mica-flecked streets darken in rain.
Patches of dirt grow in concrete.
The sky shifts colors and drops
into the gardens of Christians
whose roses tempt me to pick their blossoms,
prick my fingers. At the corner
on the way to school, we can’t walk fast
enough to get past the Irish boys yelling
Christ-Killers. I have no answer
until I’m told Jesus was a Jew.

In dark places we hide from sharp eyes,
play statues, and collapsing, fake our dying.
At the kitchen table my sister turns Life’s
pages. I wake at night wet, screaming, hear
loud words in a language I don’t understand.

One Saturday we ride the subway
to Brighton Beach, race with my father
over wet, cold sand, an edge of foaming water
curving toward us. We leave tracks in the mud,
watch the ocean retreat, not knowing –
while the waters rise to wash away our presence –
what is happening on the other side.

Child of the Dniester

I was trying to cross the Dniester . . . I saw hundreds and hundreds of bodies floating in the water. Children mostly.
– Witness Testimony, Session 62, Adolf Eichmann Trial

At a finger’s touch my skin hurt.
One day my bones turned into pearls.
Fire blossomed in my body.

It was the day we marched
to their trucks with promises
of transport to Zion.

When the doors opened
we fell into a forest
and stumbled toward Paradise.

It was good to fall into the Dniester.
In the river of forgetfulness
my shadow disappeared with the wind.