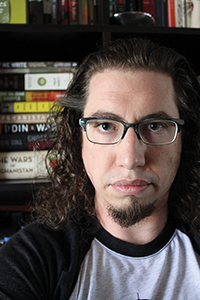 Colin D. Halloran is a US Army veteran who documented his experiences in Afghanistan in his memoir-in-verse Shortly Thereafter, which won the 2012 Main Street Rag Poetry Book Award. He has also written the poetry collection Icarian Flux, along with many poems, essays, and short stories which have been translated and published internationally in print and online. When not writing, Halloran leads workshops that seek to promote personal and international healing and reconciliation through writing and the arts. He lives in Wilmington, NC.

Colin Halloran’s American Etiquette is an extraordinarily rich collection. These poems are politically engaged, vulnerably intimate, and deeply humane. I hope they will be read widely. ~Kevin Powers

Colin D. Halloran’s poems are full of images, some beautiful and full of hope, some tragic and full of despair – all true to life – and each poem will refresh your memories of where our wars have taken us so far, both abroad and at home. American Etiquette is a precious book, cadenced and vibrant with feeling. The words leap off the pages, and because of their incredible sensory detail, each poem will make you cry and rejoice at the same time. ~Qais Akbar Omar, author of A Fort of Nine Towers

I wanted to write a poem about
Ukraine—
and Russia—
but I can’t pronounce Debaltseve.

Our national tongue
forgot these Russian names
we once pronounced so richly,
replaced them with Jalalabads, Jisr al-Sughurs,
allahuakbars, and Deir ez-Zors.

Our national memory
forgot what happens
when cease-fires cease to be,
what separates cease and seize.

We can pronounce Dubrovnik,
medieval city by the sea,
where fantasy TV is filmed.
At least we know its walls
its waves,
if not its name.

But Debaltseve—
where decoy fires left lit in fields
covered troop withdrawals
beneath the arcing lights—enemy mortars
imitating pen strokes
across the pages of cease-fires
signed just days before—
that, we do not know,
we cannot say.

So, I cannot write a poem
about Ukraine
and Russia
and a town whose name
I cannot say.

I can only search for truth
in filtered facts
that alter what those
soldiers must have seen.

It’s been two days
since Dhaka saw its pain

buried in the Baghdad rubble
that fell just moments later.
Or at least that’s how it seemed.

And it’s been two days
my text has gone unanswered.

Inshallah you just hate me
as exes tend to do.
.
But maybe you
were home to visit family.

eyes going wide as those well-spoken men
who could have been your classmates
drew guns to make their true intentions known.

I comb reports
teasing every detail that I can
seeking signs that you weren’t there.

But it’s been two days.

And for once I hope
my number’s blocked

that the hollow check that means
unread
will not become your epitaph.

As hospital beds yield to coffins
to join the scattered remains,
we have nothing left to give.

The early count of eighty-three
sapped out all our horror

steeling it as we learned
of families
mothers
children
friends

shopping at a mall not different
from the ones where we loitered
our way through high school years.

We all agree:
it’s awful.

But debris is cleared,
and dogs brought in
to sniff and paw,
some morbid hope
the humans couldn’t sense.

And what response is left to us
as dogs do their jobs
as doctors fail
and death tolls rise?

How can we muster more sorrow
more rage
more… anything.

a silence coming
not from reverence
but the numbing salve of distance.