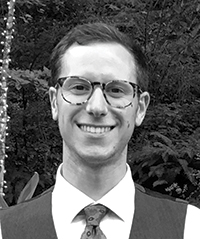 Jake Young is a Certified Specialist of Wine with the Society of Wine Educators. He received his MFA from North Carolina State University, and he is completing his PhD in English Literature with an emphasis in creative writing at the University of Missouri–Columbia. He is poetry editor for the Chicago Quarterly Review.

American Oak announces a poet who has found his own way—toward clarity, toward a voice as grounded yet penetrating as Li Po’s, whose work is a subtle but luminous influence here. Jake Young pays attention to the smallest details in the world which he sets in the right order to produce poems that make meaning, reveal the earth, and ourselves, and brilliantly cherish us both. –Christopher Buckley

These are poems of the earth, its geology and landscape, the fruit of its vines. The wine making motif runs throughout, deliberate and purposeful, all embracing. Young’s spare and attentive lines take for their model the great nature poets of history: Wordsworth and Snyder, Basho, Thoreau. I admire their clear language and patient sensuality. This is a fine debut collection. –Joseph Millar

In American Oak Jake Young writes of spirits, longing, nature, and the everyday wonders we could easily overlook. These poems of the senses carry the aromas of salt and olives, wine barrels and pine, poems that rustle with a warm wind and invite us to be present in a world passing us by. —Dorianne Laux

So much goes into a beautiful wine.
All summer I work in the cellar
with Carlos, a short,
barrel-chested Salvadoran
with a gold crown on his right canine,
and scars on his knuckles
from when he worked as a mason.
Pointing to a web of scars
across three fingers,
Carlos tells me about
his old job cutting trees.
Each day he would fell one,
cut it into four pieces,
and carry the sections
on his shoulder, one foot
in front of the other,
over the mountain to the mill.
For the first time in years,
I’m thinking in Spanish.
I know this is not my doing.
Like wine, I’ve absorbed
what’s around me.
The barrel room has five strains
of unknown yeast,
ambient in the cellar,
single-celled fungi,
microscopic mushrooms
in the air. No one’s sure
where they come from.

I follow the winemaker into his vineyard
to help him gather grapes
from each section, then measure
the sugar and acid
in the fruit he will harvest
any day now. After work,
I drive the coast highway,
where immigrants from Mexico
and El Salvador harvest
Brussels sprouts, leaving
a trail of stalks behind them
as they traverse the rows.
The fields stretch from the road
to the edge of the cliffs
that drop into the Pacific.
On days like this I glean
whatever I can from the world,
a thought, a scene, a scent.
Whitecaps dot the surface of the water,
teal today beneath a clear sky.
The herb garden beside
the entrance to Wilder Ranch
is also ready for harvest,
and the fragrance of rosemary
carries into the car on a wind
that sways the row of cypress
bordering the farm
at the edge of town.

At the block party,
I ask Mark and Kelly
about their daughter
Anjalena. She’s fifteen
now, the age I was
when Mark and Kelly
gave me my first job
at their bakery, where
I learned to take orders,
to deflect a threat,
and to swear in Spanish.
While I wiped down
the tables outside,
I would talk about women
with Prince, the black
Vietnam vet who ran
a flower, candle
and soap shop next door,
always on the lookout
for hummingbirds
that sometimes dipped
and waved about
Prince’s flowers.
A Green Violetear
hums overhead,
the metallic blue-
green shimmer of wings
rising with the rattle
of our wine glasses,
drifting with the scent
of asada and pastor
barbequed on a bed
of mesquite. Mark
and Kelly’s first child Tobin
died at the age of six.
At his funeral,
our preschool teacher
told me she had seen
a hummingbird the day
Tobin died, and showed me
a tattoo of one in fresh,
shimmering ink on her ankle.
I was too young to understand
what grief looked like.
She told me she knew
that Tobin was okay,
and for a moment,
I thought she was saying
he had been reborn
as a bird, that I might
find him again,
iridescent, alive
in the body of another.