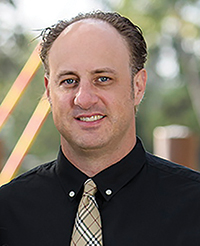 Brad Johnson was born in Ann Arbor, MI and raised outside Baltimore, MD. He earned his MFA from the University of Miami and is currently an associate professor at Palm Beach State College in Boca Raton, FL, where he lives with his wife, children and dog. His full-length poetry collection The Happiness Theory (Main Street, 2013) is available at http://mainstreetrag.com/bookstore/product-tag/brad-johnson/. Work of his has appeared in The Antioch Review, Hayden’s Ferry Review, J Journal, Meridian, Poet Lore, Salamander, Southern Indiana Review, Tar River Poetry and others.

Another Wild Animal is another wild animal from Brad Johnson, another collection of poems with the savage, unbridled irony we’ve come to expect from one of America’s rising comic poets. But, don’t be mislead by the laughter that comes with these poems, for they also come with meat on the bone. While we laugh, Johnson manages to make strong philosophical statements about the inter connectedness of all things, the flux of time and space, and the duality of man. That duality focuses on family. Another Wild Animal unearths the dark side of The Family Circus. Set for the most part in the Midwest, Johnson’s oeuvre, many of these poems hone in on the humorous relationship between a father and daughter. Johnson’s parenting issues address matters such as the daughter wanting to eat her baby brother’s face because he is so cute; however, a few lines later Johnson makes a poignant statement about parenting and mortality. The latest chapbook by Brad Johnson confirms his place as an American comic voice worth listening to.

No one wants to read a straight
man’s writing on women my second
wave feminist mother tells me.
No matter the intent she says it all
reads like misogyny yet what can
one do but question the significance
of the vagina when living with wife
and daughter, when both father
and brother are practicing OBGYNs?

The mohel held my hand that held
the blade that circumcised my son
and now I’m learning things I didn’t
know about the penis: foreskin
treatment, scrotum care, the need
to cover when changing diapers
to prevent urine spraying everywhere.

In the backyard my daughter waters
her strawberries with my mother
but when she drops the garden hose
it kicks in squirts across the grass,
ducking from their grabbing hands
like some wild animal showing
its teeth, refusing domestication.

On Having Two Gynecologists in the Family

It’s great to have last-minute prescriptions
filled without appointment, three month’s worth
of NuvaRing samples arrive in the mail,
a calm voice at four am tell you after
your water breaks to Relax. Have a glass
of wine. Take a hot bath. But at one point,
you start receiving angry calls from parents
of your daughter’s friends who say
your daughter replied to their daughter’s
claim that they came from their mother’s
belly with: I came from my mom’s vagina.
She’s four. The phone keeps ringing.
My father says to talk to a pediatrician.
My brother suggests trying private school.

The geometry of guilt is impossible to establish
and each New Year’s Eve, people are killed, struck
down by handgun fire, ammunition shot into the air
in celebration of another year gone, another year
beginning. These shots are more than just bangs.
The bullets eventually arch through the atmosphere
and return to earth, gain momentum and travel
through windshields, billboards, balcony gardens,
skulls. Those struck drop, deflating like inflatable dolls dancing
outside car dealerships until they’re unplugged and empty
with a shrug. Death can be delivered from outside
the city limits, from the apartment building across the street
or from three counties over. On New Year’s it’s hard to tell
who passed out in the hallway, who fell over the loveseat,
who suffered cardiac arrest before the ball dropped
and who was touched by God or the Fates or the Furies
until morning. Even then, no one wakes to watch
the sun’s early shapes constructed upon the walls or read
yesterday’s obituaries in today’s paper or consider
how unlikely we are to be born at all, much less in a society that uses
forks, laces shoes, showers daily, computerizes dating,
freezes sperm. It’s statistically improbable that we’ll live
to next year. Just as improbable is the likelihood of us touching
as the stars wink themselves to death; of your sleeping breath washing
over my chin as the moon, curved like a clipped nail, fades
into the sky’s whitening carpet; of us waking together
to weigh breakfast options in a city sleeping late.