At the Grace Cafe / Richard Widerkehr

At the Grace Cafe 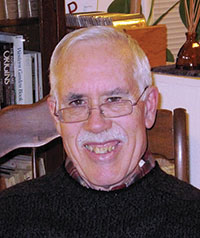 Richard Widerkehr’s work has appeared in Rattle, Writer’s Almanac, Verse Daily, Atlanta Review, and others. He earned his M.A. from Columbia University, won two Hopwood first prizes for poetry at the University of Michigan and first prize for short story at the Pacific Northwest Writers Conference. His books and chapbooks include In The Presence Of Absence (MoonPath Press), The Way Home (Plain View Press), Her Story Of Fire (Egress Studio Press), and Sedimental Journey (Tarragon Books). He’s worked as a case manager with the mentally ill and, later on, taught writing at the Port Townsend Writers Conference.

These poems take us to a place of grace, where we can step into the stories of mental patients, conveyed with respect and understanding, or journey to childhood memories, thoughts on being Jewish or simply being human. Most tender are the poems addressed to Chloe, a sister struggling with mental illness, that bring her vision of the world to us. Reading these, we may feel with the poet, “For a few moments/we almost lack nothing.” ~Barbara Bloom, author of Pulling Down the Heavens

Richard Widerkehr’s .At the Grace Café, ranges from brief, almost prayerful lyrics to longer narratives which explore, among other subjects, the devastating effects of mental illness on the family. Although these poems are often heartbreaking, they are always alert to grace, as when, taking a shower, he realizes that “this is mercy”: the “clasp” of water and the knowledge that his sister, whose presence haunts these pages, is temporarily safe. These poems themselves are blessings. ~Patricia Hooper

More than a collection of poems, At the Grace Cafe is a mysterious narrative of personal psyche and family memory. Stretching from a Mexican resort through the horrors of the Second World War to the corridors of a mental institution, these poems shine with the restorative strength of love. Ghosts are everywhere, speaking through grass and trees, while dreams and songs call out to be heard. If we listen, we can hear the truth.  ~Sheila Nickerson, Disappearance: a Map
Blackbird Flying: a Memoir

In Times Square, I gave this young kiddo
seventeen dollars, almost all my cash.
He said he needed cab-fare so he could get
an operation in New Jersey on his testicles.

Near Honolulu I soared on the back
of a dolphin over blue-green water,
the sharp hill of Koko Head,
the round haunch of Hanauma.

Sometimes, when I work on this unit,
the charge nurse has me sing songs to calm
things down. Tonight, I sang Here Comes
The Sun for Carlos in four-point restraints.

My sister walks six miles barefoot
to her bank. Chloe doesn’t take meds,
can’t be detained, no danger to self or others.
I haven’t sung for her in forty years.

Now, since our father died, she thinks
her phone’s bugged. Chloe has a roof,
enough food to eat, we think. She looks
and smells like a street person.

If anyone asks for seventeen bucks cab-fare,
so he can get an operation on his balls,
I’d say, Here’s three bucks for the train.
Is love stronger than death?

Tell me the truth, tell me a lie.

Sick of the news, I take a pruning saw
and cut the deadfall alder trees that came
down in last month’s crazy silver thaw—
every thirty seconds a crash and clatter
as the wind and freezing rain became
too much and something snapped. Back then
the war hadn’t started. Unreal, we said, this patter
like gunfire. Cold, we lit candles, built fires
in the fireplace, till the power came back on.
But we were stupid, for the stupid wires
weren’t peace. On the TV, gunsights lock on.
Something, a tall flower, leans higher and higher.
The screen freezes. I push and pull the saw,
stack logs, haul branches, then go back for more.

They shouldn’t call an ice storm silver thaw.
It sounds so soft, pure as the driven…. Down
the land a pretty web is spun—before
we know it, trees all cracking. Linda, three
years we’ve lived here peaceably, as the sound
of our fat cat Rufus snoring, the door
that opened or didn’t, were things we
sometimes half-heard. Now on the TV screen,
dust rises from some rubble; there’s the face
of a woman weeping. And we’ve just seen
it? Christ, if our country isn’t a race
of angels—bend, kneel, blow to smithereens
the other angels, evil as we saw.
We’ll call it Operation Silver Thaw.

There on the screen, that’s him, the enemy,
his warehouse filled with–is it chemicals?
The announcer doesn’t say. We see
the crosshairs zoom in on a gate, the outline
of a door. It’s open. From the left–wheels,
a truck. A man runs up. Oh-oh, guess he
shouldn’t have, the announcer says, and hell,
we shouldn’t laugh. Fixed in the lines
of missile sights, the door goes up in flames.
Just like a video game, you say. We watch
the replay, see the close-up, take in the same
scene over and over. Numbly, we touch
each other, draw apart. Death from afar
is death, and I forget what it’s all for.

One Night, One Morning

One night someone stood under a tin awning
on a loading dock, waiting for rain to stop.

On another coast, a bald eagle on the naked branch
of a stunted Douglas fir tears at its breakfast.

As I write this at Fort Worden in a beige living room
whose tan-and-red carpet has gold swirls,

I think of you and my ’77 Chevy Vega,
rust spots near the taillights, one dented fender,

an Indian car, my Lummi student called it.
At first, I thought the eagle was a raven,

lugging something white over the beach.
I don’t know if you’ve come home from work,

if you’re sitting on our green couch knitting,
fending off Gracie as her claws snarl

your crimson yarn. Maybe, you say, Gracie, no.
You’re not helping, your voice

rising like the sail of the windsurfer
I saw this morning, how he leaned and swung

like a keel under his yellow crescent. The love
and irritation in your voice as you tell Gracie No.

I never saw you loved me, till you paced
back and forth, yelled, I am not a dud.

Back then I didn’t think a woman loved me
unless she clawed my back and screamed,

and even then I wasn’t sure. Didn’t know
the difference between dust and summer,

rain and the smell of rain, I would come to write.
Hadn’t told you about the loading dock

where I prayed, Please take my life,
as if I were a piece of paper.

I’m not waiting for rain or my Vega
to get creamed in a demolition derby,

get rebuilt as a stock car with a Corvette engine
and run 250 thousand miles.

Something keeps burning, a fuse on a runway,
two coastlines that never meet,

an eagle tearing at the privacy of breakfast.
In sunlight, I write this for you.