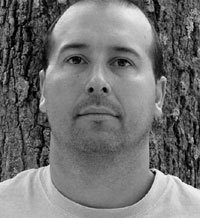 Dan Memmolo’s poems have appeared in a number of literary journals, including Another Chicago Magazine, New York Quarterly, Southern Poetry Review and Sycamore Review. He has received degrees from Florida State University and the University of Rhode Island, as well as an MFA in Creative Writing from Virginia Commonwealth University. He lives in Rhode Island with his wife and son.

Dan Memmolo is equal parts wiseacre and soothsayer, part gyrating Elvis impersonator, part tender magician extracting bouquets from a depthless hat. I’ve been a fan of his work for years. Beat Surrender sizzles with energy, humor, and insight, with poems I wish I’d written. How can “a world so wrong…feel so right”? Listen carefully. This highwire of a chapbook explains it all.

The Places in Which We Begin

“Town or poem, I don’t care how it looks.”
Richard Hugo, “White Center”

North on 319 from Tallahassee
and in no hurry. 84 East—
Thomasville, Boston, Dixie,

a median lined with dogwoods,
branches so heavy with life, some blossoms
hang suspended in the air, attached

to the sky, hardly moving.
This is Quitman, Georgia. Notice the sun,
how it hugs the children playing

in front of Delia’s Kitchen, how it
savors the words scrawled
on the sign leaning against the store—

Boiled Peanuts by the Bag, Pecan Rolls:
Make You Slap Your Mama.
I am with the woman who will

become my wife, but on this day
we watch the roadside, having little interest
in the future. On this day, our foresight

is limited to a craving for peaches,
which we will buy on the side
of the road, off the back of a truck,

from a man shaped like a sackful
of doorknobs. His face the face
of the fruit he will rub in his large hands

and drop into a paper bag—
colored red in all the right places,
coated with a dust so fine.

Barechested and Full of Vigor

I’ve been writing poems in my underwear as of late—
the white kind with the blue and yellow stripes
along the waistband—as this summer
lights trees on fire and blows its hot breath
in through the windows, evoking
an old girlfriend of mine, who was never big

on talking. And when I stand from the chair
and peel my thighs from the cushion’s red vinyl
and walk to the bookshelf across the room,
I wonder, as I drag my finger along the slim, rigid spines,
if any of these poets, whose words I can no longer live by,
had written any of these poems in their undies:

Keats by candlelight, let’s say, in a pair of long ones
that fall just above the knee, barechested and full of vigor,
the illness that will kill him not yet traversing his veins.
He closes Chapman’s Homer, rests it on the edge
of the desk, and takes his negative capability to a new,
albeit partially naked, extreme. Or Rilke, maybe,

watching the lone window of his tiny apartment,
a Paris frost collecting on its panes, as he contemplates
Apollo’s torso (that mutilated piece of Greek sculpture),
its inner brilliance, his own death. The fly of his checked boxers
open enough to allow a small clump of his pubics
the pleasure of basking in the moon’s hard glow, the night

so hollow and cold. Or down in Chile, the leaves of palms
hanging limp in surrender to the heat, I can see Neruda,
oblivious to the sun’s torment, prancing around his home
at Isla Negra in a pair of shocking blue jockeys,
the elastic waist slowly slackening. He reads a recent draft
of one of his odes. He sings it loud, testing his music,

hand waving as if holding a baton; those short, little lines
like heartbeats. It’s the summer he croons for, that “red violin”
whose song has surrounded me now in this room,
where the shelves have gone ablaze and the poems
have begun to burn, slowly at first and then with great gusts
of flame, each word exploding like dynamite.

the fan.” But the farts
that I grew up with on Boston’s
South Shore, those little
presences that hung in the air
like catchy tunes, we
proudly called air biscuits.
And they were not laid
or cut, ripped or eked,
but were gently floated
from the backsides
of blue jeans, corduroys,
the pleated skirts
of Catholic girls. But it

was Sully’s butt that could
sing. The four of us—
add Sanda and Rothman—
strolling down North Main
after a large pepperoni
at Zack’s, Sully would do
that Chaplinesque walk
of his, his body quivering
like a bowstring, filling
the air with music
and that scent we had
grown used to. Maybe
that was the maestro

that held our friendships
together, a baton waving
entity that propelled us
into the air to slap
those punctuating high-fives
of unity. For we were
inseparable for a time,
a four-part harmony
that turned the heads
of song birds and others,
only to be parted
by a future out of tune.
It is much later

than I think, sitting
here trying to culture
myself, listening to classical
on the disc player.
I try to separate each
instrument from the composition,
hearing them alone, without
accompaniment, sounding almost
lost. It is Ravel’s “Bolero”
and if I listen to it
as a whole, a complete
grouping of disparate elements,
I can hear it piping out

of Sully’s Toughskins,
the brushes slapping
the snare, the crashing
cymbals, even the oboe that
remains constant, floating
throughout the piece.