The Advance Sale Discount has expired. For those who prefer to pay by check, the price is now $19/book (which includes shipping + applicable sales tax) and should be sent to: Main Street Rag, PO BOX 690100, Charlotte, NC 28227-7001. 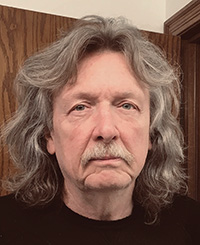 Roy Bentley, a finalist for the Miller Williams prize for Walking with Eve in the Loved City, has published 8 books; including American Loneliness from Lost Horse Press, and recently a new & selected collection entitled My Mother’s Red Ford. He is the recipient of a Creative Writing Fellowship from the NEA, and fellowships from the Florida Division of Cultural Affairs and Ohio Arts Council. Poems have appeared in North American Review, The Southern Review, Crazyhorse, and Shenandoah among others. Hillbilly Guilt, a new book, won the 2019 Hidden River Arts / Willow Run Poetry Book Award in 2019.

Roy Bentley’s deeply personal narratives of love, death, betrayal, and regret become universal. What sets them apart, however, are the insights his narrator provides¬—insights we’ve never been more hungry for—generously apportioned in every poem. At the end of the day, Bentley’s narrator is profoundly human; consequently, we are left feeling far more than gratitude “for those many moments of wonder / and acceptance that sanction you being yourself and just living…”

Roy Bentley’s poems tell stories that are rich in people, events, insights, and beauty. He takes everyday moments, such as the closing of a drive-in, or conversations in a bar, and turns them into sacred things, which, let’s face it, all memories are. “But what happened in those days in Ohio was more than metaphor,” he writes. In the process he crafts the kind of truths that you wish you’d thought of yourself.   ~Grant Clauser

At 30, my father drove a Cadillac in all weather.
Maple seeds spun down onto the wax job of a hood,
a black hood, black his preferred color in automobiles.
He owned two Cadillacs. His and hers. Both of which
he forfeited divorcing my mother, who saw not a cent.
When the divorce was final, he remarried. Had a child
with another woman. Said that wasn’t what he wanted,
another family. Some weekends, he came around. We’d
go on walks. I remember walking by the river in Dayton.
He said, You know five rivers converge here and named
four out of five by a botanical gardens gemmy with rain.
Then he said, That’s the Great Miami and looked off in
the direction of an orchard, the bright and unforgettable
scent of the ripe fruit the definition of Beautiful Plenty.
On a bank, a rotted boat sat. Someone said every boat,
new or old, is looking for a place to sink. And he said
something similar, my father, no fan of boats. Maybe
he supposed the one we saw was like their marriage:
as gone to rot and about useless as the oars to row it.
My parents were poor kids from eastern Kentucky
who spoke a language of want I wasn’t fluent in.
We never saw plenty again, thanks to him. It was
around that time my mother got a job in a factory.
Which must have pissed her off. Because she got
tough with the world and with herself. Tough and
satisfied because her face and Ava Gardner outline
glistened brighter than anyone with a beating heart
when she stood anywhere near that next car he kept
so immaculate you could see a version of yourself in
every shiny, midnight-black inch of fender and hood.
And when they got remarried, there was the matter
of the kid he’d had. Which she made him support,
though she wrote out the monthly checks herself
and stamped and mailed them. Just to be sure.

And Blood on the Tracks in the Tape Player

Recall any moonlit part of an hour by a road’s edge:
the snow on the limbs of scrub pine, the silent falling
through night air beside miles of two-lane blacktop.

There is no equivalent to wanting someone that much.
If you think about it, the cop who stood in deep snow
to tap at the window was anything but rude, though

he did flashlight you. Turns out, it takes a uniform
to bring Original Sin into a space scented with sex.
And he did turn away as you wriggled into clothes.

In those days, the mat of beer cans was nothing.
And you got a warning and felt lucky to be young
in Ohio where the police knew your name, hers,

and followed in a cruiser to where you dropped her,
your Firebird or Ford Torino idling for a long kiss
in the driveway of a house with the porchlight on.

A harvest moon hovers like a tractor’s headlight
or the pewter-colored, Frisbee-like flying saucers
in the sci-fi films where the Earth is up for grabs

and the jackbooted extraterrestrials cull conquest
at every turn. Movie light falls onto the sandbox
and playground, ponytailed sisters on the swings

in Star Wars feety pajamas. In a convertible, top
down, you hear the hullabaloo at a funeral home,
a wailing for the war dead as a light turns green

and a muscle car roars. Across gravel, a space
over, in the last drive-in in Newark, Ohio, a kid
wets his finger. Sticks it in the ear of his sister.

to hear Tommy Kirk ask, Can I keep him?
Maybe you are old enough to ask for sex
or refuse it with some minor key moaning.

Eventually, Old Yeller will need shooting.
And when it comes, the din of American
unhappiness, it swivels heads in starlight

by the signage with a fortuitous dark bulb
to collapse spelling locals know by heart
in the last September you may ever love.

A Box of Stars, a Dog Run at Daybreak,
a Siege of Night Herons

An inscrutable gift to get just before Christmas,
considering my relative ignorance of astronomy.
The cardbacks were inaccurate. Far-fetched.
And not one of the constellation’s punchings
matched the right ascension and declination
or lined up. Not even Orion with Betelgeuse.
Ursa Major was “an astronomical bestiary.”
I had to look up the word bestiary to read

the definition aloud so that we, you and I,
could agree to disagree about the Universe
being a petting zoo. The problem with gifts
isn’t the nearly unpardonable Poor Choice
but that we forget the magnitude of effort.
I was ready to learn what spins overhead.
I read: Cassiopeia is seven stars of suffering
because she sometimes hangs upside down.

Next morning I was bagging night-leavings
in a run facing into Florida firstlight made
famous on postcards. I’d done this before
but stepped in giblet-ooze and excrement.
Corn nuggets glowed on a sandal sole.
In oleander, a cardinal and a crow sang
beneath a ceiling of leaves. The cardinal
startled and flew. Red and small and alive,

it cleared the oleander. Above a fountain
at dawn near a dog run by tamarind blooms.
That evening we were on the porch whispering.
A heron possesses a startle response like nothing
if not falling in love against your better judgment.
Whether the stars and these nervous night birds
define restless wandering—errance—the light,
like some remarkable door in the air, closed.