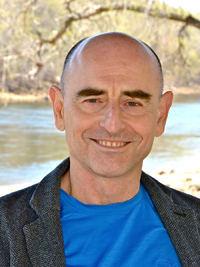 John Krumberger works as a psychologist in private practice in St. Paul MN and lives with his wife in Minneapolis. He has previously published a volume of poems entitled The Language of Rain and Wind (Backwaters Press in 2008), and a chapbook, In a Jar Somewhere (Black Dirt Press, 1999).

John Krumberger’s Midwest is an everywhere that is once a place where “irony has not been discovered,/and beauty is a house that can be lived in.”  The poems are painterly and read like ritual acts of immersion in light and the currents of a life.  I call your attention especially to the gorgeous last section, “The Great Secret” which leaves me, as good poems do, in an attentive silence. –Bruce Smith

In my home country in March,
snow mounds are burning
into fog;

particles of ash
filling our lungs with sorrow
until the rivers

back to themselves,
no longer tall girls
with shoulders hunched together.

Soon the dead will vacate the sky.
The ground thawed and scoured,
the dirt resumes its singing.

FIRST DAY AT THE NURSING HOME

So this is how it is:
life shrunk down,
body an empty boxcar
waiting now for snowdrifts.

Her mind returned after days of raving.
she has asked that I wheel her to the chapel
and bends stiff as a branch,
almost prostrate in her chair,
bowed before the crucifix.

Lake Michigan looms outside
with its grim cobalt face.
I think of Keats completely spent
resting in Severn’s arms,
the work of soul making finished,
“the world of pains” almost a blur,
almost a dream.

Now I think I understand young John Keats
who dreamt of being a saint
but no longer believed in God,

how he was intoxicated with beauty and with death,
how he sometimes would mistake one for the other,
finding a music too entrancing for the young to bear.

Now I understand that art and love are ways to slow down time.
I listen to the Chopin nocturne this season when mortality is on display
like a mural painted on a sagging barn;

or I bicycle the bluffs of the Welch Village Road
whose maples on fire with their reds and golds
resemble a church’s stained glass windows.

Now I understand the sun’s embers on the river,
and the river sound slowing down.
I can feel the earth thinking. I know it is looking back,

because I am a man and a Scorpio and a lover who loves shyly, but deeply;
because the sky is a cold river;
because of loneliness and a strange happiness.