Beneath the Bamboo Sky 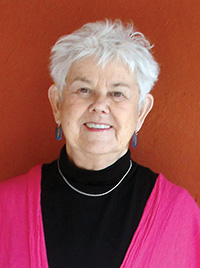 Irene Blair Honeycutt, born in Jacksonville, FL, is the author of three poetry books. The first, It Comes as a Dark Surprise (1992), won the New South Poetry Book Series Regional Contest. The third, Before the Light Changes (2008), was a finalist for the Brockman-Campbell Book Award.   Other awards for her writing and advocacy of writers include a NC Arts Council Scholarship, a Creative Fellowship from the Charlotte Arts and Science Council, and a Best of Charlotte Award from Creative Loafing for Best Contribution to the Improvement of Charlotte’s Literary Climate.  She founded and directed Central Piedmont Community College’s annual Spring Literary Festival in Charlotte, NC, which expanded into Sensoria.  At the college, she received the Award for Excellence in Teaching.  Upon her retirement, the college established the Irene Blair Honeycutt Distinguished Lectureship and the Irene Blair Honeycutt Lifetime Achievement Award.  Her work has appeared in numerous publications, including Nimrod International Journal, Southern Poetry Review, The Southern Poetry Anthology and Virginia Quarterly Review.  She lives in Indian Trail, NC

Among the things poetry can do is to help us celebrate, help us mourn. Irene Honeycutt’s deeply felt new collection does both. These poems range from the prose-like to the formal, from details of the life and death of her three brothers to small lyric moments that console her for their loss. And at least “for a while the world feels at rest even though it isn’t.” —Linda Pastan

“And I will remember,” Irene Blair Honeycutt vows in this heartfelt book of staggering losses.  In these poems and prose pieces, she bravely enters the domain of the dying and comes back with a touching testimony of loss, grief, sustenance, and consolation. —Edward Hirsch
As a medical oncologist, I have been able to share in Irene Honeycutt’s journey. Little did I know that it would contain unexpected segues with her health, her life and the health and lives of those close to her. She has handled with courage and perseverance the baggage she has had to haul around—most of it, not a planned carry-on. We have shed tears and have laughed ourselves to tears. I hope the wisdom found in this book will help readers with their own journeys. —Daniel R. Carrizosa, MD, MS

Local Praise for Beneath the Bamboo Sky

I so love Irene’s diagrammed poem, “When Sorrows Come.” And to represent it visually is powerful. The impulse she describes is elementally human/even animal. And the diagram is elemental–in a different way, of course, but pulling us back to early lessons, to the basics. The echoes are beautiful. The lines are a scaffold.  And they create a shape that one could imagine entering (a geometric cave, almost). ~Amy Bagwell, poet, artist, educator

Irene’s lyrical poems have an ethereal quality mimetic of searching itself. I want to find myself among the Indian Pipes.  And “Oh, to be proud in your presence again” brought me to tears.  So poignant.  ~Kathie Collins, poet & co-founder of Charlotte Lit: Center for Literary Arts

The metaphor of waves for grief is universal and appears so often in different ways from sufferers of deep loss.  I described it that way in letters and in my journals. Irene has given waves of grief new life and new images and fresh words.  ~Mary Allred Crews, Beyond High Windows

In “Words to Wang Wei on the First Day of Autumn,” Irene Honeycutt strikes chords that resonate with sympathy and power.  Allusions over oceans and eons build like Wordsworth brooding with Milton over the abyss of creation.  Our clouds and the clouds over Wheel-Rim River and the Whole-South Mountains are free. When Honeycutt’s “geese fly over the pond,” Wang Wei’s “birds in flight go on leaving and leaving.”  Evocative of the Tao, “what dreams can paint” becomes a cloudburst not far behind Wang’s brush.    ~Gill Holland, poet & Professor Emeritus of English, Davidson College

“Something Came Knocking” is a stunning pantoum—one of the best I’ve ever read and now my favorite.  Irene makes good use of grief, present and past, and I feel the accumulation in this pantoum.    ~Ione O’Hara, A Passing Certainty

We played at Westbrook Park, my brothers and I,
scooping minnows from the creek

By next morning, the white bread crumbs had soured.
Bloated, the minnows floated upside down.

The stench we hurled into the weeds
wrinkled our noses until we gagged.

Jars rinsed, we trotted like ponies back to the creek
for more, wading for hours,

dragging time through our nets long enough
to last the rest of our lives.

That creek is dry now.
The two younger brothers have gone

to a foreign place west of the moon.
Just when I think I can see them,

they disappear. And the one older than me
has vanished in his own way.

The dog sitter’s note on the kitchen counter
says she left early for a stop at Hobby Lobby.
Needs cross-stitch thread.
She’s doing the Mona Lisa.

Makes me remember The Nat “King” Cole Show
my family watched on our black-and-white TV:
Cole, wearing his Colgate smile, plays the piano,
his voice painting Mona Lisa into a vision
that brightens the living room of our house.

Some evenings I sat on the front porch
and sang to the neighbors after Ronnie
took requests, telling them
Irene’s singing tonight.

What dreams died on their doorsteps
I could only imagine.

Many years passed before I entered
those magnificent rooms of the Louvre,
stood face to face with her—thinking
of my mother, what they had in common:
tenuous smile, boxed-in world.
Whether they were light-hearted or grave.

And how I never knew all those years
growing up that The Last Supper hanging
above our buffet was a Da Vinci.

Words to Wang Wei on the First Day of Autumn

How different you would find it here.
I sit in a bamboo chair on a concrete patio,
not in a boat on the Han River,
my two dogs at my feet, barking
when the geese fly over the pond.
This morning I drank coffee, mesmerized
by the clouds. Amazing circles they had formed—
a heavenly show of what dreams can paint.

Within a few fleeting minutes
while I warmed my coffee,
the geese had disappeared, the air
had shifted, and the clouds looked
like goose down the wind had loosed.
In those moments when I was not looking,
all had changed.

Now I must tell you.
My youngest brother has died.
If it were possible I would paint
a cloudburst on the sky,
wishing you could see it, old friend—
you who drifted long, long ago,
leaning on a single oar . . .
without thought of going home.