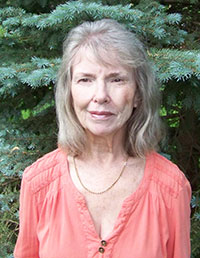 I am editor of Illinois Racing News for over 25 years, a monthly publication for the Illinois Thoroughbred Breeders and Owners Foundation, published by Midwest Outdoors LLC. I live with my husband and assorted animals on a small horse farm in Northern Illinois.

The poetry in this collection is concise yet sonorous filled with surreal imagery, magic, myth and metaphor. Joan Colby balances observation, feeling and imagination in the narrative that threads these poems together in this little volume. She celebrates the ordinary like the radish and mourns unninhabited towns and old machinery. In the end, “Each story is a myth / In which someone discovers fire / And then it all begins.” Bittersweet is an enjoyable collection of poetry to be read and re-read.
–Jonathan K. Rice, Editor/Publisher, Iodine Poetry Journal

A book for our times.  With her usual wit and wisdom, Joan Colby meditates on breakage and betrayal, disenchantment and dislocation, telling us what to make of a diminished thing and how to counter things gone to wrack with “a song or a poem.”  Don’t say you were not warned.
–David Pichaske

Wild, dark, and beautiful, purchased with years of concentrated living.  Poems of intense sadness with moments of hard-earned joy shining in them, like broken glass reflecting the light of stars.
–Ruth Bavetta

Crystals fracture in the eyes
Assemblage. Abalone secrets.
A mother-of-pearl compact
Holds heart’s delights. A scorn of cymbals
Or a veiled arrogance. What memories
Conclude is chamber music
Or the degradation of a mirror
In myopic silvers.

A chalice of lilies
Taunts the afternoon as a funeral dirge
Swoons along blue avenues of the
Forlorn city. High heels drumming
The sidewalks senseless.
Skyscraper attitudes.

A plenitude of banknotes or castanets
Dance to moonsongs of horned owls.
Darkness signals its casuistry. Go blind,
Go naked, go dauntless
Until only the monolith’s inscription
Baffles you, stops you short.

A DICTIONARY OF LOSS

This winter hooks with atypical
Weathers, strange as the atonal music
We found interesting, not alluring,
The way anything rare or precious
As uranium can capture a fancy.

But loving,that’s something altogether
Different. Based on nothing but a pay-
Off of cascading hormones, or a similarity
In how we agree. It’s our forte
Isn’t it. This kiss, this covenant.

Or maybe it is simply the way
We oblige each other. How weather
Deconstructs our plans. The perfect day
For an outing. Ah, we are postulants
At its altars. And then it rains.

Our conversation cut with scissors
Of good intentions. The scraps collected
Won’t coalesce into the patterns
We once intended. The sinecure denied,
Our hands fit with the labor of black gloves.

And touching that once could flourish
In any weather, in any glasshouse
Or a wild bed of forget-me-nots
Has gone to wrack, its cheapskate
Notions counting up all we have lost.

A WORLD OF SADNESS

You will not be sad in this world
Though all the music haunts
Hills garbed in fog. Though lilies
Fade in their turquoise vases.
The slow water passing languorously
Beneath the ancient wharf.

A woman on a bench clasps her hands.
The book unopened. The lost poem
Written by a slave whose tongue was severed
For telling how it felt: this loneliness.

Acknowledge the red knob of the closed door.
The broken window where a child peers
Into a littered alley. The rags of dream
You gather to knot about your throat.

Renouncing sadness: that old bicycle
Whose wheels no longer revolve,
The brakes that seize pitching you
Into a pool of milk.

Adorn yourself with the black silks
Of all the midnights spent weeping.
It was not loss so much as
Safekeeping. The locket congealed
With starshine. The opal rings
Of your governing planet,
Saturnine, ironic, denying
The sadness that hoods
The visible world.

Here are the trees of morning
where birds echo the songs of dinosaurs
and stones speak
a language that water
running over their tongues, invents.

The world won’t pause
while you slumber.
The leaves mulch underfoot,
The spiderweb struck down so carelessly
The tiny mites you soap from your hands.

Rumors abound in the hollyhocks.
You are simply the minister of your garden.
Each green thing has its own dogma
Of which you know almost nothing.