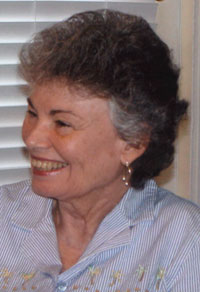 Ann Howells is the product of a large, extended family born, raised and educated on the shores of Maryland’s beautiful Chesapeake Bay. Family life and her native region are frequent themes in her poetry. After earning her Bachelor of Science degree and while working in research cryo-mycology (study of fungi at ultra-low temperatures). She co-authored a treatise which appeared in the scientific journal Mycologia. Ann lived in various regions along the East Coast before moving, in 1979, to Texas with her husband, Dennis, and two children. Besides writing, she taught oil painting for the Carrollton Recreation Department and for a local shop. She is an avid reader and book collector.

Ann is a member of Dallas Poets Community, a 501-(c )-3 literary non-profit and serves on its board. She is managing editor of its internationally distributed journal, Illya’s Honey. She has served as a judge in the Dallas Public Library’s Youth Poetry Competition since its first year. She has also served as judge in the Dallas Poets Community’s Open Poetry Competition and Open Chapbook Competition, the Richardson Public Library’s Open Poetry Competition, the Hi-Tech Institute Poetry Competition and the Brazos Writer’s Poetry Competition. With fellow writer, Michelle Hartman, she helped establish and build libraries at Walt Whitman High School, St. Luke’s Episcopal Church and Hi-Tech Institute. The two also coordinated a reading series joining the creative groups of Carrollton/Farmers Branch high schools with established area poets. Students received critique, encouragement and publishing tips from adult writers. This reading series provided the impetus for Starbucks to launch their 1999 Summer Reading Series. Ann also volunteers as a reading mentor at a local elementary and goes with other Dallas Poets Community poets into elementary, high school and college classrooms to encourage students to read and write poetry.

Ann’s work has been adapted as dialogue in the Beardsley Living Theater’s play, Kalliope’s Rampage, incorporated into services at the Unitarian Universalist Church, and exhibited in print alongside artwork by Edward Pittman, Dan Coffman and Boyd Elder at Sherry Lane Eye Gallery. In 2001, she was named a “distinguished poet of Dallas” by the Dallas Public Library. Her poem, “La Resistancia,” was nominated for a Pushcart Prize in 2005. Her poem, “Without Warning” took first place in the 2006 southwest Writer’s Club competition, and her poem “Ziggy and the Git Warm” took third in the 2007 Richardson Library competition. She has two chapbooks, Moonflowers (Kokopelli Press) and What I Didn’t Tell My Father (Limax Press), both out of print. Her poetry appears in various small journals and anthologies, including: Red River Review, Concho River Review, Borderlands, Gertrude, Texas Poetry Calendar, Avocet, Sentence and Sulphur River Literary Review among others.

She has lectured at the Manske Library’s Authors’ Symposium, at Shepherd Center in Garland and has appeared on a variety of panels. When she is not involved in poetry pursuits, she enjoys photographing the varied architecture of Texas courthouses. She has captured 163 so far.

The old man places his walker
within reach of his big, blue chair.
Reads his newspaper. Hums
songs from the forties or before.
At 92, he retains perfect pitch.

His blind wife bustles in the kitchen,
cooks by touch and taste, serves
an array of fresh vegetables
from the Mennonite market
and seafood from the bay,
on dishes almost clean.

What seems to us a cage
is to them a nest; as long
as the TV brings home Jeopardy,
all is right with the world.
Sere and Hoary with Frost

We sleep in the room beneath
the eaves. Dust motes swarm
in scanty, ambient light–
stars in chaotic motion
defy physical law. It is winter;
trees are grey ribs.

He lies quiet, silver hair smoothed
by many hands. We touch his shoulder,
stroke his arm, swaddle him in music
of women’s voices.

In the hall, men shuffle, exchange
timeworn tales that comfort.
They are uneasy, do not know
how to wait.

Tensile strength of emotions
tested, pressed, hammered
so thin a single breathy word
could shatter us.

We gather at the table
in grief as we have
so often in council
or celebration.

Each averts his eyes:
the riderless horse,
boots backward in the stirrups,
filled glass untouched
upon the sugar skull altar,
missing man formation.

Then, I take his chair
not usurper, but custodian,
to keep us whole.
I am flag at half-mast,
the unchanged room.

I drape the mirror. No one
says a word, but the chair
is left, each time, for me.