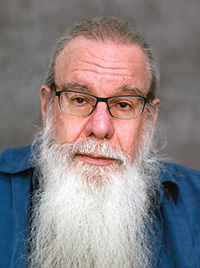 Aaron Fischer worked for more than 30 years in high-tech journalism and business-technology publishing, documenting both the rise of the PC and the growth of the Internet. He lives in New Jersey with his wife, a graphics designer and paper marbler.

Aaron Fischer has written a breathtaking series of spare, hard-edged poems depicting Weegee and his street-noir shots. Fischer deftly enters the frame with his own fraught memories triggered by the desperate and the dead in the photos. A work of profound empathy and stark beauty, Black Stars of Blood: The Weegee Poems is a brilliant debut. —Sharon Dolin

Aaron Fischer’s poetry is like hearing the blues while walking down a street around midnight. He captures the beauty and pain of the “wincing light” in Weegee’s photographs. Sometimes the narrative takes a surprising turn into the life of the speaker: “I’ve fallen for so many women on their way down.” Each poem is like a short film, scenes of crime, injury, poverty, racism, sex, and death witnessed with a clear, compassionate eye. This is a gorgeous book of poems. —Susan Browne

Sometimes it felt as if the real city didn’t exist
until I started shooting it. I don’t mean the sun-chafed
towers, their capstones and cornices grapevine-wreathed
or embossed with blank, heraldic shields, not the upper

reaches of Fifth and Madison, late afternoon,
the shop curtains drawn against the wincing light,
but the city I witnessed and wanted to show:
kids sleeping on fire escapes, bruised transvestites

stepping down from police van, corpses
dumped behind the candy store with the bundled Sunday papers.

Ambitious and self-promoting,
a runty Ukrainian Jew
with all the subtlety of a pushcart vendor,

I gave the city exactly what it needed:
enough night and death to see itself clearly

Young Man Smoking a Cigarette After a Car Crash

Leaning over as if to kiss the blood
from his friend’s broken face, the boy holds

a cigarette between his smudged, blunt
fingers, offering it to the wound

that was his buddy’s mouth, the delicate
damaged head harbored by his other arm.

The side mirror recasts them in close-up,
so we almost miss the third who’s joined them

at the driver’s jagged window — eyes barely lit
by the flash, his face a dark moon —

the body’s acrid flush of acid,
the chill beads of sweat pooled at the crotch.

Lovers on the Beach, Coney Island

What stops me about this gritty foursome
framed against the black beachscape
thinking they were safe in the dark,
a passionate tangle of arms and elbows
half on the blanket, a loose-petalled flower,
in one woman’s hair, isn’t just
that they were still buttoned into street clothes,
creased and wrinkled as a dirty tablecloth,
or that they were so good at knowing
what they wanted and getting it,
but that Weegee got the shot at all.
Then I read the caption and realize he was shooting
“invisible light,” his Sunday-comics moniker
for infrared film and flash. The lovers
couldn’t see the brilliant flare that fixed
the stray curls on her nape, the down on his,
lifting them and their ardor out of time
any more than Weegee could see them.
Prowling the beach in his socks at the new moon,
brogans kicked off under the lifeguard tower,
learning to shoot by ear —
the Wonder Wheel powered down,
Ripley’s Museum and the Skee Ball game padlocked.
He listened for the bitten-off love cries, the groans and sobs,
his camera coming up by instinct,
each photograph a betrayal of those lovers
with nowhere else to go, the same people
he claimed as his own.