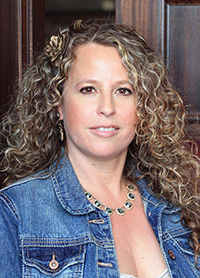 Jenifer DeBellis is Pink Panther Magazine’s executive editor and directs the Detroit Writers’ Guild. She earned an MFA in Creative Writing from Solstice of Pine Manor College. A former Meadow Brook Writing Project fellow, she facilitates workshops for their writing camps. JDB teaches writing and literature for Saginaw Valley State University and Macomb Community College. When she’s not editing or writing for others, she steals time for her own craft, which appears in the Good Men Project, Literary Orphans, Sliver of Stone, Solstice Literary Magazine, and other fine journals.

Poignant and tough, the poems in Jenifer DeBellis’ Blood Sisters remind us of the fierce loyalties and eroticism that fuel childhood and adolescence while at the same time celebrating the grace and resilience with which the speaker survives those conflicts. Unflinchingly honest, surprisingly tender, these poems spare neither the children themselves nor the adults who should be their protectors. The memorable language and vitality of Blood Sisters will reverberate long after you have finished this book. —Kathleen Aguero, author After That

Debellis’ poems are word vital, full of true-blood rites of passage, and laden with the womanly, sisterly, sometimes manly, and certainly family-tried wonders and mishaps that drive our lives. Her voice is rich, her imagery sharp and accessible, and her heart, right there on her sleeve in vivid and generous human color. –Anne-Marie Oomen, author of Uncoded Woman and Love, Sex and 4-H (winner of Next Generation Indie Award for Memoir)

Rather than drink blood, we sealed
our sister oaths by spitting on our cuts

before pressing our palms together.
As we pressed we pledged to share

all secrets & knowledge. We swore loyalty
over boys, family, other friends, life

matters & material things. Then agreed:
breaking our bond would be a spiritual death

that dragged a distant tide
from a sandy shore neither one
dreamt of anymore.

Their argument heated up
on the corner of Hawk & Panther.
Mom rushed the cabin door,

Pops so close behind her,
his fist pumped the aluminum frame
on the storm door’s return, crushing

file down the winding driveway.

Twilight’s silver sheen cast them
into shimmering ghosts as they
took their feud to the road.

“I told her. I told her everything.”
Mom’s betrayal clung to the air
between them the way dust motes do

when swept into Autumn winds.
“Everything?” Pops asked, punching
his thighs. “Jesus Christ, everything?”

The daughter settled onto a rotten
redwood stump, her toes rubbed raw
from digging them in the crushed

slate & sand that ringed the stump.
A breeze from the lake bit her
bare shoulders, pricked the baby

fine hairs at the nape of her neck.

with the words bastard & adopted—
held one word in each hand
to counterbalance new meaning.

Her parents’ voices drummed
into the distance. Her fingers traced
the words, traced each rough ridge

& worn down edge to commit
them to memory. The girl
recalled a prayer she learned.

Blessed art though amongst women.

She felt the full weight
of her newfound words, rubbed them
once more before standing from the stump.

Blessed is the fruit of thy womb, Jesus.

The first time someone shoved something foreign
into me I couldn’t decide if I liked it or hated it.
We played house in Sissy’s basement. It was

my turn to play mom & her older brother’s turn
to be dad. She was my second blood sister—
an oath we took in first grade when we moved

in next door—but it wasn’t like that made her
brother my blood brother. He was already
beneath the workbench waiting when Sissy

& my little sister helped me under the table
skirt they let fall as soon as I was in. We’ll feed
the babies while you two sleep, my friend said.

I froze as darkness closed me into a space similar
to one in my own basement where spiders as big
as my fist never fully died when smashed.

He pulled me onto his chest. His lips found mine
his first try. When I pulled away, he shoved
his tongue between my parted lips. Our teeth

grinded as he rolled over on top of me. I gagged
when his tongue moved deeper than anything
other than food had ever gone. Someone or some-

thing was watching us, I was sure of it. The chill
of concrete stung the skin between my sundress
straps & I shivered, my teeth chomping his tongue.

He rolled me back onto his chest & kissed my neck,
my shudders breaking the rhythm of our quick
breaths. The swell in his pants pressed my groin,

revealing a super power I never knew I had.