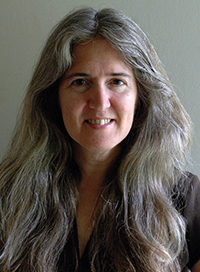 Janine DeBaise’s poetry and creative nonfiction reflect her involvement with environmental and feminist issues. Her writing has appeared in Southwest Review, Portland Review, North American Review, and Orion Magazine. Her poetry chapbook Of a Feather was published by Finishing Line Press as part of their New Women’s Voices Series. She teaches at the SUNY College of Environmental Science & Forestry in upstate New York. In the summer, you can find her sailing Melonseed #153 in the Thousand Islands region of the St. Lawrence River.

A gripping and unflinching hymn to women’s bodies. These sensuous poems speak with authority and grace, providing a timely insight into a woman’s physical and spiritual journey in American culture. ~Sheryl St.Germain, author of The Small Door of Your Death

Body Language transfigures the female coming-of-age narrative (living dolls, narcissistic lovers) into a celebration of the coming of age, replete with breast milk, blood stains, and stretch marks. From the nightmare of “Every Girl’s Dream” to her final idyllic “Vision” (with a lush midway interlude in Paris), DeBaise maps terrains of bodily experience, then bushwhacks beyond convention to genuine intimacy with others and the earth, breaking mirrors en route and making “ornaments” from the “shards.” ~ Laura-Gray Street

Janine DeBaise’s powerful Body Language travels from the sarcasm of its first poem, “Every Girl’s Dream”— “When women get in touch with the child inside / they find that child holding a doll / and she’s Barbie”—to the ecstasy of its last poem, “Vision”—“We will worship in the forest / and in the kitchen, with our bodies / and with wildflowers and with each other.” Angry, tender, sexy, prayerful, candid and compassionate, she explores the joys and vicissitudes of the flesh. ~Ann Fisher-Wirth, Author of The Bones of Winter Birds, coeditor of The Ecopoetry Anthology

I just found out something
that has changed my life,
given me hope.

My breasts are the same size as Barbie’s.

Yes, it’s true. I could be the woman
of the American dream. It’s within my grasp.

Okay, I know what you’re thinking.
And you’re right. I need to lose
sixteen inches from my waist.
And eight inches from my hips.
But I think that’s possible.

I’m going to start now
to grow my hair long.
Dye it blond. Brush it
with polyurethane to make it stiff.

Of course, I’ll have to learn how to walk around on my toes.
No more hiking boots or comfy sneakers.
It’s high heels from now on.

But it will be worth it.
Every second, somewhere in the world,
two Barbie dolls are sold. Sixty-four
have been sold since I began this poem.
Everyone knows: she’s the perfect woman.
And I am going to look just like her.

My legs need to be three feet longer.
And of course, I’ll have to keep breastfeeding forever
so that my breasts don’t get smaller.
But I can do that.

Maybe you think it’s strange for a sex object
to breastfeed a baby. Madonna and I —
we’ve changed that image.

I would need some minor surgery. My neck is way too short.
I’m thinking of getting a transplant from a swan.
Yeah, I know how people in Manlius got all upset
when teenagers killed a swan for no good reason.
But this would be a good reason.

I could be Barbie.

When women get in touch with the child inside
they find that child holding a doll
and she’s Barbie.

I could be the object of hope for every American woman.

And I’d win the prize.
Barbie’s reward.
Her one goal, her one dream.

To be with Ken.
A man with a year-round tan
a perpetual smile
and no penis at all.

What more could a woman want?

The paper doll doesn’t have breasts or belly

You can put her in a cardboard stand

Tourists in Washington stare at a Peruvian mummy
preserved for 500 years by a mountain glacier.

A frozen thirteen-year-old girl
discovered in the Andes.

who insists on prosecuting
the five men who raped her.

Carrier Corporation came to the rescue.
They built a refrigerated case

to preserve the frozen girl.
So the public can stare at her. Forever.

The woman in the bar in Gouverneur was drunk,
passed out on the floor in the ladies’ room

so the men carried her unconscious body into a booth
and one at a time, the five men raped her.

They named her Juanita after the
man who found her body. No one knows

from her own body. Or what name she used when
she played with other children in the village.

Krista’s name is in the headlines,
her picture on the front page.

Reporters say they cannot protect
a victim of rape if she decides to seek justice.

She knelt on the ground and a man
with a club fractured her skull.

They wrapped her body in a cocoon of cloth,
put corn and cocoa leaves in the tomb.

The five men from Gouverneur pled guilty.
How could they not? They had bragged the story

all over that north country town.
“It’s not like she was a virgin,” people said.

Time Magazine says the ice maiden is a great discovery
for science. An important object of study.

She was a thirteen-year-old virgin
offered by the Incas to the Volcano Ampato.

We don’t call it murder
because it was part of their culture.

And sent them back to the bar
for more beer, more bragging.

The woman who had been raped yet again
put her head down and cried.

Carrier is proud of what they have done for science, for tourism.
A triumph of technology. A triumph for America.

We know what to do with the body of an adolescent girl
so the public will gawk at her for hundreds of years.

“It wasn’t rape,” protested one of the five men who carried
Krista’s limp body from the bathroom into a dark booth.

We don’t call it rape
because it is part of our culture.