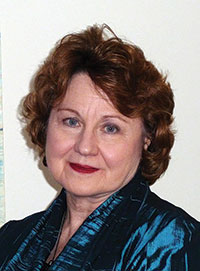 Gail Peck earned her M.F.A. from Warren Wilson College. Her first chapbook won the North Carolina Harperprints Award, and her first full-length won the Texas Review Contest. Main Street Rag published her chapbook Foreshadow (a finalist) and two full-length books, Thirst and Counting the Lost. Other chapbooks include From Terezin (Pudding House) and Within Two Rooms (Finishing Line Press). Poems and essays have appeared in The Southern Review, Nimrod, Greensboro Review, Louisville Review, Comstock Review, Mississippi Review, Rattle, Connotation Press, Brevity, Cave Wall and elsewhere. Peck’s work has been widely anthologized, and she has been both a finalist and semi-finalist for Nimrod’s 2007 Pablo Neruda Prize for Poetry. Her work has appeared in numerous anthologies, and has been nominated for a Pushcart Prize and Best of the Net. Her essay, “Child, Waiting,” was cited as Notable by Best American Essays, 2013.

Gail Peck’s The Braided Light gives us both a form and, indeed, a language which is hers, empowered in its idiosyncrasies, and which becomes our own lens through which we may “read” Van Gogh, Monet and the poet herself. The concept and its execution are refreshingly unique amid a wash of contemporary poetry so monolithic in its normalcies as to be numbing. More exciting still, we can find in these poems that rarest of transferences: Van Gogh and Monet, through Gail Peck’s poems, are reading us. The old lesson of beauty and pain reconfigured into stunning new possibility is made new. This gifted poet has given us something entirely her own, and urgently needed. —Tom Yuill, contest judge, author of Medicine Show

In these luscious poems, emanating from paintings of Claude Monet and Vincent van Gogh, other scapes emerge transfigured by the poet’s eye. In “Grand Decoration, the Clouds,” Peck writes, “This is how I want death to be, not the white and white / of sheets . . . to mark the days. / Let me be lifted by the clouds / if only in reflection, and not at the dark edge / . . . but near the center, the lavender wisteria.” Then again in “Still Life with Birds’ Nests,” “. . . light is braided / in straw and debris . . . where eggs lie until the first fissure . . . breaking silence into refrain.” And what a refrain as the book unfolds on a plethora of scenes loaded with lilies, bridges, willows, sunflowers, crows and wheat fields. All this woven into the poignancy of the personal. Through it all, the poet walking us down the path of reinvention. —Julie Suk, author of The Dark Takes Aim

In The Braided Light Gail Peck entwines sketches of two masters of light, Vincent van Gogh and Claude Monet. In her momentary portraits we catch glimpses of the lives and sorrows and achievements of two artists that Time at last has ennobled. The poet knows that “Whatever your sorrow is / is yours alone.” She knows too that sorrow is not the real conclusion. “Fly away, magpie, take the air under and over your wings.” Here is a poignant envisioning of visions, a look into the heart of light. —Fred Chappell, author of Familiars

In Provence we stayed at a house
like this one with a window that opened
onto hills like these. No screen.
Lavender filled the room.
I’d lean my elbow on the window sill,
watch the changing sky.
We’d walk the pathways where flowers
we couldn’t name grew, past vineyards
ready for harvest, large tempting
clusters of grapes. Hearing gunshot
no longer alarmed us—rabbit hunters. Yet
you cautioned me, for I’m known to stray.

In town, I’d search for the best goat cheese
to take with us. First a lunch
of duck with berries, a full-bodied wine.
Driving back, sated, to that small room
with the quaint bed where we’d make love, and love again.
Morning light waking us to coffee and pastry
on a decorative plate. Then, full once more,
we’d go out to take the day the painters made.

near cypresses
in the foreground peach trees
flame white

waiting for harvest
as the birds now wait
among the blossoms

and wake longing
to return to sleep

Here, reflected in water, a human face,
dark eyes, hint of nose and mouth, recalling
Monet’s self-portrait of 1917. Those circular strokes
of long beard that also shaped the water lilies
he so loved. Once, at an artists’ colony, I watched
as a woman made a face of clay and placed it in the river
then took photographs at intervals as it decomposed
in the current. It was beautiful, peaceful,
all burden lifted until there was nothing left.
This is how I want death to be, not the white and white
of sheets, meals and meals or day following night
to mark the days. Let me be lifted by the clouds
if only in reflection, and not at the dark edge
of this painting, but near the center, the lavender wisteria.