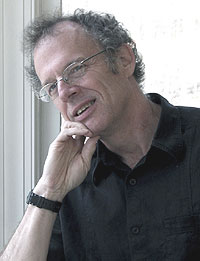 His second novel, Faith In What? was published by Avisson Press, as was his first collection of short stories, And Fools of God.

He has edited 2 anthologies that featured the work of North Carolina writers such as Allan Gurganus, Reynolds Price, Lee Smith, Fred Chappell, Elizabeth Spencer and others. He also edited Taboo Haiku, which featured writers from Asia, Europe, Australia, New Zealand and the US.

In addition he’s published two sports biographies for children, one on Olympic skater Sarah Hughes, and the other on basketball player Yao Ming. The latter book was cited as one of the 40 Best Young Adult Books of 2004 by the Pennsylvania Librarians Association.

His poems, stories, plays, essays, and feature articles appear in literary and commercial magazines around the world.

He has received Creative Writing fellowships from the National Endowment for the Arts, the North Carolina Arts Council (twice), and the Pennsylvania Council on the Arts.

Begin, if you dare, with this moment “when your wife confronts incest /when she attempts to free/ her grief allow/ the tears to curve/ a flowing sickle/ around her trembling mouth…” and you will enter the world of Breakdown: A Father’s Journey, poems that complete the rest of the sentence, the cage of it, the fleeting hope, the nightmare hours of each day, rendered in such sensuous detail that they could be love poems. Richard Krawiec’s courageous, unblinking art has created a collection that is both terrifying and beautiful. “I recycle today’s images/into language I hope/ will help me endure…” he explains. The poems that he has wrought from this struggle are harrowing, yet tender. They are, finally, nothing less than love poems.

The Insistence on Living

there is too much Spring to deny

father got you
drunk in a hotel room in Mexico

we are she tells me
having a nice autumn