The Advance Sale Discount price on this title has expired. Those who prefer to pay by check, the price is $19/book (which includes shipping) and should be sent to: Main Street Rag, PO BOX 690100, Charlotte, NC 28227-7001. 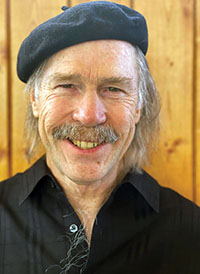 Donald Levering was born in Kansas City, KS and grew up there and in Oceanside, NY. A former NEA Fellow, he won the Tor House Robinson Jeffers Award, selected by Eavan Boland; the Carve Poetry Prize, judged by Carmen Giménez Smith; and the Literal Latté Poetry Award. Levering’s work has been featured on Garrison Keillor’s Writer’s Almanac podcast. His Coltrane’s God was Runner-up in the New England Book Festival contest and The Water Leveling With Us placed 2nd in the National Federation of Press Women contest. He lives in Santa Fe, NM, where he volunteers as a U.S. citizenship tutor.

Levering’s Breaking Down Familiar offers beautiful elegiac reflections on family and the mystery of death. These wry, tender and questioning poems pull us in. We go to hospice and graveyards, journeys we resist but deeply recognize. At a hospital bed the speaker reflects—”Not I who woke to diminishment/ though, loving you/ I am wounded too.” There is joy, too; father’s knuckle balls; mother’s cracked hymn singing. The book is a paean to compassion. ~Renny Golden, author of Blood Desert, University of New Mexico Press, WILLA Literary Award, was named a Southwest Notable Book of the Year 2012 and was a Finalist for the New Mexico/Arizona Book Award.

In these poems left in the wake of family-size disasters—drug addiction, illness, death, dementia, crippling old age—Levering conveys the emotional desolation in striking imagery but balances it with hints of renewal. He also finds, in the most mundane object or ordinary situation, the place where the universe opens up and gives us a peek before it seals itself off again—and we need another poem to repeat the magic. ~Vincent Czyz, author of Adrift in a Vanishing City and The Three Veils of Ibn Oraybi

A RUNWAY LIGHT FOR MY BROTHER

Remember those bottles Mother hung in trees
to trap malignant spirits?
I see them in the blue lights flanking runways.

In the blackout of news from you,
I want to picture them aglow
along the airplane avenue.

Instead I see you coming down,
another rough landing, anxious
baggage claim and shaky cab

You would lead us out in bed sheets
among our mother’s spirit-trees,
blindly bumping limbs and hearing thuds

you’d say were ghosts of murdered men.
Teasing me, you’d disappear
as those bottles whistled with the wind.

You wrote about your bus to the interior—
the anaconda dropping from the luggage bin,
the caught pickpocket beaten and strangled.

You quipped your days are nothing but
Another trip, another pitch,
another sale, another binge,

related how a blind man took your hand
and led you stumbling to the clinic door.
Felt his goddamn way along the walls,

you said, before your emails stopped.
I cry, and call
on one blue tarmac lamp to guide you

running out of room to land.

A father has to treat his sons the same.
You’re like his twin, but he is not so thin,
his pupils aren’t the size of poppy seeds.
But I’ll not tell I think you’re back again.

You’d be his twin, except you’re stick-man thin.
I’ve guessed what happened to your missing car,
will not let on I see you’re back again,
assume you need a loan till he gets paid.

I won’t reveal they’ve repossessed your car.
You’re nodding low with heavy-lidded eyes.
I’ll act like I believe I’ll be repaid
and blame your craving on your parents’ genes.

I see you nodding, heavy-lidded eyes.
I can’t allow my son to be deprived
and have to blame your habit on your genes.
Ashamed to hear you had to be revived,

I won’t permit my son to be in need.
Your pupils squeezed the size of poppy seeds,
I fear next time you might not be revived.
A father has to love his sons the same.

Coyotes lope at the outskirts
of our parents’ party under a ramada
looking out on a desert sunshower.

Two hours ago Dad cast off
his stroke-mangled speech,
ordered a piña colada,

and resumed his antic charm—
flirting with crude remarks
to servers of hors d’oeuvres.

Now he yanks out all his tubes.
To hell with dialysis.
It’s my turn to go.

Let’s just get this show on the road.
Rain starts drumming the roof
as he barks commands—

Unlock the wheels,
put your shoulders to this rig
and let’s get rolling.

saying last goodbyes.
We push it faster and faster,
the gurney’s turbines kicking on

to taxi him into the desert
lit by an outburst of white and red
and yellow cactus blooms.