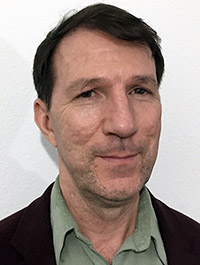 Timothy Robbins grew up in a small town with little diversity. He has spent much of his life making up for this lack: living all over the U.S., studying abroad, making a career teaching ESL, and settling down with a Vietnamese husband. He has been a regular contributor to Hanging Loose since 1978. His poems have appeared in Three New Poets, Slant, The Main Street Rag, The Opiate, Wisconsin Review, Off The Coast and others. His collection Denny’s Arbor Vitae was published in 2017. He and his husband of twenty year in Kenosha, Wisconsin.

These poems reveal a vivid, abundant, puzzling world of strange, familiar objects and people. There are cabins built of colored pencils; shipwrecks on the bedroom carpet; phones doubling as weapons; Billy Strayhorn’s glasses; Dad, and Mom, and Mike. Our guide is both a patient observer of what’s immediately visible and a confident seer into what is not. His sight is pained, bemused, attentive to beauty, and above all loving. –David Holdeman

With language so evocative, you almost feel as though “the world has breathed on [you] again,” Robbins’ imagery, tone and ability to summon a narrative in the space of stanzas is at once both assaulting and refreshing to the senses. From the sexually charged (but then, what isn’t with this collection?) “Carrying Bodies” to the inquisitive “Notes For His Screenplay” (filled with appropriate allusions to James Dean), each poem offers a little glimpse into our inner deviant. –Genna Rivieccio, Editor-in-Chief of The Opiate Magazine

Writing as small as a list of
ingredients. I say it was
emblazoned and you will
agree. Plum was emblazoned
in gold on the color pencil
I sketched this with, writing
in a cabin built of color
pencils pledged to each other
with paste. The paste was
made from the sleep in my
eyes and the eyes of guys
who surrounded me like
Willy Brennan’s highway
men or the guard around a
prince. There were no plums
in this cabin of long
skinny motley logs. To say
nothing of kiwi and passion
fruit. The mangos were bell
peppers in Robin Hood
clothes. The only rhyme we
possessed for these squat
un-dancing beaux was
Tango. Tangos, we knew,
were the Devil’s way of
poisoning movement. One
of the guys, with a piercing
thumb, pulled out a plum,
waved it in my face, rubbed
it on my bum. When the
witch came to trap me with
an apple, I insisted on the
fruit I craved. Grudgingly
she fetched a ripe specimen
the color of her royal cape,
as juicy as a sponge. I ate it
as slowly as I could, which
wasn’t slowly at all. “Now,”
she laughed, “you’ll be raped.
Now you will die in the
woods.” I had other plans. Yes,
princes would come and
kiss my sticky mouth. But I
would never wake up. I
would remain myself, alluring
and adaptable as a tale.

Why are you looking at me like that,
Billy Strayhorn? Like I’m a new kind
of cigarette you don’t know how to
burn — and while you can’t be happy,
you can be patient if I’ll just stay
poised at the tip of your cigarette holder
for as long as it takes you to learn. Mean-
while the Gauloises in your other hand,
the fag you’ve kissed and sucked and
nibbled and spat on, the stick you’ve
licked for years like a clarinet
is getting closer to your fingers and your
fingers are getting closer to it, ciggy and
digits intent on ending your soft, deeply
dyed playing. Your glasses speak to me,
subtly gainsaying each of your eye’s
single-minded assertions. They talk
of their designer and of the engineer
who drew the machine that made them
and the tool and die maker whose hands
gave birth to the machine’s parts and
of a man and a woman, a Duke or a Lena,
on the assembly line. Their hearts begin
to sense their own designs, purposes
their maker never dreamed of. I think of
you as a cave I stumble on just before
a storm. Your name is incised above
the entrance in calligraphy as curly as
a treble clef. My man, like you, has
glasses he mustn’t and I can’t forget.
Mustn’t and can’t subdue.

There was a shipwreck on the bedroom carpet. All
the bodies were naked as night for they had all been

making love with me at various points in the past
at the instant of impact. Most were bigger than

I was. Marvin, Peter, Doug plus a dozen more thug
imitators and whale facsimiles cast up from the dullest

seas, scratching the sand as I dragged them further
inland. I stood on the windy strand in a dark gray

or you at your anorexic stage). I caught my breath,
resting to be the single pall bearer for Nathan, Takashi,

Tino. Being nearly the same size, we made a tight
rectangular puzzle, not a lopsided mess of mis-sized

pieces. There were teachers. Our love-making had been
intellectual, with arguments as naked as day. These lay

among musicians who taught me to play by touch,
who made a striptease of unsnapping lids, unzipping

soft cases and easing their instruments out. I trundled
Steven in a wheelbarrow, pulled Billy in a red wagon,

dragged Marty and Rick on shower curtains. You’d
think after a while I’d feel I was rolling heaps of dirt,

pulling loads of dolls, carrying rolled up rugs that
hid no murder victims. It wasn’t so. Not even for foes

and strangers. Not for the singer who looked suspiciously
like Jesus, or the senator grimacing like Judas or the

old man reeking like Lazarus. I toted one after the
other across my shoulders to the public library, swept

the books from the shelves and stretched the corpses
in their places. Sometimes extras for meager pay saw

my body sitting up, bouncing down the sidewalk in
midair like Doris Day in Pillow Talk without Rock

Hudson. The director commanded soothingly,
“Stay where you are. He’s not levitating. He’s being

kidnapped by his own invisible Self.” The voice of
that one self-important bystander that masters every

emergency. Emergency or crisis. The choice depended
on the rhythm. When the line sounded right I was done.

I clicked save and returned to the movie I’d begun
before crawling into bed. About the time Ben Stiller

started to envy his son, I remembered how different
the bodies and the act of carrying had been in my

head, lying on a futon before dawn. Some were still
breathing. Some weren’t even bleeding.