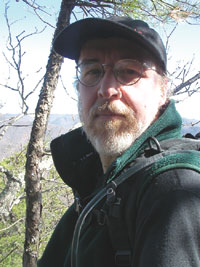 Bill Griffin is a family physician in rural North Carolina, where his “writer’s group” is a hawkswept footpath that wanders from Basin Creek up the Blue Ridge. Bill serves on the boards of the NC Poetry Society and Poetry Council of NC and organizes the annual Foothills Favorite Poem Project in his home town of Elkin. His first collection, Barb Quill Down (Pudding House, 2004), was a finalist in the National Looking Glass Chapbook Competition; his poems have appeared in a number of regional and national journals, and several have been set to choral arrangement by composer and conductor Mark Merritt.

Where the world ends
she stands at the highest point—
where the last Slickrock pebble
crumbles away before her feet
fearless at fearful openness
she takes the next step toward falling.
How far we have climbed:
Little Santeetlah, Saddle Tree Gap,
the backbone ridge and gulf of sky;
welcome sweat and thin air,
swallowed in wildness, her pace
as light as the towhee’s warning
that calls her higher
than I am willing.

Where the world ends
she straddles the abyss and turns,
her face and the sun suddenly
uneclipsed—I see
only her reach, the urge of her hand
pulling me toward her
up steep hesitation into
rarified possibility, pulling
me to stand alongside where dawnlight
arouses the yawning valley,
where Cheoah’s blue river eye
and her own awaken me . . . daybreak

where the world begins.

Eight years old at Fort Macon beach,
little buzz-cut red-haired kid jumping
jumping into the waves, jumping up
to let them bash him, diving down under
to escape, laughing in the powerful powerless
pitch and yaw of breakers’ slap embrace,
laughing in the glide beneath their anger,
turning as the next one crests to push and ride
the punch of its fist, the froth in his ears
sounding like a hundred miles an hour
when it slams him into the shoal of shell bits,
coquina, mole crabs, broken cockles, then laughing
as it tries to drag him out to sea.

Can’t you see him there, that same kid
sitting across the table from you at fifty?
In his beard the last red glint of sunset ,
face lined from glare and laughing;
he doesn’t jump much now but he would ride again
and dive for anything to make him laugh, dying
to laugh, dying as he hears you tell him
how far the sea is dragging you away, how long
the days must swell between the crest
of one drowning comber and the next,
punch and froth, powerful and powerless
breaking, breaking, slap, embrace,
sharp shoal grinding, breaking.

Upon Letting Her Read
Another of My Love Poems

First her sotto voce “Oh, no!”
while I struggle not to interrupt,
not to blurt, “But wait, wait,
read on to the end!”

then her long silence, the fearsome void
of expression, eyes scanning,
breath held; my overpowering urge to flee
and her . . . embarrassment?
dismay? incomprehension?

until finally, eyes still lowered to the page
and perfect in her silence, she begins
to chew her lower lip and then I know
to reach for her hand—

“Please,” she and a single tear whisper,
“keep writing them.”

And haven’t I just?