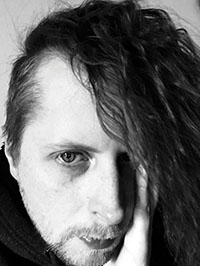 David R. Bublitz is the son of a veteran. He completed an MFA at the Oklahoma City University Red Earth program. He is a 2015 Pangaea Prize finalist, a Naugatuck River Review narrative poetry contest finalist, and a founding editor of Oklahoma City University’s graduate literary magazine, the Red Earth Review. He has published poetry in CONSEQUENCE Magazine; O-Dark-Thirty; f(r)iction; Revise the Psalm: Work Celebrating the Writing of Gwendolyn Books; and Proud to Be: Writing by American Warriors.

In Combat Pay, David Bublitz, son of a career-military father, reveals the trauma of the home front, powerfully representing recurrent loss and the anguish of “hurry up and wait.” With love and honesty, often borrowing from military language, he chronicles how military service invades intimate family spaces where a son is simultaneously “half and arm’s/length” and “1,000 yards” away from his sleeping father. Combat Pay is a bomb to the heart. ~Jeanetta Calhoun Mish, Oklahoma State Poet Laureate, Author of What I Learned at the War

David R. Bublitz’s debut collection, Combat Pay, is a poignant and timely examination of an American family grappling with military life interrupted by war. It interrogates the wars we willingly ignore and the human sacrifices we take for granted. In this searing narrative war comes home in a haunting kaleidoscopic peek into the precarious trauma military families live with alongside snatches of memories and moments lived with soldiers who sometimes don’t make it back home. Bublitz’s poetry memoir goes beyond the headlines. His marksman’s eye takes aim at the heart of the matter, jettisoning us on a profound journey into that which connects us to our humanity. Conflating personal history with political reality, cold reportage with the painful actualities of a world haunted by war, Bublitz’s Combat Pay is about “waiting families rationing hope.” It elevates the parallel lives of those shipped off to foreign sand and soil amid endless war while wives and sons and daughters wait anxiously in the not knowing if a loved one would ever come back home. Combat Pay undeniably and exquisitely captures the sacrifices of soldiers and sons, of wives and lives often upended; it calculates with accuracy and compassion the cost of love and war. ~Tony Medina, author of I Am Alfonso Jones and Thirteen Ways of Looking at a Black Boy

The life of the child of a career soldier is one of pained distance, measured study and buckshot attempts at understanding. David Bublitz has lived and done the work. Bublitz details the pathology of regimented order in maddening chaos in deftly varied textures: solemn grace, stern dignity in service, and profound want and confusion. The blur of “Fieldstrip,” it’s relentless neurosis, it’s precise precision, it’s mechanization of life, is so consuming I was gasping for air by the end of the poem, drowning while learning to swim. …the way what you love becomes/what you hate most about yourself, /the reason why you think twice, /the reason why you fight back/ and the reason why you don’t… These poems are open wounds. ~Quraysh Ali Lansana, author of The Breakbeat Poets: New American Poetry in the Age of Hip Hop & the skin of dreams: new & collected poems, 1995-2018

After Leo Buscaglia, “The Fall of Freddie the Leaf”

he closed his eyes
some people call it to die

surrounded by hundreds
they sat so quietly

and hardly ever moved
near the top of a tall tree.

at dawn the wind came
transformed in a blaze of color

what’s happening? they
asked each other in whispers

torn from their branches–
they fell, others simply let go

tossed about and dropped
lashed back at the wind

carved their names into it
almost as if they were angry

will we all die? freddie asked daniel
who was freddie’s best friend

yes, daniel answered.
we first do our job.

When you hear the air raid warning

support beams shatter splintered
wood and nails through my feet

her torn bra strap loose
limb from her neck