developing the habit of haiku 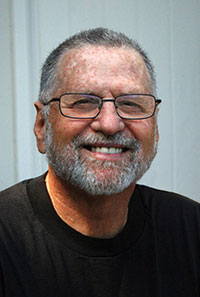 Martin Settle is a poet and assemblage artist, who resides in Charlotte, NC. He has masters degrees in English and Communications and has taught for 32 years, the last 17 of which were at UNC Charlotte. In 2015 Main Street Rag published his book of poetry The Teleology of Dunes. In 2016, Mr. Settle won The Poetry of Courage Award (North Carolina Poetry Society), the Nazim Hikmet Award, and the Griffin-Farlow Haiku Award.

The Habit of Haiku

Why bother developing a habit? Habits have negative connotations and are usually paired with the adjective bad. So we mostly try to rid ourselves of habits, not try to attain one. Haiku, though, is a positive habit, a habit for spiritual and mental health. In the busy swirl of contemporary life, haikus are islands of delight and insight. They were designed for the practical person and require no special room, equipment, clothing, or scheduled time. In fact, we all possess the tools and mental conditions for haiku. Those unfamiliar with haiku lack only the ability to cultivate what has already been planted.

Take this scene as an example:
You are walking from your desk at work or school to use the restroom, and you are fascinated for just a moment by a colleague’s hands flying over the computer keys. Click – you save the image in your mental computer. You have performed the first step of haiku, saving a strong image.

The second step of haiku is to scribble the image down with a short, descriptive phrase. Writing down the phrase can be done when you have a moment to move the image from your mind to paper. In this case, you would write something like “hands flying over the computer keys.” In the course of a day, you will be surprised by the number of images that will capture your attention for a moment. Of course, you don’t have to write a note on all of these, just one or two.

The third step consists of making metaphors and associations. This is done during downtime moments of your day—lunch time, going to and from school or work, a snack break, a breather between projects. These are relaxed moments when you get away from the “directed attention” that we talked about in the introductory essay and reflect on something fascinating. Your images are fascinating, and they require a kind of focused play.

Such as: “Let’s see. What do these hands on the computer keyboard remind me of?” They seem to have a life of their own, like spiders— big, hairy tarantulas. You may think of the curved hands as birds fluttering furiously in front of the screen, or pecking at the keys. This kind of thinking is metaphorical. When you compare hands to birds or spiders, you are making a metaphor.

Food from the crocodile’s teeth

look at the waterfall
and still thirst
_____

old homeless man
in the doorway asleep
mop and pale
_____