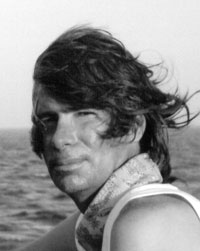 Jay Griswold was born in New Orleans, Louisiana, and has traveled extensively throughout the world. He has a Masters Degreee in Creative Writing from Colorado State University and currently resides in Ft. Myers, Florida. His previous books are Meditations for the Year of the Horse (Leaping Mountain Press) and The Landscape of Exile (West End Press, 1993).

Jay Griswold’s Conquistador is one of the most dynamic and self-assured collections of poetry I have read in several years. The main character’s central voice is reminiscent of Ed Dorn’s “Gunslinger,” but more bloodthirsty and contemporary in tone. He is a true son of Lorca, who understands the black sounds that emanate from an unwavering humanity. These are the deeper songs of the gypsy outlaw, in the tradition of Villon and Genet, whose only salvation is to tell his tale, and tell it straight.The surreal blue notes that inform this journey are pressed between singing knives and the bark of gunplay. Surrrealism is not for the faint-hearted, it requires the courage to experiment, to dig beneath the surface of the world for the unexpected associations that bind us invisibly together. It will be very interesting to see what this remarkable poet does for an encore.

Final Judge and Editor of the Asheville Poetry Review

I don’t like to bore myself
That is why I quit writing poetry
Does any of this remind you of poetry
If so I’ve failed
Because these aren’t poem
They’re heads that rolled from scaffolds
In the Middle Ages
Dark equestrians on the road at nightfall
Paintings it takes a scream to finish
Hand grenades that follow officers into latrines
They are scorpions
On the light switches
Of cheap hotels in the tropics
When you encounter one
Anything can happen.

HOW I FOUGHT THE SEVEN-HEADED BEAST OF CAPITALISM

And so I threw handfuls of rice
At the weddings of friends who would separate
In a few years
I wrote books on the dynamics
Of certain flora and fauna that only exist
Above timberline
I told the story of the ptarmigan that changes its color
I wrote a poem about a rock
Until the words and the rock were one
And I chased the seven-headed beast with a sling
But every time I got close I missed
And my father retired a wealthy man
He still praises the seven-headed beast
That spews its black substance over the landscape
And whose roaring can be heard all the way from Wall Street.

Everything a generation leaves behind
There on the road between Campeche and Villahermosa.