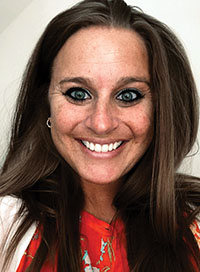 Susan L. Leary’s poetry has been published in such places as Arcturus (Chicago Review of Books), The Christian Century, Whale Road Review, and Pretty Owl Poetry. She has been nominated for both the Pushcart Prize and Best of the Net Anthology and is the author of the chapbook, This Girl, Your Disciple (Finishing Line Press), which was a finalist for The Heartland Review Press Chapbook Prize and a semi-finalist for the Elyse Wolf Prize. She teaches English Composition at the University of Miami in Coral Gables, FL.

“The opposite of anything is the thing itself—“ states the speaker in “A Perfect Animal.” This statement echoes the tensions between subjectivity and objectivity, the sentence and the line, the self and the body, in this complex collection. Through the lens of the body, Leary’s aching poems deftly examine the fierce beauty of survival, love, memory, and all that will not be held, except in astonishment. ~Chelsea Dingman

Contraband Paradise is an astonishment, a book that invites us to look, then look again, and see the luminous in the harrowing. “Are you surprised, then, when I tell you joy is only sadness from the outside looking in?” Leary asks, and like this and in other ways, her words reposition us, awaken and disorient us, gently, with humor and love. Oh, the love in these poems, tender, difficult, attentive, necessary—to counter the body’s perverse autonomies and limitations, to ameliorate pain, to mine joy. ~Melissa Ostrom

In Susan L. Leary’s Contraband Paradise, “even dust has a / capacity for gleaming.” Informed by the poet’s clear eye, exquisite ear, and evident faith, these poems reveal “the sky joyed with its own steadied abundance” even as they confront the need to “part & parcel our complicated selves” when “each day is a crash course in survival.” To read these gorgeous poems is to be gratefully persuaded that “the opposite of cursed is to live.” ~Susan Lewis, author of Zoom and editor of Posit

The doctor says 60 degrees, but at the right angle, it is possible for a woman to dream ability to rebuild a man’s body. To imagine his deformities to be less rare & more God-like. More exquisitely hallowed-out. The precise geometries of a curved spine but the wrecked bones of Adam restored in their digging-up & returned to a contraband paradise. Where measure for measure, there exists opportunity to distinguish between punished & progressed. My husband’s ribs a now distorted spell, where electromagnetic waves capture not an eternal glitch but the ghost of a cottonmouth uncoiling in its slow exit from the reeded underbelly of a wet earth. Such that we will come to know a condition in which we seek to alter nothing. In which we see the marvelous clairvoyance of a body that believes in its own ability to live.

It’s mythic, the way the body knows to antagonize itself
so suffering is hardwired into the DNA: swollen ankles,
stiff leg, thick heart, the blood that will refuse to draw.
Freud agrees only the Irish are impervious to psychoanalysis,
at least according to Matt Damon in The Departed.
It’s true, after a long day, we would rather sit at home
in silence in our own chairs, feet up, across from no one
except those who love us dearly. & in a grand irony, we will
drink beer & avoid sugar in our coffee. Because test results
yield nothing more than arbitrary choices. It’s to make
no difference, then, that my great-grandfather, wordless
about the black flesh that ran from his knee to his foot,
would set his house on fire & dwell acceptingly in its ash.
Or that his son would speak nothing of the cancer, but would
let the bones rot before they made it to the soil, even lose
a kidney unnecessarily. Yet throughout history, the Irish
will continue to lay tracks, & the iron will continue to brittle,
& embolden, the human joints. Even in astrology, there are
four fixed stars for suffering: 22 degrees Pisces, 25 degrees
Sagittarius, 0 degrees Virgo, 9 degrees Aquarius. My father,
bless him, his planets are ruled by them all. Then again, bless
all my family’s men in undershirts who will rise in the morning
& live out their days on high beams for Rockefeller: steady,
upright, though everything wrong. So when the doctor says
C282Y, already I understand. The split heels? The band
of pain that wraps around my back? That band, it moves
deep into previous generations. & for the rest of my life,
these words, this diagnosis, will be the closest thing I have
to call honor.

In the dream, God said there would be a door. Behind the door, a world & behind the world, a body. It is expected each of us will have the same dream, & so at first, I cannot know which body, which world is mine. Further, in each body, there is to be a secret. In some secrets, misery & in some secrets, miracle. I want only to know the miracle. I want to bear whatever is to be beared until it may be so. To which God replied, when the miracle is learned, it is then that I will wake—& when I wake, I will know love. For the first time, an occasion of a world in which the blessed idea of me, already dreamt.

Behold in the white light of noon,
a gathering of pink-tinted peonies flowering at the desk,

each colossal head rounding itself,
sweetly, into the bomb-shape of an heirloom.

The blooms as beautiful as expected, effusive of cold
cream & the fresh scent of rose oil.

Our bodies, on the other hand, resist such imagery.
They are not so beautiful.

Even in the glass, the lemon-green stalks are given chance
to bare an intricate architecture, a crisp sheen.

Though we are more misguided, more housefly
landed on the sill in perpetual want of a vaster hour.

to be generous? After lunch, the furthermost petals
will begin their softening back,

the remaining tufts of bloom feathering out
into a single orb, blithesome & occupied with living.

What we would give to be this immense
& unrefraining? To welcome the body with the mildness

we do a single flourish, trusting it to camber
into the entirety of our hands, saying:

Touch me.
I ask nothing of you in return.