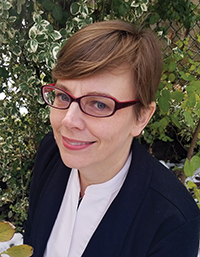 Ann E. Wallace, PhD, was raised in a small coastal town in Massachusetts but has lived in Jersey City, NJ for many years. As a long-time survivor of ovarian cancer and as a woman with multiple sclerosis, she reflects on the embodied experience of illness and trauma through poetry and prose, as well as in her scholarship. Her creative work has appeared in Wordgathering, Juniper, Literary Nest, The Capra Review, Snapdragon, and other journals. She is an English professor at New Jersey City University, and her work can be found online at AnnWallacePhD.com.

Wallace’s great feat in this book of poems about both her life-threatening illnesses and our persistent national injustices is to leave readers with a sense of hope. In an unsparing conversational style that eschews metaphor, she pulls this off with tales of resilient lives, highlighting girlhood: her own, her mother’s, and her daughters’. Life is lived deliberately in an imperfect country, with other people, and against all odds. ~E. Shaskan Bumas, author of the Grace Paley Award winning book The Price of Tea in China

Counting by Sevens is about how we make sense of our wounds. Wallace takes us through the national injuries inflicted by injustice, the damage done to us in relationships, and finally to the betrayal of our bodies in illness. She moves from national injury to the increasingly intimate, cellular level of our bodies, and in clear-eyed, unsentimental poetry, brings readers to their knees, showing that bearing witness to suffering is a form of healing. ~N. West Moss, author of The Subway Stops at Bryant Park (Leapfrog Press, 2017)

The classroom door has a window,
my daughter told me in the fall,
though it feels like
it was yesterday,
and the walls do not meet
the ceiling, so we were lucky
that the threat was in
the other building.

I have a favorite classroom,
with a solid door, and no windows,
like a dungeon, my friend posted
today in response to a query
about how to keep safe
at work, on another day,
like every day, when
these questions matter.

On one of those days,
a man stands agitated,
outside another school,
studying each person
who enters, pulling one
aside to ask questions.
The principal watches him
through her window, calls
the police. It doesn’t matter why
he is angry, but it does matter
that he is angry
at someone
inside the building.

My younger daughter
didn’t receive any flowers
at school this Valentine’s,
but she was in a good mood
and her friends plucked
the blossoms from theirs
and gave her the barren stems,
which she gathered
into a twiggy bouquet.
She has a sense
of humor, so she posted
a picture and laughed
at her good fortune.

That evening I bought
a set of ramekins and
made molten chocolate
cakes, but I forgot
to set the timer and they baked
just a little too long.
We ate them together, watching
U.S. skaters spin on the ice
half a world away,
and read the news
about Florida.

In culinary arts, at my daughter’s
high school, the room is open
to the lunchroom, and
the teacher had told the class
just thirty minutes before
on that September day
that they could hide
in the storage room,
with the food,
if there ever were a threat.
But, he said, there never
has been
a threat.

That was the day the alarm rang,
and it was eighth period,
not seventh,
so my daughter was
in the other building with the door
that you can see through.
She came home that afternoon
to tell me the story.

And this time, on Valentine’s day,
I was not worried because
she was at school making crepes,
and her sister was laughing
about carnations,
and the man on the corner
was gone.

But this is another day
in America, and the gunshots,
and the whimpers
and the wails, though
today they are not here,
they do not stop,
and the sounds of terror
reverberate for miles and miles
off the red and pink balloons
in the shape of hearts
that float from the school halls
above the bodies
of Parkland’s children.

The Weight of the Numbers

800,000 children and adults marching for our lives
is overwhelming, unimaginable
but seventeen dead in 6 minutes and 20 seconds
is suffocating, incomprehensible,
a grief that challenges us to wade into it.

But those numbers take our breath away
when we feel the shaking ground of Washington
reverberate in the heart heavy footsteps of New York,
Chicago, LA, Boston and along thousands
of other beaten paths,

when the firm and weeping silence of Emma Gonzalez
echoes in the voices heard and unheard, of students
like her, or not, at podiums, holding microphones
and bullhorns, or not, for the first time,

when 7,000 unique pairs of shoes laid out on the lawn of the Capitol
by countless volunteers working from dawn to the final bell
signal the horror of nearly six years of children
we were willing to lose since twenty and six
murdered made us promise, no more.

A mother orca mourns
her newborn calf for sixteen
days, the two buoyed together
for hundreds of miles, encircled
by their familial pod.

We marvel at her grief, so
human, at the compassion of killer
whales who keep her close, safe,
share the weight of her grief
and listen to her cry.

A mother from El Salvador mourns
her lost child for weeks unending,
her toddler taken, withheld, misplaced,
she swims alone, amid the lost mothers,
in their pod of manmade grief.

We scorn her despair, her choice so
inhuman, of bringing babe from hostile
land, bound together for hundreds
of miles in search of freedom, life, safety,
and we will not hear her cry.