For those who prefer to pay by check, the price is $21/book (which includes shipping and applicable sales tax) and should be sent to: 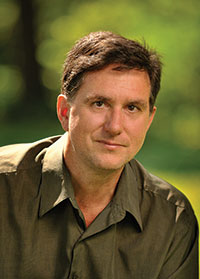 Scott Owens holds degrees from Ohio University, UNC Charlotte, and UNC Greensboro. He is Professor of Poetry at Lenoir Rhyne University, former editor of Wild Goose Poetry Review and Southern Poetry Review. He owns and operates Taste Full Beans Coffeehouse and Gallery and coordinates Poetry Hickory. He is the author of 15 collections of poetry and recipient of awards from the Academy of American Poets, the Pushcart Prize Anthology, the Next Generation/Indie Lit Awards, the NC Writers Network, the NC Poetry Society, and the Poetry Society of SC. He has been featured on The Writer’s Almanac 7 times, and his articles about poetry have been featured frequently in Poet’s Market.

In Counting the Ways, Scott Owens gives his readers a splendid and deeply moving exploration of both his own vision and the versatility of language. That this pairing is couched in the word and concept of ‘thirteen’ is neither accident or mistake, but a rich and rewarding voyage through language, symbol, darkness, and light delivered by a talented, versatile hand—and of course— the poet’s incomparable eye. ~Phebe Davidson

Counting the Ways is an invitation to witness the beauty of vulnerability. This collection of poetry is compelling with metaphors that accentuate the emotions of the poems. Insightful and heartfelt, Scott Owen’s poetry gathers the erasure and keeping of memory. These poetics are searing and tender all at once. There is story inside of each punctuated line and breath that holds, shreds, and reimagines the landscape of sacrifice, rebirth, and truth-telling. Counting the Ways takes action in transformative language. It speaks complicated, multi-faceted truth. It opposes silence and silencing. Scott Owens is a poet, to paraphrase Yeats “who can hold reality and justice in a single thought.” ~Jaki Shelton Green, NC State Poet Laureate

One of the dearest characteristics for a poet is to constantly become more adept as a maker, more expansive, widening your lens to include a greater circumference of material and witness. Scott Owens’ poetry has continued to deepen, as he uses the redemptive force of his imagination to salve the cracks in his relationships to his family, his father, his art, and his community, using Wallace Stevens’ “Thirteen Ways of Looking at a Blackbird” as his point of reference. Bob Dylan decried the ways that “everything’s broken,” and Owens uses the broken pieces of his life to form complex pleasures, weaving taut stanzas and threads of lines to rescue golden ratios from the shards, “a black magic of breaking” learned from generations of men breaking out of their boxes, their bodies, their temporary homes’ bold restraints and broken expectations. “Poetry is all about the riprap of things,” Owens writes, and from the scree and barbaric glass of his life, he has built his best book yet. ~Keith Flynn, author of The Skin of Meaning and
editor of The Asheville Poetry Review

There were always bottles in the well house,
lined up on 2 X 4s, piled in boxes, hidden
above the door. He hung them, bottoms up,
on the sticks he planted in the pasture.
Sometimes he used coffee cans, milk jugs,
a red-lined slopjar, anything to make a noise
as it swallowed the rocks or took the blows
hard against its side. But nothing could match
the sounds of shattered glass, nothing
could match the thrill of breaking.

The changes came sudden but incomplete.
What was once a bottle grew into
the many faces of breaking,
mirrors and windows, stung
running of cows, frantic beating
of redbirds, cries of children.

His father went off to war
to practice breaking on other men.
He became so good at it he came back
to teach others the black magic of breaking.

His mother stayed home and broke water,
broke in husbands and children,
broke her back to hold
some fragment of family together.

The old man, his grandfather,
broke the earth, broke cows
in the pasture, chicken-bones
in his teeth, taught him to break
limbs with the red axe,
the necks of chickens and rabbits,
legs of owls in foxtraps,
skulls of cows in the stable.

He saw the breaking of land,
the endless bending of backs
and knees, the big-handed breaking
of his mother’s face, his brother’s
mouth, his own shattered skin.

He heard the news of breaking,
of Attica and Kent, King
and My Lai, the fields and jungles
scattered with war, the streets
emptied through breaking of walls
and windows, hearts and heads.

He saw the night shattered
with noise and lights, a man’s body
broken open on the porch,
the life splattered on the window,
lying messy on the floor.

He wanted to leave it all
behind, to break the habits
of breaking, but even now,
he knows the hearts of those
he loves like glass.

1
13 was my mother’s age when she married,
the number of divorces my parents had,
the siblings they gave me, full and half
and step, most I never knew.

2
By the age of 8, I’d lived
in 13 different houses
in the same small town:
mill homes in Grendel and Matthews,
country shacks in Cokesbury and Stony Point,
rundown rentals on Cambridge and Main,
cheap apartments called Grace and Northside.
Most of them were green,
most near the tracks.
None of them kept us long.

3
There were 13 acres of pine trees
behind my grandfather’s house,
2 creeks, deer, raccoon, fox,
enough room to go wild in,
more than enough
for imagination to take hold.

7
Who knew the 13th guest at the table
held death on the tip of his tongue?

9
Just because the number is left off
the elevator buttons doesn’t mean
there is not a 13th floor.

11
On the 13th day they
walk out of their homes,
toss aside ill-intent,
play jokes, laugh, pray for rain.

12
13 raised to the power
of 13 is superstition incarnate,
the secret name of God.

1
God had nothing better to do.

2
He couldn’t stand how messy it was.

3
It all seemed one interminable run on.

4
Given the amount of stuff there was,
it was bound to happen somewhere.
The only law was the law of averages.

5
Who could resist the chance
to make something as beautiful
as the Blue Ridge in October
or the water off Longboat Key?

6
If Freud had been there,
he would have told him he had to,
that it was wired into him
as much as breathing or writing,
as curiosity or
giving in to temptation
and tasting the fruit.

7
Who would waste
the opportunity to know
Whitman, Michelangelo,
Georgia O’Keefe?

8
The inevitable attraction
of celestial bodies.
9
Knowing what he did
of existence, how could he not
give others the chance to live
at least once?

10
There was too much of him
to contain in a single body.

11
What would you do
in a workshop
of infinite possibility
where even a moment’s
imagination could spring to life?

12
They were wrong
who wrote things down,
division, judgment, order.
Only in his image,
ever expanding outward.

13
It simply had to be shared.

5 A.M.
The baby toddles into our room,
climbs from the bottom up,
quietly, thinking she is undetected.
I roll over, smell her morning breath,
pull it in, happy for one more.

6 A.M.
Crepuscular,
her first 4-syllable word,
favorite time of day,
dusk and dawn,
border time,
when of in-between,
neither night nor day,
asleep or awake,
magic time of becoming.

10 A.M.
At home I think about work.
At work I think about home.
Obsessive to a fault,
duality is difficult,
constant disruption of joy.

Noon
My half day over.
The classes end.
Head heavy,
I follow habit home,
await your arrival,
little child, so full
of becoming, sudden joy
springs from my eyes.

2 P.M.
This is the time of play,
sandbox and slides, swings
and swords, tea parties and house,
mastering manipulation of toys
and friends, making rules,
changing them, creating
order from chaos
and constant negotiation.

4 P.M.
Transitions they say
are always the most difficult
and the most important,
moving from outside
to inside, fun to family,
settling into evening’s routine
of cleaning and meals
and memories created and shared.

5 P.M.
Simply the worst time of day,
misnamed happy hour.
The time they always lost Jesus,
and I struggle to keep it myself.
True hump of the day
when one more noise,
one more necessary task
pushes me toward the edge.

7 P.M.
I no longer bathe with you.
No Gary Snyder, I grow self-conscious
as you fixate on differences,
but I still hold on to this time
of washing things away,
exploring the day’s consequence,
quietly searching for scrapes or bruises,
any blemish in unspeakable perfection.

8 P.M.
Story time.
We settle down by opening up
possibilities, play without toys
but only imagination, worlds
where almost anything can happen,
flights of fancy, courage of quests,
even the love of parents focused only on us.

11 P.M.
Sum of all hours.
This late we’ve had to wait
for time alone, children finally
asleep, little left
but familiar words of comfort:
did, will do, tomorrow

Midnight
Witching hour,
time of turning,
I rise from the desk,
wander to every bedroom door,
reassured to see
that nothing here has changed.

3 A.M.
Not sleeping,
trying to write,
lines twist and turn,
refusing to settle in,
sweating it seems,
maybe moaning against
unwanted weight of worry.