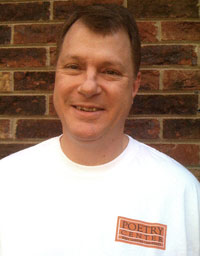 Robert Abbate teaches English composition and philosophy at Rowan-Cabarrus Community College in Concord, North Carolina. His most significant recognition in poetry came in 1982 when Carolyn Kizer selected five poems for the Katey Lehman Creative Writing Awards at Penn State University. His poems have appeared in such journals as Alehouse, Ruah, Sanskrit, Iodine Poetry Journal, The Main Street Rag, and Kakalak: An Anthology of Carolina Poets. He was one of the founding editors for Ruah in 1990, a poetry journal of spirituality at the Graduate Theological Union in Berkeley, California. His first full-length poetry manuscript was a finalist for the Bright Hill Press Poetry Book Contest in 2005 and a finalist for the John Ciardi Poetry Prize from BkMk Press in 2006. Robert’s poem “Tishbite Pottery Fragments” was a finalist for the 2007 James Hearst Poetry Award from the North American Review.

In Courage of Straw Robert Abbate addresses forthrightly and steadily difficult issues of religious faith and personal relationships. From these materials he has drawn a fine-tuned formal music that sounds in the heart as resonantly as it sound to the ear. His formidable skills are always in the service of genuine feeling and rigorous thought-and of pleasure. A wonderful collection!

Laced with allusions to Dante’s Inferno, Abbate’s collection presents a gallery of souls trapped in living hells: Matthew Shepard getting tortured and pistol-whipped, Giordano Bruno burning at the stake, three young brothers being immolated by a terrorist’s Molotov cocktail, Theodore Roethke undergoing electroshock, an Irish hunger striker experiencing the agonies of starvation. At home with these more modern poems are others that retell Biblical stories with similar themes of violence and vengeance. In Robert Abbate’s world, redemption arises not from symbolic ritual acts, but from the donation of a kidney by one human being to another, a gift of the sword and of blood. Yet it is also a world that never loses faith in the power of language to bear witness.

Though stark in its revelations of abuses afflicted upon the young, the saints and martyrs, Courage of Straw presents a tenderness woven with the strength of the heart’s affections and the mind’s brooding analysis. This collection is a scholarly forage for scraps of meaning, for grounding. Amid “fear and trembling,” Abbate makes difficult choices. At times as delicate as a strand of hair, his poems wrestle with angels!

The detention minister could see the gray fortress
to the left side of the freeway after crossing
the Bay Bridge. Like an industrial incinerator
without a smokestack, the Hall of Justice reveals slits
instead of windows on its top two floors. The Capuchin
friar ascends this mountain’s eight storey purgatory,
the despair and rage in temporalis made tangible
in the concrete floors, the steel bars and open toilet stalls.
Most of the cells have mattresses on the floor
to accommodate the overflowing population
who wait lethargically for court in bright orange jump
suits, except those clad in red, the violent offenders.

The chaplain carries a surplus gas mask bag filled with prayer
supplies, Bible, Rite of Penance, holy cards. His presence
soothes like a draft, the county jail swelters like
a sauna, the smell of sweat commingles with the pungency
of hair gel. He walks the line of the cellblock wearing
a brown robe habit, knotted rope belt, sandaled feet. He hands
out the plastic rosaries to the eager prisoners
who wear them around their necks like talismans.

On Sundays, the prayer service always ends with sobbing
choruses of Peace is Flowing Like a River, and all
the verses of Amazing Grace; every published and
improvised version lets the wraiths linger on the porch
beyond the tomb of lock-down.

After the recessional hymns, the specters file back
to their cells to be cloistered again from society,
their Divine Office a Litany of the Penal Code.
Brother Quaestor can leave at the end of the day,
carrying the soul-damaged testimonies, the bitter
stories like a bundle of bruised reeds.

The Franciscan dreams the incarcerated rise up like
incense from the depths, redeemed from the paper mill
that pulverizes to pulp and strings dripping wet leaves
of paper out to dry under a scorching sky,
pages of Miserere flapping in the vindictive wind.
He prays the God of all mercies may cleanse the ink-stained faults,
while justice does not blot out the indelible crimes.

Gripped by wrestling season, I would wake to run at dawn
through a sleeping neighborhood. The frosty smoke billowed
from my heaving lungs. I would meditate on my match,
as I bounded along the ice-patched pavement,
ready like Jacob to prevail. Only champions
drag themselves from bed to leap awake.
My flesh knotted briskly, I loved the sweat and stench,
the strain of muscles. My fists clenched and my feet pounded
the last mile’s hammer. I would crush any
opponent, whether man or angel, to bounce the foe
onto the mat. Then I would grapple through the final sprint,
and my ego would pop out of socket. What if I lost? Would I
writhe all night with the countless ifs? If only I had torn
his tendons, bruised his ribs, bent his shoulder blades flat.
If only I could forget, let my injury heal. I would limp
to the shower with my blessed doubt.

What would Jesus do,
once he could be lured
to the place of the fractured,
pistol-whipped skull,
and once, in the freezing air,
he could be lashed to a barbed
wire fence outside Laramie?

This Passion play twists
with a Queer catharsis:
the Gay Shepard boy
pleads for his life,
and executioners pound
his marred head beyond
any human semblance.

The religiously
intolerant would not see
the Crucified in disguise.
They would not hear
the gentle spirit’s refrain:
Forgive them even when
they know fully what they do.