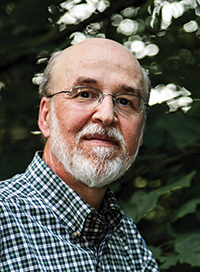 Bill Griffin has been a small town family doctor in rural North Carolina since 1981, where he finds his daily calling as he strives to discern meaning in people’s personal stories. This collection arises from those years and those efforts. His poems have appeared in regional and national literary journals as well as The Journal of the American Medical Association. He has had four chapbooks published: Barb Quill Down (Pudding House, 2004); Changing Woman (Main Street Rag, 2006); little mouse (Main Street Rag, 2011); and Snake Den Ridge, a Bestiary (March Street Press, 2008), set in Great Smoky Mountains National Park with illustrations and historical preface by Linda French Griffin. Bill promotes the work of North Carolina poets at his blog GriffinPoetry.com.

One of the nobler functions of poetry is to locate meaning and the luminous in ordinary experience. Bill Griffin’s narrative poems—about examining patients, farm life, a supermarket bagger, a grandmother’s kitchen, Pilot Mountain, apple picking, and a Great Blue Heron that “pins me to the day”—do this admirably. Readers will not easily forget scenes taken from the daily and shaped into poems of strength and compassion. Crossing the River is rewarding book. —Peter Makuck author of Long Lens: New and Selected Poems

Griffin’s new collection opens masterfully with these lines from the first poem Care, “She opens the jeweled box of care / and unfolds first one / then another…,” as does the reader with this book, unfolding these pages and the thoughtful poetry contained within. These well-crafted poems are lyrical, rich with imagery and in some way are all connected to nature, to the earth. I find this collection spiritual, even magical. Bill Griffin writes with both clarity and depth, capturing the reader’s imagination, while subtly exploring the human condition. A beautiful book of poetry. ~Jonathan K. Rice

In Crossing the River, Bill Griffin preserves the humble people and places of North Carolina, carefully recording where past and present intersect. Like a plein air artist who must capture a natural scene and movement before the light fades, Griffin anchors his poems in the real world of the grocery store, kitchen table, and doctor’s office where his words paint images and portraits of aging, family bonds, and grief. Griffin, a family doctor and geriatrician, sometimes turns the mirror on himself: “what does this river care who crosses or how long? / Almost forty years for me. / It never stops learning. / I’ll take a lesson.” This is a deeply personal collection that ponders the truth of human choices.—Alice Osborn, author of Heroes without Capes

Rain on the fresh-turned furrow,
an angular chip of flint upheld
in the wash of red clay:

cutting edge, notched for a shaft,
crafted by an ancient hand and handed
by the harrow to the rain.

Tool, relic, a treasure to discover before
seeds are set, green shoots rise,
and the child’s hand reaches out

for the golden fruit or the gray stone –
do we look ahead or back over our shoulder
to know if we have plowed straight?

That spring the headlines grieved:
Lindbergh’s Baby Kidnapped,
a mourning cloak that settled heavy
across the shoulders of every neighborhood.
Our sky lowered itself to rebuke
tulips and hyacinths, to renounce
all green, all color,
and the late snow drifted lawns
like an infant’s down bunting.

Why should I have expected my daughter
to contain her four-year old squeals
at the hills’ white-lofted magic?
The sled dragged forth, her pink knit cap,
the azalea’s pink hope smothered
and struggling like the fists of babies;
our flowered Easter frocks
smothered under damp black wool,
the opened tomb no consolation
for a son’s shallow grave.

But my child lived – you are here, Great-grandson –
and I turn these clippings over to you,
but can I turn over all my grief? Remember
that the thousands you can’t conceive
are born as ones – just one
stolen through a nursery window,
beneath a wave, before
the black mouth of a soldier’s barrel,
and every mother knows
the loss of every child.

Winter is a broad-winged hawk gliding south –
from this stark knob we spot her approach,
banking to join the far spiral kettle
and cast a frail shadow over one point of landscape
as if time has circled and stopped.

We might imagine summer will linger:
leave our jackets at the trail head,
let the south-dipping sun limber tired joints once more
and believe that our hawk will rise and rise,
but she wheels one last turn in her invisible draft
and veers southward, always south.

We turn to track her, and on our necks
the twilight chill reminds us
tomorrow’s winter will arrive as certainly
as the last fledgling leaving the nest;
but on one clear day before the season’s change
the mist dispels, our horizon sharpens
and we recognize the path we have taken
to reach this summit.

The hawk glides near . . . recedes . . . is finally lost
across the blue ridge – we see only dimly
the course she will follow into shrinking days
while here with us whispers
a premonition of snow.