Daughter of the Ardennes Forest

***This title was selected for publication as a result of finishing as a finalist in the 2006 MSR Chapbook Contest.*** 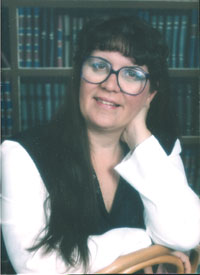 Carol W. Bachofner is a mid-life poet who has been writing professionally for the past several years after years away to raise a family, and midwife other people’s babies (That process is quite a bit like writing poems!). She received her MFA in Poetry from Vermont College and up til recently has been teaching college English. Carol resides in Rockland, Maine where she plans on opening a small private writing school and a writers’ retreat beginning in early 2008.

In deep Ardennes snow, with an idea
of a better future, growing boys
in men’s uniforms waged war.
No games in the backyard, no plastic
army men; this was the real McCoy

War is a bet on the margin
no guarantee of a big payoff, a win
not always a win. When the call comes
the wagers are placed, the ante
always bigger than expected.

So it was for us, not yet born
when our fathers marched off to war.
The margin bet has been called:
time to pay up, or to collect the prize.
For some, the usurer knocks at the door.

Watching Myself :
Thinking of You 1943

for my parents
The rail station is almost unchanged
since you stood here,
arms around her, face in her neck
for one more deep breath
of Evening in Paris.

I think of champagne,
and peaches wrapped
in pale white paper, orange-red
suns of sweet icy fruit, your last
meal together before the train.

You heard the conductor sing
your departure, his call
freezing the two of you to the platform.
In the grime of slow-moving glass,
she watched herself begin to miss you,
hating the clock that called
you to the station.

I watch myself in the glass
of the train that passes, tick
off your last day together,
thinking of you in 1943
so young and so caught up
in love and in duty.

We Blame Our Dysfunction on Hitler

My sister chain smokes, blames
our parents
or her unhappy childhood.

I marry the wrong man,
a military man who cheats on me,
beats down my self-esteem,
says he hates me, and blames me
for getting myself pregnant.

Back in the hospital,
trying to smoke out her depression,
my sister coughs up
a new idea
suggested by Dr. Whoever:
Blame your dysfunction on Hitler.

Well, you can stop smoking, Diane.
I’ve gotten my life back,
and Hitler is rotting in the grave.
We can blame him and forgive
Daddy for using the gun belt
to spank us, for sending us to bed
without supper
like the nights in the POW camp
when he went to sleep without a crust
of black bread in his belly.

We can blame Hitler
for our dysfunction
and take Daddy off the hook
for some parts of childhood
we’d just as soon forget.