Deliver Us from Weasels

Essays and Musings by

Charlotte’s Voice of Alternative Journalism for Over 20 Years 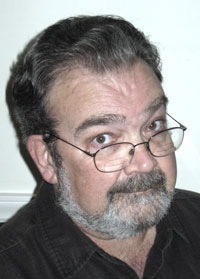 John Grooms is a multiple award-winning writer and editor, as well as teacher, public speaker, event organizer, music lover, rock history fanatic, husband, father, recovering worrywart, conflicted Catholic, pastry hound and incurable smartass. He has lived in Charlotte since 1976, was editor of Creative Loafing in Charlotte from 1988 until 2005, and has been a featured columnist for the newspaper since then. During his tenure at CL, the newspaper won more than 40 state, regional and national journalism awards. Grooms is the “tragicomic product” of a bilingual postwar home in a small South Carolina town, interspersed with spurts of living in Brussels, Belgium. He?s overweight, often profane, has been called a “progressive populist” among other, worse names, and on most days would rather be at the beach.

Tommy Tomlinson, award-winning columnist for The Charlotte Observer:
Grooms can write — you can enjoy these pieces just for the language — but he never stops there; he leaves you with something to think about every time. It’s like having supper with a friend and coming home to find an extra twenty in your pocket.

Hal Crowther, H.L. Mencken Award-winning essayist, and author of Gather At The River and Cathedrals of Kudzu:
Raised in Gaffney, S.C, John Grooms grew up to become one of those wise and generous observers whose wry native take on Southernness is our best answer to Yankee condescension and stereotyping. My admiration for Grooms, long Charlotte’s lonely voice of reason, has nothing to do with the fact that I almost always agree with him. From Elvis to James Brown, from losing Jesse Helms to legalizing marijuana, these essays are deeply felt and often personal, but never indiscreet. They map a personal journey; they also paint a convincing portrait of all of us, his aging contemporaries, as we were and as we are.

Judy Goldman, author of Early Leaving:
For years John Grooms was the conscience of the Queen City. Now we’re lucky to have his essays in a book that we can read and reread, consider, contemplate, and learn from. His point of view is always complex and fully realized, and he cuts right to the heart. This book is starkly funny, playful, smart — and above all, compassionate. I want to put it in the hands of everyone I know.

Ann Wicker, editor, Making Notes: Music of the Carolinas:
In his career as a writer and editor, John Grooms hasn’t been afraid to plunge in where other writers may fear to tread. Whether he is skewering a dumb move by local politicians or penning a thoughtful look at the career of someone like singer Dusty Springfield, he makes you laugh, cry and think, sometimes in the same sentence.

George W. Bush, former U.S. President:
John Grooms is an erudite gentleman whose insights and sparkling wit have provided me with many an evening of delightful reading. In other words, he makes ya think — but not too hard. I like that.

Now and again, as part of the Boomer With Attitude (BWA) column, I answered questions from readers—and I made up some questions I wish I had gotten from them. All in the interest of fine alternative journalism, of course. If memory serves me, all the questions in this particular column came from yours truly.

Welcome to another installment of “Ask BWA.” Thanks for sending in questions, so I don’t have to go on making all of them up. Now I only make up some of them. Feel free to e-mail me your tongue-in-cheek questions about whatever issues are puzzling you. Now, let’s get on with the wisdom.

Dear BWA: My wife Jenny and I are having a big fight. We both think Wachovia exec Wallace Malone’s $134 million retirement package is obscene, even if he plans to set up a big charity with some of the loot. I say his “golden parachute” should be taken back and split among the 4,800 people who were fired when he merged SouthTrust with Wachovia. Jenny, on the other hand, says he should be roasted on a spit and fed to wild animals. We’re hardly talking to each other over this; can you help save our marriage? — P.O.’d Populist
Dear P.O.’d: Why are you fighting? You guys have come up with two great ideas — why not do both? Then celebrate your social conscience and imagination with a romantic night on the town. Hope this helps!

Dear BWA: I was in SouthPark Mall the other day and saw some teenagers walking around wearing what looked like old black drapes and combat boots. No stripes, no sleek polos, and not a monogram in sight — and most of them had <nose rings>! Am I crazy or isn’t SouthPark supposed to be a haven from, uh, that kind of thing? I was thoroughly grossed out — and a little bit scared. — Misty Barrington
Dear Misty: Relax. What you saw were probably a group of “mall goths.” They prefer dark clothing and yes, often have piercings in various body parts, but are usually harmless. In fact, they were probably as scared of you as you were of them, especially if you were wearing a monogrammed polo. It’s true that SouthPark is usually a preppy refuge, but it’s probably not enforceable by law. The next time your whitebread shopping experience is violated, just grit your teeth, look the other way until the aliens have moved on, and tell yourself, “I’m OK, I’m rich, there may be weirdos around, but the mall is still my oyster.”

Dear BWA: Will lower ticket prices attract more fans to Bobcats games next season? – Moore For Less
Dear Moore: What if the following happened? You drive to a new restaurant where you’re expected to tip the traffic officer and spend a fortune on a parking space. After you’re finally served a meal, it turns out the food is terrible and the prices are sky-high. The restaurant starts losing customers, so the owner, after hearing many complaints, announces he has taken care of the problem: he’s cutting his prices. Would you go back?

Dear BWA: How is the Marie G. Davis “military school” concept going to work? My son is a total hellion and I’m thinking of sending him there to shape him up. — Desperate Dad
Dear Desperate: The military magnet school, touted as a way to improve discipline at the troubled middle school, would use the US military as a template for “character education.” Details are sketchy, but I assume this means female students would be sexually harassed 24/7; school administrators would “look the other way” when students use torture during academic and athletic competitions with other schools; and low enrollment would probably result in National Guard units being called up to fill classroom seats. On the plus side, fewer students would go home hungry, since the military MRE’s (Meals, Ready-to-Eat) are a big improvement over traditional school cafeteria food.

Dear BWA: Why don’t you run something in your column like the Charlotte Observer’s limerick contest? — Wordsmith
Dear Wordy: We would never want to imitate the daily paper, but since you brought it up, here’s a limerick I penned especially for the Big O’s contest.

In publishers’ offices lamplit,
Knight Ridder presented its gambit.
Said an editor wag,
“’F we keep shrinking this rag,
We may as well call it a pamphlet.”

Dear BWA: I moved to Fort Mill to get away from high taxes and liberal schoolteachers. Now that the South Carolina Education Oversight committee has voted to make it easier to teach intelligent design as an alternative to evolution, should I laugh at my former Charlotte neighbors? — Not Monkeying Around
Dear Not Monkeying: I would wait awhile before laughing too much. The committee’s recommendations still need to be approved by other hicks-in-suits, and your kids could wind up being exposed to modern ideas whether you like it or not. In any case, laughter over education issues seems unwarranted in a state where schoolkids would actually be better off if unevolved apes ran the government.