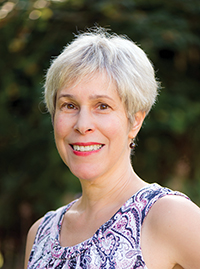 Ruth Bardon grew up in Highland Park, New Jersey, and lived in a number of midwestern cities before firmly settling in Durham, North Carolina. She received an MFA degree from the Iowa Writers’ Workshop in 1982 and a PhD in English from the University of North Carolina at Chapel Hill in 1995. Her poems have appeared in journals including Boulevard, the Cincinnati Review, the Comstock Review, the Saranac Review, and New Ohio Review. This is her first chapbook.

Ruth Bardon writes, “This is the realm of foxhole prayers and magic.” And it is. Her poems are glimpses into the extraordinary life behind our daily joys and sorrow. She talks about what we all know, somewhere behind what we admit. Take a good look! ~Betsy Anderson, poet and Managing Editor, The Comstock Review

Demon Barber wonderfully explores ‘this consolation prize, all of it,’ by which Ruth Bardon means life, all of it, the grace notes we celebrate, the absences that make those celebrations ache. And in this extended elegy, Bardon captures—skillfully—the voices of a party still going strong as well as the plaintive calls of those who’ve left early. Here is a poet, versed in loss, who gives us vivid scenes of complex consolation, prizes to cherish.  ~-David Wanczyk, editor New Ohio Review

This poetry glides between worlds of memory, here and now, and the ethereal. Between the reality of daily lives that must be lived and memories that retain their own secret lives within us. Bardon deftly captures past identities, reveals secrets no longer needing to be kept, erases lines to connect our diminutive existence with something larger. These poems balance in a space between, allowing readers moments of omniscience, validating our own precarious identity in life.  ~Denise Hill, Editor, New Pages

Bardon’s poems seem to wonder how far inside of thinking they can go. Her mind works like porcelain, reflections separated from what’s real, echoes estranged from their source. Here you will find something always “swimming just below the surface.” Not afraid of strangeness, she exploits it in her cityscape of contemplation. I commend this memorable, unusual, intimate collection. ~Peggy Miller, Editor, Comstock Review

When we turned on the tv in the motel room,
Angela Lansbury was kicking her heels,
flirting, and singing “By the Sea”

with such giddy optimism
that the two of us simply stood there,
holding hands and watching.

but what stayed with us
was the feeling of being tossed in the air,
two leaves in a sudden storm.

Everything spoke in those days:
the motel bathrooms with their infinite mirrors,
the curtains behind curtains, the neon signs,

the names of small towns and highways
that we rolled around in our mouths
as they shrank in the rearview mirror.

We were going to the sea,
where we’d watch each wave as it crashed.
We’d stay in the water all day if we wanted,

or we’d stay dry and never go in,
and the high thin cries of the gulls
would flash down like distant lightning,

and the shells that emerged from the surf
would be all rounded edges and nothing sharp
and too small to make us stumble.

We thought we were held by the music,
but all along it was something else
swimming just below the surface.

We divvied up the roles we’d play, and she got
the howling and screaming and storming around
the rooms and I got the quiet stoic grim face
with crying in the shower and the car, and we
stuck to those all that time through good and bad.
The windows were black squares
and the floor sometimes squeaked and complained
and the lawn went from flowers to leaves to flowers.
She had the best lines, she got to yell
in the middle of the night, something I’ve never done
and will never do; I’m too used to this way,
too accustomed to sitting on the sofa,
looking at the mantelpiece, its collection of curios,
grouped in threes, and twos, and ones.
I could move them around, introduce them into
new arrangements, but what’s the use.
I should have done more yelling when I could,
when I still had a chance, but it’s stupid
and sad to do it now. She’s been gone for years
but I still hear her wailing around the corners
of the house, and then I come close
and press into the cold windows,
moving past my reflection to the deep place
where we’re frozen together, she with her face
lined with shock and me balancing
on the balls of my feet like a tight drum,
the same thing beating at us both.

She is ignorant and admits to being
easily confused.

She tells her jokes with a cheerfulness
that shows how lost she is.

I want to help her and teach her how
the world works,

and I love this feeling of knowing
so much more,

but it also makes me hate her
a little more each time,

each time she admits she’s having trouble,
is helpless to assist,

like a mother of grown children,
who see her now

as someone who offers only facts
from the news,

a weather report or a small repertoire
of songs and stories,

like the mother I may become,
sitting and nodding

as if I understood the talk,
chiming in

and coming to attention
when my name is spoken.