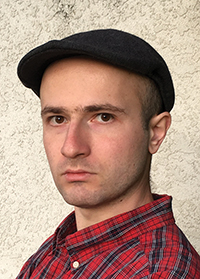 David Garyan received an MA and MFA from Cal State Long Beach and published three chapbooks with Main Street Rag. He recently placed poems in The American Journal of Poetry, along with an essay on why creative writing programs may not be the best way to develop talent. He still lives in Los Angeles, but, fortunately, he has never felt the urge to buy meals from a food truck or acquire a pet in order to feed it organic cuisine. He prefers baggy jeans and poetry that suffocates the skin.

“My life is a supermarket full of choices, but what I want is not in stock,” writes David Garyan in (DISS)INFORMATION, a book stocked solid full of musings about life in the information age. Fake news, consumerism, lack of privacy, the erosion of inner peace are all on the shelf, and though at times this book may leave you feeling uneasy about the state of the world, you can rest-assured the state of poetry is just fine. ~Clint Margrave, author of Salute the Wreckage (NYQ Books, 2016) and The Early Death of Men (NYQ Books, 2012)

David Garyan’s (DISS)INFORMATION is a penetrating, eloquent, passionate broadside of immediacy, whose power conjures familiar voices in my head. I hear Whitman, Nikki Giovanni, Patricia Smith, Amiri Baraka, and Emerson. David’s vision is on point and it reverberates powerfully. David has, in a very powerful and poignant way, added his voice to the assembly of voices that try to understand this world and our devastation of it, and, too often, of ourselves. This book is a profoundly independent call in the midst of the crowd. Don’t miss it. ~John L. Stanizzi, author of Sundowning (2019), Hallelujah Time! (2015), After the Bell (2013), Dance Against the Wall (2012), Sleepwalking (2008), and Ecstasy Among Ghosts (2007)

A Metaphor is Fake News
A simile is like fake news.
—Metaphor

Humans who drop bombs
are the ushers of democracy.
Humans who drop bombs
are like the ushers of democracy.
The bombs will always fall
because we weren’t guilty
of inventing gravity.
Even the cosmos was born
from an explosion—
we’re only to blame for the literature.
Human nature is an old violin
strung with saints’ hair
and played in a chamber of skeptics.
Hope. Hope. Hope.
Hope is acute, like an insight,
yet hope is also acute, like an illness.
Hope is obtuse, as in narrow minded;
hope is also obtuse—more than 90 degrees.
But how many different triangles
do you need to prove that three angles
always add up to the same despair?
Hope is the freedom to draw three sided squares.
Hope is like the freedom to draw four sided triangles.
Dear humanity, our philosophy is a million
blank papers inside red
envelopes falling on Damascus.
Our crisis is an Inuk
who sees palm trees in his dreams.
Hope. Hope. Hope.
We have walked a long way
on the treadmill of reason
to avoid making pilgrimages.
Please, America, don’t invent
missile-proof houses and deploy
humanitarian forces to build them
in war zones so everyone can live
happy lives under your air strikes—
just stop dropping bombs.

Humans can’t tear away from screens.
The “like” button is a simile for danger,
but the real world is danger.
Danger is a person who thinks
he’s safe at home.
The person who thinks
he’s safe at home
is a public library that doesn’t lend books.
If you never leave the house—
a bookshelf holding lots of knowledge
can still fall and cause problems.
A bomb is a book.
A bomb is like a book.
A book is like a bomb.
A book is a bomb.
Our crisis is an Inuk who sees
palm trees on the screen;
scholars say this can’t be a crisis
because it all depends on how we define
crisis. Is it good? Is it bad?
It’s all relative and they urge
people to think with extreme caution:
When the Inuit see palm trees on the screen,
they aren’t really seeing palm trees
because you can’t, in fact, claim to have seen
things when you’ve only seen them on a screen.
Have you truly seen the horrors of Vietnam
after watching them on TV?
Would you claim you saw the Mona Lisa
after looking at pictures on the internet?
Seeing isn’t seeing.
Seeing isn’t like seeing.
Yes, the Inuit can’t be terrified
of palm trees on the screen
because they have no right
to claim they ever saw them.
Hence, Alaskan Natives
shouldn’t be afraid of giving up their land
because we need more space to build
bombs, planes, and factories.
We need more global warming because
the population is growing and Antarctica
is still too cold for palm trees; Denmark
is making good progress,
but Arctic Norway is still frozen.

Our crisis is an Inuk
who sees palm trees in real life.
The scholars are now confused,
but lawmakers aren’t afraid yet.
The Russians sold Alaska for pennies on the dollar,
and Alaskan Natives will give up winter,
just like they gave up their land—
from palm tree to shining palm tree.
Winter is simply bad for business.
Winter is a job-killing regulation.
Winter is a ski resort,
and ski resorts are like the arts in public schools.
We must cut the arts to make sure
kids get more math and science.
Statistics and science show that our kids
are behind in statistics and science.
Math and science are nuclear bombs and, therefore, important.
Ski resorts aren’t nuclear bombs and, therefore, of no use.
We must cut winter or America’s assets will freeze.
1) The greenhouse effect should be outsourced
to all Arctic spots on the planet.
2) Still, we can produce
good global warming right here in the States—
Americans are tired of overpaying for heating.
More jobs, more nukes, more take-home pay.
3) We must sign the North American Global Warming Agreement (NAGWA);
global warming should freely move
across the borders, but the Inuit must be restricted.
We all know the price of global warming
only depends on the free market.
We all know fossil fuels aren’t the problem.
Black Tuesday didn’t affect the USSR
because they had no free market,
yet fossil fuels burned and burned.
Russians without warm clothes
confirmed that communist Siberia was the coldest
place without capitalism.
If fossil fuels caused global warming,
the Cold War could’ve never happened—
gas, coal, and oil powered the arms race
but the political climate only got colder and colder.
So, to sustain global warming, we must remove
all Arctic tribes;
then, we must establish free markets in Siberia
that retain warm relations with other markets.
If Russia hacks global warming again,
communism will rise and flood the market.
Everything will be free,
except the freedom to leave—or travel abroad.
Remember how good it was? The food was free
because there was no food to buy;
you could always travel abroad—
if you never wanted to come back.
When the jig was up and the walls fell,
a curtain of global warming descended across the continent.
“Don’t be coldhearted,” they said. “Put food on the shelves,
then make sure no one can afford it. Give them freedom
to apply for visas, then reject all applications.”
A good capitalist knows that poverty
is more humane than hunger.
A good capitalist knows that actual walls
tear people apart, not lines on a map.
Lines on a map are good metaphors for walls.
Lines on a map are like good similes for walls.
Borders are abstract and walls are concrete;
together they form great poetic devices
that keep people apart.
A wall is a dam that restricts the flood of migrants.
A wall is like a dam that restricts the flow of migrants.
Hope. Hope. Hope.
Hope is a white wall with a white door
to which you don’t have the key,
but if you find the door and pick the lock,
armed guards are waiting on the other side;
they’re paid well to watch the border.
Your only hope is to bribe them.

Our crisis is an Inuk
who can’t say “snow” in his language.
A palm tree is a Christmas tree.
A palm tree is like a Christmas tree.
Rich people buy palm trees on Christmas;
the poor must settle for cacti.
If a Christmas tree fell in the USSR,
where no one could celebrate Christmas,
did it make the sound of “Jingle Bells?”
Gravity says yes, because gravity never dies.
Gravity never sees the gravity
of the situation.
Gravity doesn’t call for help
when there’s no one to hear it.
Gravity is a person who falls
off buildings without a parachute
and doesn’t make a sound.
Gravity refuses to slow down with age;
it’s wise—like an old professor.
Bombs still fall according to gravity’s laws,
but now they’re bigger and stronger.
Never fear—gravity knows what to do with bombs;
if such physics don’t suit you, take your pacifism
to the moon and let’s see how long you’ll last—
no one dies because no one’s there,
and bombs don’t fall because lunar gravity is lazy.
Gravity is the cruelest thing on earth.
Everyone who jumps off a building
gets treated exactly the same.
Gravity must be controlled by the Communists.
The Russians have hacked into America’s gravity.
For some reason, the rich no longer fall
slower when they jump off a building.
Nyet, tovarish polkovnik! Everyone gets the same ration!
America will solve the world’s gravity problem
with her entrepreneurial spirit—
luxury parachutes for the rich.
The ACLU is outraged.
Everyone should have the right
to fall off a building without dying—
life, liberty, and the pursuit
of falling off a building without dying.
America will help Africa end its gravity problem.
We’ll drop ten million emergency
parachute kits over the land
using our state-of-the-art parachutes,
which must be returned ASAP.
Gravity doesn’t cost America a thing.
Gravity is like global warming; we can use
as much as we want and it will never run out.
A good capitalist knows that gravity
isn’t responsible for falling wages
or rising temperatures.
A good capitalist knows that gravity
is only responsible for the fall of the USSR.
The gravity in Antarctica is the same
as the gravity in Syria, but Antarctica
needs air strikes
to become a summer resort,
while Syria is already too hot.
Gravity knows that every city must fall.
Gravity doesn’t care that New Orleans
will be the second Atlantis.
Gravity is a foreign threat to America.
America must invade the Democratic People’s Republic of Gravity
to make the world safer,
but New Orleans must sink—
we’ll never forget! Semper Fi!
We’re not savages like the Ancient Greeks—
we’re ushers of democracy.
We’ll let New Orleans fall,
but our history books will know where it sank.
Hope. Hope. Hope.
Hope is a dead metaphor.
A dead metaphor is melted snow.
Melted snow is water.
Water is profit.
Profit is about staying above water.
Dear members of the United States Congressional Capitalist Party (USCCP):
California will soon be Atlantis 3,
except the Sierras and Cascades.
Dump your underwater homes
before the market literally floods.
People in Nevada are partying like its 2999.
Let’s take full advantage and stimulate the economy.
Let’s sell ocean-front houses to Nevada and Arizona.
Californians have enjoyed
this luxury far too long.
Idaho has bought rain checks
from the feds
to get property rights.
By nature, the flooding
should’ve surged to Utah,
but Idaho lobbied Congress
to divert the water at taxpayer expense.
The other states get free
potatoes in exchange.
Europe thinks 49 states struck a great deal—
Idaho taxpayers won’t live to see
the coast, but the other states
get their potatoes now.