Do You Know this Type of Tree 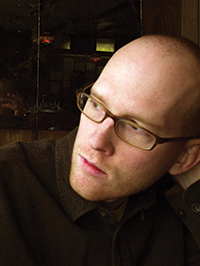 Andrew Ruzkowski lives and writes in Chicago. His poems have appeared or are forthcoming in Columbia Poetry Review, Limestone, [PANK], Midwestern Gothic, The Seattle Review, Permafrost, Arsenic Lobster, Switchback, and Third Coast, among others. He has been nominated for two Pushcart Prizes, a Best of the Net award, and was a finalist for the 2012 Atlantis Award and the 2012 Kay Murphy Prize for Poetry.  His debut chapbook, A Shape & Sound, is available from ELJ Publications.  He also serves as the reviews editor for Poets’ Quarterly, and as a poetry editor for Black Tongue Review.

This debut collection of poems by Andrew Ruzkowski is extraordinary work. It has the feeling of having emerged as a practice, as a way of being in the world. And so the epigraph from Larry Eigner—“. . . a poem can be assay(s) of things come upon, can be a stretch of thinking”—is no mere ornament but rather a disclosure of deep kinship, a kind of dialogue, between these two poets. Ruzkowski is part of a life-line of poets who actually see things and who actually listen. This book is unusually supple and rich with, by turns, discursive freedom and lyric integrity (“the sound sitting there feral in deep persistence”). At once intuitive and intellectually probing, the poems are in the world and the world is the stuff of the poems. With regard to the whole gigantic life of poetry, Ruzkowski points to what’s possible, which is nothing less than what is necessary. “Let’s compound this thing so large,” he says, and does. Yes, let’s.  —Lisa Fishman

For the world we keep

here in this field

I do mind the space

Look at a quiet puncture in the dark telling

I looked at it & turned to see the source

We focus this primacy on broken dirt

the sound sitting there feral in deep persistence

There are many surfaces

There must be facets &/or some connection

whether small or smaller balancing a space

let us into your house

Let’s compound this thing so large

The number of windows in this space is multitudinous

Their surface uneven or bowing or

I am caught in the face of objects

On the walk we talk incessantly of fruiting bodies

& tree sexes or the lack thereof

Must have or be near a source of water

Have you seen this tree

Of course you have

Come into the world

The flowers are arranged in catkins produced early in the spring

The mausoleums are massive in concrete & marble

The global economy of fisticuffs

Out the window to look at a wheel turning

each spoke catching light in a way woven

The habit of dreams

What do you remember about how you got here

What is your name

Do you know this type of tree

make the Catalpa quite easily identifiable

in ranges & directions & what we see

put me to bed

the river in the road

Where did you come from

How did you arrive

Calendula for the face & body

picture on the wall

So many songs & beasts through

& the rain has come pelting