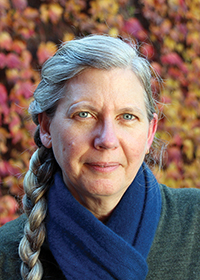 Mary Buchinger (Bodwell), author of two collections of poetry, Aerialist (Gold Wake, 2015) and Roomful of Sparrows (Finishing Line, 2008) grew up with five brothers on a small family farm in the thumb of Michigan, served as a Peace Corps volunteer in Ecuador, and earned a doctorate in applied linguistics from Boston University. She is President of the New England Poetry Club (founded in 1915 by Robert Frost, Amy Lowell, Conrad Aiken) and Professor of English and Communication Studies at MCPHS University in Boston, Massachusetts. Mary lives in Cambridge with her husband, sons, dog, and cats; her website is www.MaryBuchinger.com.

Gathered under the transcontinental title einfühlung/in feeling, these poems serve as attestations to borders crossed, to exterior and interior landscapes spanned. Whether charting Michigan fields, cafés of Vienna, or the mountains of the Andes, Mary Buchinger is a dauntless traveler, unearthing extraordinary narratives buried deep within these terrains—carefully drawing up and out the details embedded in emotional and intellectual maps. Here is a veritable book of journeys. In it, Buchinger engages in the best kind of cartography. —Danielle Legros Georges, Poet Laureate, City of Boston, Author of the Dear Remote Nearness of You

I/ too am nothing/ but an ecstasy made/ of webs, writes Mary Buchinger, and the poems in einfühlung/ in feeling explore the delicate filaments that connect the past to the present, the self to the world. These poems grapple with the complexities of empathy and the realization that there is no recipe for transcendence. And yet Buchinger’s unflinching insights lead us to something even deeper – what it means to reconcile what is/ to what was/ to find the divine/ in change. —Ben Berman

November ninth,
four inches fresh snow—I’ll never forget
the white against the black.
It was a bad fall, awful late for harvesting,
things were tense,
the beets, black, rotting,
and then the snow.

They kept the men at the fairgrounds,
next to the sugar factory, barbed wire all around.
Army truck drove up our long lane at home,
twenty-five P.O.W.s piled out and one puny U.S. soldier
holding a little pistol. He didn’t speak a word of German,
shivered in his thin wool army coat.

The old soldiers, family men in their 40s and 50s,
talked with Dad, different dialects, but they understood
each other, told where they were from, what they did
before the war. The young ones, a couple years older than me,
were mean, high and mighty—Nazis,
wouldn’t look at us, wouldn’t say a word.

My mother fixed potatoes and sauerkraut,
huge chunks of homemade sausage.
They could’ve made trouble for us,
it was late to get those beets in.
There were two brothers, the Weisses,
one fed the men well and got good work,
the other gave them just a bucket of warm water,
always regretted it.

Those beets had to get to the factory.
Already lifted, winnowed into rows,
they had to be knocked together hard,
by hand, to get the dirt off,
then each one topped
with a topper—sharp,
like a machete.

I was seventeen, worked beside them;
snow falling on our shoulders.

A gusty wind blows snow
from the east, from the north
then back from the east.
The snow is confused, he says,
(beat) sometimes we are too.

Where better to look for the self
than in that snow, wind’s prey,
swirling, resting for a moment
on the narrow elbow of a maple
before it’s found out, whisked
away in a wispy puff toward
a locked-arm stand of firs.

Yesterday he looked out
on dirty banks of brittle ice
melting along the roadside
and said, Last call for winter.
Today, oohing over whiteouts,
he wonders what month we’re in,
what this window’s strange offering.

You want your life so you cross
leaving the impossible known

You dream then dream again It seems
feasible—sustenance safety peace

Something whole
It shouts to you across the distance

What did birth tell you?
Ensoulment and Consequence

When the earth was drowned
there was an ark

The unsheltered died
They say God was regretful

One star slung low catches your eye
To whom does the star belong?

In the quiet of this caravan
children beside you invent a song:

Life Life on the other side