Earth Inside Them / Steve Broidy 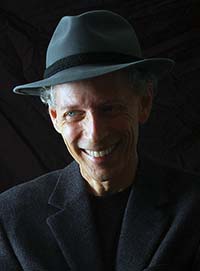 Steve Broidy is Emeritus Professor of Education at both Missouri State University and Wittenberg University. He is Editor of and contributor to From the Tower: Poetry in Honor of Conrad Balliet (Main Street Rag, 2016). With his wife Susan, he lives in rural Southwest Ohio. His poetry has appeared in The Midwest Review, Dark Matter, The Resurrectionist, Amethyst Review, Allegro Poetry Magazine, and other venues.

Steve Broidy’s collection of poems Earth Inside Them contemplates Midwest farm life and its connections between “lonely, teeming barn / and unbearable light.” It likewise explores both the beauty of “prophesying water” and the dry land in which a farmer and his wife dig “because / there was not yet earth above them.” In short, the speaker of these poems mirrors the earthy, honest voice of the Midwest itself, tenderly detailing how he “shape[s] new dreams / from the failure of the old.” –Julie L. Moore, author of Full Worm Moon

In Earth Inside Them, Steve Broidy tells a generational story of farm families. It is a moving story of hard work, caring, and love of the land, of people who kept on planting crops despite drought and other adversities because “it was what they knew, because / they had never learned to stop.” Broidy uses stunning metaphors—children “swirl across the floor / like ribbons and torn paper in the gust / from an opened door”—and his imagery has the spare, magical resonance of haiku. We all have farmer ancestors, so this is our story as well as his, and no one tells it better than this fine poet. Earth Inside Them is inside all of us. –David Lee Garrison, author of Playing Bach in the DC Metro

In Spring Calf and Prom Time

Monroe comes in again to try the john,
but it’s no use:
his daughters, or a flock of sparrows,
are chattering in the bath.

He thinks about his blackened hands,
the planter spread in pieces
through the yard. Time,
he speculates, must flow at
different rates on either side
of a bathroom door.

He hears his spring calves calling,
hungry in their dusty stalls,
and knocks again.

Girls burst out in clouds
of powder, blushed and brightened
by the heat. Laughing
loudly, shying from
his greasy clothes, they pose
on graceless heels.

He shuts the bathroom door
against them, cracks the rueful
grin he saves for Holstein
calves’ first reckless romp
in blooming pasture.

The room is dark and close;
the voices fade. He calculates
the help he’ll need to lead
them to the field; the time
he knows he’ll steal again
to watch them shine in hot
May sun: young, and dumb,
and freshly painted.

In a Dry Time

With a line from Paul Celan

They were on the febrile edge of age:
last year the flu, a new knee for him;
another muddy growth cut away
from her face. And now the drought—
since May not a shower. The mummied
cornfield, stiff and wizened, rattled
in the raving wind. Mare’s tail and thistle
smothered the beans. Their bees scraped at blossoms
burned and barren, foretelling winter
death of hives.

But there was earth inside them, loamy
and deep. And they dug: He hauled
himself into the old Farmall to bury
the crop, slice and break the gasping
ground once more, dust of failed fields
rising to heaven like souls fled
from their clay.

With hope he sowed the wheat; but she
pried up the failing okra, tomatoes; pulled
the dead dill and withering sage.
Kneeling on the stadium pillow
she kept from her son’s last season, years gone,
she shaped the holes for the fall broccoli,
seeded the new rows of lettuce and kale;
poured the water, spread blankets of soil
with gentle care.

Because it was what they knew, because
they had never learned to stop; because
there was not yet earth above them,
they dug.

A Call from an Old Girlfriend, After Many Years

Jackie? Of course; I remember you,
As fondly as I do
My hair.

I see yours clearly—raven, sleek,
Even now as we speak,
After long years.

I can almost feel again your heat
Against my Olds’ back seat—
If I dare.

And also feel, as of old—
Hard, unforgiving as winter’s cold—
Your mother’s stare.

Both of you flung another man’s bid
In my face—so quick to be rid
Of our too-slow affair.

And now, you say, it’s over. I am so
Sorry. And it’s good to hear your voice again.
You know, of course, I’m married now,
My kids all grown and fled?
Oh yes, my brother would have told you that
When he gave you my new number.
I’ll remember to thank him (the rat)
When I see him in December.

Goodbye. I won’t pretend regret
For choices made when I was yet
A foolish boy. But hear me:

I will turn our happier days
In my mind like warm pages
In my book of cares;

A book whose mistakes I can’t repair.