This manuscript was selected for publication after finishing as the first runner up in the 2006 MSR Chapbook Contest. 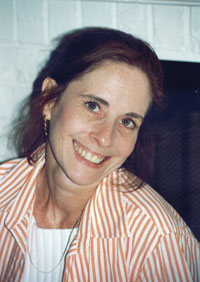 Elizabeth Harrington has a Ph.D. in psychology and works at a market research firm in New York. She grew up in Oklahoma, which is the emotional and physical setting for much of her poetry. Her poems have appeared in several journals, including: The Hudson Review, Field, Nimrod, The Sun, Rattapallax, The Paterson Review, and The Spoon River Poetry Review.

She was a winner of the Allen Ginsberg Poetry Award (granted by The Poetry Project, Passaic Community College), first runner-up in the dA Center for the Arts Poetry Prize, and a finalist in Comstock Review’s Muriel Craft Bailey Award, and in The Ledge and Grayson Books poetry chapbook contests. She is included in an anthology of poems about divorce (“Split Verse: Poems to Heal the Heart”).

Elizabeth Harrington’s poems shimmer with the heat of an Oklahoma landscape
where “our first lover is like summer/though we don’t know it yet”. At times, they
read like a memoir but are more melodic. Family, fatherhood, and in particular,
the death of her stepfather are themes she traces in this work of mourning but
also wonder. With startling grace, honesty, and sometimes even humor,
she is able to capture the uncanny quality of loss.”

Elizabeth Harrington’s poems are clear-eyed, tender, ironic bits of Americana, both realistic and hallucinatory. Portraits of pure physicality — sweat, lemonade, and agsoline in a small Oklahoma town — become over the course of his lovely book, mapping one woman’s life, ethereal visitations. I love in these poems the acute rendering of individual moments, the slippages in time, and the loss of bearings amidst which the reader places herself with surprising accuracy.

Elizabeth Harrington’s poems are full of small epiphanies, bringing readers to see life anew, both its minor and major episodes. Written with a rare freshness of vision, wisdom and clarity, her work is at once narrative and lyrical, possessing a metaphoric gift that is truly a wonderment. The appealing beauty of Elizabeth Harrington’s voice will make you gasp with pleasure as it uplifts your heart and breaks it. It is an inimitable voice like no other in poetry.

I am nearly new. You are nearly a doctor
bending over my crib,
my baby brain sniffing you out.
You’re my me, my not me,

my orange neck and eyes blinking
everywhichway through glass. I imagine you
with your shirt open–nothing hotter
than Houston in July–

or in one of those sleeveless
T-shirts men used to wear in the 40’s.
You pat my belly round as bread.
You would slice it to make me laugh.

My lungs are starting to function.
Yours have a gun at their back.
You must have whispered.
Were you warm against my ear,

my heart popping its brand new beat?
I would get it back if I could: a gasp,
a suck, a song of lakey syllables. The likely
laughter, your footsteps fading down the hall.

Might as well bang a soda machine for lost coins.
You were no sooner thought
than gone-my unready eyes losing you
before learning you by heart.

All day I’ve been making bad change
at the firecracker stand, adding up sparklers,
snakes, and roman candles on brown paper sacks,

snapping them open with a quickness
that exceeds my accuracy.
Customers have complained.

And though logic won’t, I know, be served,
I work even faster
my heart fierce as slaughter

as when I’m after something I think I want.
At the moment, it’s to slake my thirst.
Unable to leave the stand unattended, I sit

in a folding chair watching cars
pull up to a drive in across the street, poke elbows
out of Fords, Buicks, one grass-green sedan

with a winged Mercury sparkling on its hood,
and order what they will. I thirst for just one sip
from the tall mugs hugging frost

against their sides, for the sudden confusion
of ice cubes, for the dark splash
against a parched throat.

But mostly I thirst for what I am not,
for what I lack, the cool drink of mind
that produces the right answer every time,

this thirst, this yearning a lone note
that whistles through me
like breath across an empty bottle.

There are times when something in us rises.

and you hear the sky peppered with birdsong
and you ascend. Briefly, yes,
but wonderfully, forgetting even the mortal blister on your left heel.

Some believe that god is not above us
but within us. Is us.

If so, I picture luminous strands of DNA, our personal deity,
resembling nothing so much
as a bright ribbon twisted into the double helix.

There are times when the heart is an empty house
with no one at the window.

You notice an ant making its wobbly way
across the kitchen floor and wonder how such a small soul
could brave such a long journey alone.

The cat circles the dent in your pillow
and lowers herself inside its round warmth
as if she were inhabiting a halo.

And you take the found world inside of you
and you make wings of it.