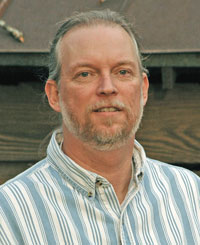 Kevin Winchester teaches Creative Writing and is the Director of the Writing Center at Wingate University. He earned an MFA in Creative Writing from Queens University and won a 2005 Work-Study Scholarship to the Bread Loaf Writer’s Conference. His work has appeared in several literary publications including Tin House, Gulf Coast Literary and Arts Journal, Story South, and Southern Hum. His writing may also be found in Main Street Rag’s anthology Everything But the Baby and the Novello Press anthology Making Notes: Music in the Carolinas.

Kevin Winchester’s writing reflects a strong knowledge of all the great Southern writers and storytellers that have come before him and the tradition they’ve established, but his voice is all his own. Unique, funny, heartfelt, an honest depiction of the world, his Southern world, as he sees it. His voice is one to join that long tradition of Southern writers, and rightly so.

~ Ron Rash, author of the Pulitzer nominated novel One Foot in Eden and Serena.

The All American Interactive Zen Museum of the New South

Yeah, my name is Tarleton Sizemore, but you can call me Toady. Been called that since I can remember. Pull up that chair yonder and I’ll see can I fill you in. When you first asked me, I didn’t think I could narrow it down, let alone account for everything. Then it come to me. They’s one day that sticks out in my mind. And I tell you, it’s a wonder weren’t nobody killed. I can give you my notion of what led to it all, but keep in mind it ain’t just the one event. I see that now. They was plenty else going on that you got to factor in to get the whole picture. But this one event is what I’m saying kinda stands for most everything. It’s come to me over the years; just having the picture ain’t enough. Having it don’t mean you really see it, you know? That takes some time, what they call perspective. Still and all, my account’ll frame everthing in good as any.

It was about the middle of June, not too hot this particular day. As I recall, it was a fine morning, that Carolina sky blue as a robin’s egg, nary a cloud that might’ve foretold what was about to happen. I’dve understood it had it been late July or August, that’s when the sky around Prospect goes kinda off-white, the sun more a suggestion than something you can really see, and the humidity’s so heavy you can’t think. No telling what’s liable to happen then.
I didn’t have much lined up for the day, so I headed down to Roger’s Barbershop, figured I spend a couple hours shooting the breeze with some of the fellers. I managed to kill most of the morning, then Earl Ray come in and after a spell, we went to get some lunch. We’d come out from the diner and was just standing there on the sidewalk when everything started to come undone. And it was a sight. Like I said before, it was a wonder weren’t nobody killed, but still and all it near about represents everything before and after concerning Prospect.

I’ll tell you this first off, if you stand back and look at things from a distance, it’s just plain as day, and it proves Seldom Turnbull was on to something, just like it proves my theory on how everything is all connected somehow. Like how you, how anybody, ends up wherever they are is all cause of one thing meeting up with the other. Folks don’t think on it much cause it scares ‘em, I reckon. See, whether you turn right or you turn left don’t matter none cause once you set out, alls that can follow is what comes natural according to your choice.

Took me a while to figure that out. See, that’s what you call a Zen moment, coming to that realization. Admitting I ain’t the brightest light in the hall, just an old Alliance County redneck, but somewhere along the way I figured the universe don’t do much adding or subtracting on its own. Everything’s connected somehow and when one thing is taken away from one spot, then another thing naturally will appear in another spot. But if you gone give any credit for my figuring this out, I reckon it ought to go to Seldom Turnbull and his All American Interactive Zen Museum of the New South. He ain’t said word one about it, probably don’t even realize the role he played in me coming to this realization, or his position in what all’s happened in Prospect—course I reckon you figured out Seldom weren’t gone give you much to go on, or else you wouldn’t uh come all the way down here talking to me. But that day he come through town everything seemed to come in focus for me. And to look back, everything’s always a right turn or a left, ain’t it? And the road always leads right to where you are, so I reckon it’s all those little turns what brought me here. The straight-aways—hell, that’s trained monkey driving; it’s the curves what make you grab the wheel with both hands. That’s my theory, anyway.

You know, this might take a spell. Hang on and I’ll go get us a couple of Red Stripes.