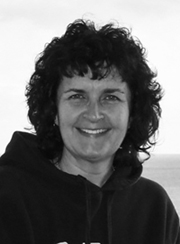 Terri Anastasi was born in Western Pennsylvania before it became a notch in the Rust Belt. She attended the University of Albuquerque where she was editor of the college literary magazine. After graduating with a Bachelor of Fine Arts degree, Terri worked as a supply clerk, cashier and bartender, among other jobs. She earned a master’s degree in art psychotherapy, working in mental health until 1995 when she relocated to Raleigh, North Carolina, to make a career in child welfare.

Savior in the Steel Mill

I grew up believing
the Lord worked in the mill
alongside my Granpap
and heard His name
sprinkled throughout conversation
like Frank’s RedHot,
my Pap giving Him credit and blame
for every damn thing
from “God bless America, we got a raise!”
to “Christ Almighty, what next?”

Forget about sandals,
I imagined Him wearing steel-toed boots
and a hardhat to cover His halo.
Despite His penchant for wine
I knew He drank coffee from a thermos
and ate salami sandwiches and Twinkies
from a metal lunch bucket just like Pap.
Of course He shared a pinch of snuff
with the fellas in the blast furnace
and waved from the crane
as they bellowed below
“Jesus H Christ, it’s hot as Hades down here!”
He musta smiled to Himself thinking
if they only knew.

nightfall imminent but she hadn’t far to go,
thoughts of what needed tending at home,
icy air circling her, she wrapped tight the scarf,
hurried round the bend, through a dark wood,
near the clearing, he watched her,
knew she was distracted, caught her off guard,
a beast behind her, he wanted her to sense to fear to wonder,
him easily overtaking her, an animal running her down,
nipping at heels, teeth flashing in moonlight,
torn hamstring ripped cloak, hot breath on her throat,
buried beneath fur a heartbeat sounded,
she curled against his body, suddenly strangely warmed,
her voice like shattering crystal across a midnight sky,
stars splintering as heaven moved her to tears,
she melted him softly, his mercy surprising,
she was released, reluctantly free,
deciding he spared her when he never intended her harm,
only wanted to possess her, the look in his eyes,
her hunger as much as his that kept her out late,
kept her returning each night thereafter to the edge of a dark wood…

I think about her all the time
never met anybody like her on Skull Island
and she brought out a tenderness in me
that I didn’t know I had
just ask the natives.

It didn’t work out
cuz we had aircraft and bad press against us
not to mention logistics,
turns out size does matter
really, I coulda killed her
if we ever tried to get together
you know what I mean
but I had my way with her just the same.

Years from now when she’s misplaced
the memory of you as easily as her reading glasses
just hearing the name “Kong”
will make her smile
and she’ll remember my dark good looks
‘til the end.

Don’t believe everything you see in the movies
I’m misunderstood and missing that girl
every single cinematic day.

Who you callin’ a fuckin’ monkey?