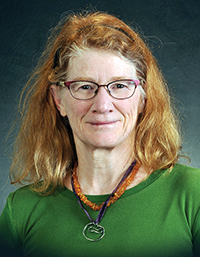 Deborah H. Doolittle, born in Hartford, Connecticut, has lived in lots of different places before finally settling on Jacksonville, North Carolina, as home.  She has an MA in Women’s Studies and an MFA in Creative Writing and teaches at Coastal Carolina Community College.  Two chapbooks, No Crazy Notions and That Echo, won the Mary Belle Campbell and Longleaf Press Poetry Awards, respectively. She shares a house with her husband and their rescued cats, the exact number of them is constantly changing.

In Floribunda, Deborah H. Doolittle makes poems sing. Her poems dig deep into botany and history, revealing how allusions and symbolism can texturize and hold new meaning. In these lines, Doolittle pays homage to a diversity of poets, fiction writers, essayists and transcendentalists; she helps us to see flowers in a new light. This book is full of specificity, full of music, and full of intelligence, showing how poems blossom with skill, grace, and passion. ~Lenard D. Moore, Associate Professor of English, University of Mount Olive, and author of A Temple Looming

I have always enjoyed Deborah’s delightful and clever way of seeing: perceptive and precise as an X-acto knife. She commands the sound and movement of language with exceptional skill, can find the just-right word every time. Her vocabulary is immense, but not pretentious. Her talent shines (I could have said blooms) in this one-of-a-kind collection of poems. Floribunda is playful and mature, also scholarly. It’s a rich book worth adding to ones treasures. ~David Lavar Coy, poet, former Director of Creative Writing at Arizona Western College

Tiger. Lily. Part beast, part spark
of light, all flower, prowling
my garden all day and night. How
could I best trim your symmetry?

Which leaves to strip? Which leaves
to keep? How long to measure
out the stem? How may I adjust
your lovely lustrous head?

With what scissors, with what shears,
with what sharp-edged knife
could I engineer your lusty shape,
and make a gift for Mrs. Blake?

When she wipes away her tears
and smiles to hear our neighbor’s
children at work and play, will she
see what I see: Flora’s own fauna?

Part tiger, part lily, this fire flower
that stalks the jungles of my garden,
that daunts even the honey bee,
now dare I trim your symmetry!

Dylan Thomas’ Portrait of the Artist as a Dogwood

The tree itself was neither young nor old,
being slender and infinitely thin.
It grew outside his window, though,

reminding him of how his own
lung x-rays hung like a bronchial-branched
tree, when he was neither young nor old.

Throughout the night the dogwood stood
for him, signaling with drooping petals,
a snow flurry outside his window.

Deep in the night, there was that howl,
that rapid yip, yip, yip, which was his cough
that made him feel neither young nor old.

That rough bark chafed against his moans,
his teeth, his lips. The wind that shook the barley
barely shook him, groaning by his window.

What drove his green rage was well-known
and in the charcoal sketch at his elbow
of a tree that was not young nor old,
having grown for some time by his window.

Afterwards, he passed through
the grass as if under water,
the air thick with bitterness and sweat.

In his fist, the denuded stems
of dandelion puffballs looked like shrunken
heads, hard knobs on mangled sticks.

Children he knew blew the seeds
to the wind like pinwheels, like bubbles.
He could only think of paratroopers

gliding behind enemy lines
in the war: while some tried to avoid
the trees, others would aim for them.

Dente de Lion, the French had called them:
teeth of the lion. That was him: Dens Leonis,
both roar and bite, a rustic oracle.

So what was he to do about all
the golden yellow ones strewn across
the lawn like a thousand suns?

He could not amputate each and every one—
though he’d once dispatched a lion on safari—
he could not send all these to oblivion.